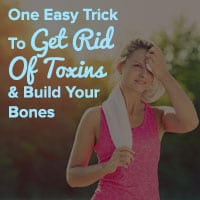 A typical “cleanse” is usually done via the digestive system. But the body has more than one way to rid itself of toxins, and today we’re going to look at an often-overlooked means of cleansing: sweating.

According to research, sweat contains as many if not more toxins than blood or urine, and some toxins “prefer” to exit via sweat.

You may be wondering how you can work up a good sweat in the wintertime, especially if you are like most people and don’t have access to a sauna on a regular basis. The key is exercise!

Today we’re going to explore the research and discover how you can participate in this cleansing process through exercise. We’ll start by looking at which toxins are removed by sweating, and we’ll explore the nature of these poisons and why they are so dangerous.

Researchers explored the excretion of heavy metals from the body in the form of sweat. In those who had a high exposure to one or more of these toxins, their “sweat generally exceeded plasma or urine concentrations,”1 with mercury levels actually normalizing in exposed individuals.

Lead, cadmium, and arsenic all showed similar penchants for expulsion via sweat, leading the researchers to conclude that “Sweating deserves consideration for toxic element detoxification.”1

Sweating definitely deserved consideration, because the toxins in question are absolutely everywhere. You may not realize you’ve been exposed, but as the study authors point out clearly:

Because exposure is inevitable, it’s likely that you don’t even realize the silent havoc they’re wreaking on your detoxification organs (the liver and kidneys), which in turn can damage your bones.

Why are these heavy metals so widespread? It may surprise you to learn all the places these poisons crop up and invade our systems…

I’d like to look at each individual toxin and explore its nature and how it has come to be so prevalent in our environment, beginning with …

The stuff of theatric poisonings, arsenic has a nasty reputation for a reason. Although it is a highly toxic substance, it is used in so many industrial applications – from insecticide to wood preservative – that its presence has become inescapable. Coupled with the fact that arsenic is a naturally-occurring substance, it is present in our most precious resource: drinking water.2

In addition, concentrated forms of arsenic-laced food, such as brown rice syrup, can contain toxic levels of arsenic five times greater than the levels deemed safe by the EPA for drinking water.4 While all types of rice contain some arsenic, organic brown rice has been found to contain the lowest levels.

Arsenic can also be absorbed through the skin, but ingestion is the most common method of exposure.

This is another heavy metal that occurs naturally in the earth’s crust, but that does not mean it is safe. The problem with mercury is that there are so many avenues of exposure: inhalation, ingestion, and absorption through the skin.

Remember the Mad Hatter in Alice In Wonderland? Hat makers had a reputation for insanity, because they were constantly exposed to mercury in their trade.

This illustrates the fact that the body system most affected by mercury exposure is the neurological system. Just breathing the vapor can cause hallucinations, delirium, and psychosis.

The most common mercury exposure is via contaminated seafood, amalgam dental fillings, and some vaccines.

The Flushield by Wyeth-Ayerst is an example of such a vaccine. It contains thimerosal, a derivative of mercury, and almost half its weight is composed of mercury. Most dentists use acrylic fillings now, but the metal used to fill cavities in the past contained mercury.

Because of mercury pollution in the oceans, seafood can contain mercury, with certain types of fish at the top of the food chain most likely to have the highest amounts of mercury.5

Artists will recognize this metal from the paint color “cadmium red.” Art students who use natural pigments are warned against the toxicity of this color, and for good reason. Its toxicity has been well established, and there is no determined safe level of ingestion.

The major means of exposure to cadmium is through conventionally-grown crops, which take up cadmium from soil that has been saturated with phosphorous-based fertilizers, contaminated storm runoff from landfills (which have tons of cadmium-containing batteries), and even sewage sludge. Its use in various industrial practices has decreased over the last several decades, but it is still present in the environment, particularly the soil.

Cadmium is a known carcinogen, can cause renal failure, and damages bone.6 Even low levels of cadmium can cause osteoporosis.7 In addition, cadmium can cause high blood pressure or worsen existing hypertension.8 And if you’re a smoker, your risk of high cadmium levels is greatly increased.9

Lead is one of the better-known toxic heavy metals. When lead contamination is found in children’s toys or other products, it makes headlines. Like the other metals, lead occurs naturally in the earth, but it is very toxic to humans. It damages the detoxification organs (liver and kidneys), and harms the reproductive and nervous systems.10 In fact, it is harmful to all systems in the body. Children are especially vulnerable to the negative health effects of lead, since their nervous systems (and whole bodies) are still developing.

While lead is a systemic poison, the brain is the most vulnerable part of the body to lead poisoning. Lead’s effect on the brain is not unlike that of drug abuse. According to a 2012 study:

“The cerebellum is also a main target of…drug abuse and addiction (such as cocaine, heroin, phencyclidine), and environmental toxins (such as mercury, lead, manganese, toluene/benzene derivatives).”11

Lead can also be present in the glazes of certain types of ceramic cookware, especially glazed cookware from China or Mexico. So look for bone-safe cookware like stainless steel, cast iron, and enamelware to ensure you’re not getting exposed to lead in your food.

It’s Not About Fear; It’s About Being Informed

Please understand that this information about lead, mercury, cadmium, and arsenic is not intended to instill fear. Rather, it’s about raising awareness to the ubiquitous nature of these poisons and the dangers they pose so you can take appropriate action.

That’s where the good news comes in – you can do something about these toxins. They readily leave the body through the sweat glands, which brings up the next question…

Work Up A Detoxifying Sweat While Building Your Bones

Most of us don’t have access to a sauna, one of the most popular sweat-inducing methods. So why not build your bones while working up a good, detoxifying sweat? You can do both with the Densercise™ Epidensity Training System.

And to make the most of your Densercise™ moves, here are some tips for sweating more:

The Bone-Building Workout That Cleanses And Detoxifies

The Densercise™ Epidensity Training System is an exercise program you can do in the comfort of your own home, specifically designed to build bone density in fracture-prone areas. It also helps cleanse your body, protecting your detoxifying organs.

And Densercise™ brings you all the myriad benefits of exercise, such as improved memory, increased energy, improved posture, and better cardiovascular health.

Do you have any tips for maximizing sweat while you workout? Please share with the community by leaving a comment below.

Go ahead and get sweaty!