Osteoporosis Exercises In A Pill? - Save Our Bones

Osteoporosis Exercises In A Pill? 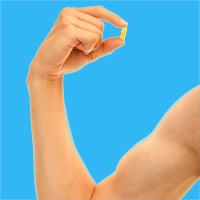 New scientific discoveries can lead to great things, but it’s important to recognize just what the larger purpose is in any scientific venture. Here’s how you can tell the difference: when the purpose of scientific research is solely to create and market new drugs, then that’s a red flag.

Today I am going to share a recent study with you that seems to answer a 200-year-old question: how does bone “know” how to respond to exercise? But the researchers openly acknowledge that the intent of the study was not to provide insight into how the body works; rather, the whole purpose of the study was to develop a new drug.

A Pill to Replace Exercise: Sci Fi or Reality?

It seems like there’s a pill for everything these days, and now scientists are working on developing one that could replace exercise. The intention is to fool the bones of osteoporosis patients into acting as though they are receiving weight-bearing exercise. Why would scientists even want to do this?

It’s because exercise is vital to bone health. There’s no getting around this fact, and since Julius Wolff published his law in 1892, the positive effect of weight-bearing exercise on bone is well-established. Wolff’s Law is discussed in detail in the Osteoporosis Reversal Program, but here I’ll mention the gist of it: bone is living tissue that is created and changed in response to the forces of muscular tension and gravity.

So scientists are looking for an easy way to replace exercise by providing a pill that tricks their bones into regenerating and building. Granted, for those with disabilities, this could be a good solution – if the new drug would not have any nefarious side effects.

But Save Our Bones community members already know that there just can’t be a synthetic drug without dangerous side effects. While this drug is still in the works, you can rest assured that it will have a list of side effects connected with it. (All drugs have an acidifying effect on the body anyhow, whether you experience specific side effects or not.) And it’s more than likely that more side effects will be “discovered” by unwitting consumers of the drug along the way.

How the Exercise Pill “Works”

During their research, scientists discovered the specific mechanism by which bone is built. During exercise, your bone cells experience a flow of fluid. Special hair-like sensors called cilia, located on the outside of bone cells, detect this fluid flow. As a result, an enzyme within the bone cells, adenylyl cyclase 6 or AC6, is “told” to deactivate. The deactivation in turn leads to increase the expression of a bone-forming gene called cyclo-oxygenase 2.1

Researchers reason that if they could produce a drug that would send the right signal to the cilia, it would start the series of steps that lead to bone building. Voila, bones would magically build themselves!

In other words, the new drug will be designed to signal the cilia as if they are receiving fluid flow consistent with exercise… only without the exercise.

The Benefits of Exercise Go Beyond Bones

This bears repeating: no drug is 100% safe, period. But even if this “magic” pill were to trick your bones into re-building and gaining density safely, those who would end up taking the drug would miss out on some of the other benefits of exercise, such as:

There is No Substitute for Real Exercise

The bottom line is, there’s just no substitute for exercise. Regardless of the new drug Big Pharma might concoct, it will never offer the full benefits of exercise.

And now there’s a way for anyone to obtain the benefits of exercise, regardless of age or fitness level. It’s called Densercise, and it’s the exercise program I’ve designed specifically to build bone density. What else does Densercise have to offer, and how is it different from other exercise programs?

And Densercise is currently on sale for 60% off! Click here to get started. →

And remember, keep building your bones!