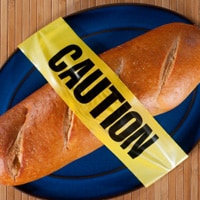 To help stay on the right track with your bone health, it’s important you know not only what helps you; you also need to know which foods you should avoid.

So here are the three foods that literally eat your bones away. Let’s get started…

If you follow the Osteoporosis Reversal Program, you know that all meat, poultry, and fish are acidifying foods. Therefore, you should have them in moderation and in balance with alkalizing foods.

But processed meats or cold cuts – including bacon and the ever-so-popular hot dogs – are the most acidifying of all animal proteins mainly because of a preservative, color, and flavor enhancer commonly used: sodium nitrite. In increasingly rare instances, sodium nitrate is also used, but the end result is the same since it is converted into nitrites by microorganisms present in the digestive system.

Nitrites combine with the amine portion of broken down proteins to form nitrosamines, which are confirmed carcinogens and potent acidifiers.

And the scope of this problem is huge. According to a Public Health Reports article, “About 10 billion pounds of cured meat products are produced annually, accounting for some one-tenth of the American food supply.”1

The main role of sodium nitrate is to prevent botulism, and the fear of contamination is most likely what keeps this product in use to this very day. According to Dr. William Lijinsky of the National Cancer Institute, “the concentration of nitrites in cured meats is much higher than in anything else.”2

Some vegetables, including spinach, beets, radishes, cabbage,and celery to name a few, contain nitrates, both naturally and due to the application of nitrogenous fertilizers. But thanks to the Vitamin C naturally present in vegetables, nitrosamine formation is inhibited.3 The same cannot be said about cured meats, of course.

There are other methods of curing meat as a replacement for sodium nitrate. So make sure you read the labels carefully, and always try to balance these foods with alkalizing dishes.

Sugar consumption in the U.S. has skyrocketed in the last decade, with an average yearly consumption per person of well over 150 pounds a year. All variations of table sugar are acidifying, but the worst offenders are the refined and bleached kind – the most common granular sugar, both white and brown. A variety of toxic chemicals are used to bleach it, including sulphur dioxide and phosphoric acid.

Besides tissue acidification, there are more ways by which this sweet – and extremely unhealthy food – can hurt your bones:

Try to stick as much as possible to honey and Stevia, since both are alkalizing. If you wish to use sugar, then go for brown rice syrup, turbinado raw sugar, or maple syrup. They are less acidifying than ‘regular’ table sugar.

In the Osteoporosis Reversal Program wheat is listed as an acidifying food, but that doesn’t mean you can’t have it. However, I urge you to stay away from bleached flour.

We all know that wheat is not white, yet for some mysterious reason, flour manufacturers seem to think that it should be. So applying their skewed logic, the ‘logical’ solution is to bleach it using toxic and acidifying chemicals such as chlorine dioxide or benzoyl peroxide.

Unfortunately, that’s not all; alloxan is a byproduct of the flour bleaching process. It is a uric acid derivative and believe it or not, alloxan is used to induce diabetes in laboratory animal experiments because it destroys the insulin-producing cells.

As if this were not enough, the milling process removes the most nutritious parts of the wheat berry, so unlike whole wheat flour, bleached flour is just about all made of starch. According to the USDA Nutrient Data Laboratory, in comparison to whole wheat flour, white flour contains approximately:

And guess what: all of these minerals are Foundation Supplements that nourish your bones.

Stick to whole wheat or sprouted bread. You can also try millet bread, which is alkalizing.

So there you have it. Stay healthy, stay informed, and ‘save your bones’.