The Health Benefits Of Quinoa And How It Helps Your Bones 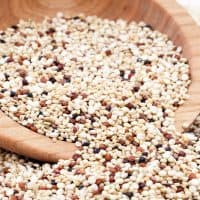 Quinoa is a highly nutritious food that has become increasingly popular over the past decade– and for good reasons. Nutrient-rich, versatile and delicious, quinoa is more closely related to spinach or Swiss chard than to grains like wheat and oats.

In fact, it's not a cereal grass at all, but rather a pseudocereal because the quinoa seeds can be ground into flour and prepared the same way as true cereal grasses, such as rice, millet, barley, and sorghum.

Quinoa is antioxidant-rich, gluten-free, and contains several Foundation Supplements. Plus, it's a complete protein source– making it a valuable addition to a diet low in animal protein– perfect for Savers.

Read on to discover the power of this alkalizing pseudocereal and a delicious and easy recipe that will please your taste-buds and your bones.

The History Of Quinoa

Quinoa was first domesticated for human consumption about 3,000 to 4,000 years ago in the Lake Titicaca basin of Peru and Bolivia. There, it became a staple in the early Andean cultures. Beginning in the 13th century, the Incan Empire, the most extensive pre-Columbian civilization in the Western Hemisphere, considered it sacred. This reverence led the colonialist Spanish conquistadors to dismiss quinoa, even forbidding its cultivation.

But quinoa was too resilient and vital to be routed. Although it took a long time for the rest of the world to catch on, it is now a significant part of diets across the globe. There are 120 varieties of quinoa, but you're only likely to find three of them in the grocery store: White Quinoa, the most widely available; Red Quinoa, which stays slightly firmer after cooking; and Black Quinoa which cooks slower and has an earthy flavor.

Whichever you choose, the seeds of the quinoa plant, small and often translucent, are an excellent addition to salads, a hearty substitute for rice,

The Nutritional Profile of Quinoa

Savers take note, quinoa is a robust source of Foundation Supplements, as well as other bone-healthy nutrients.

The trace mineral and Foundation Supplement manganese is vital for many enzymatic processes. It plays a critical role regulating the thyroid, making it a key player in the bone resorption cycle.1 It's also necessary for the creation of the connective tissue in cartilage and bone.2

In combination with copper and zinc (also found in quinoa), it forms an integral part of Superoxide Dismutase, a powerful antioxidant that protects your bones from the ravages of free radicals.3

Copper is in every tissue of your body, which shows how important it is to your whole health, bones included. As mentioned above, copper protects your bones by its function to synthesize superoxide dismutase.3 A co-enzyme called lysyl oxidase facilitates the process of cross-linking collagen and elastin, but it can’t do it without copper. Collagen and elastin form the bone matrix where minerals are deposited.

Magnesium is involved in more than 300 enzymatic processes and is the fourth most abundant mineral in the human body. That's because it is essential for ATP synthesis (adenosine triphosphate), the cellular energy source that allows your cells to function.4

Magnesium is particularly crucial for glutathione synthesis. Glutathione, the master antioxidant, protects and supports your bones in many ways.4

Additionally, your bones can't absorb calcium without magnesium. That makes this mineral a gatekeeper for bone growth, and a deficiency has been shown to increase fracture risk.5

Also known as Vitamin B9, folate supports bone health by driving the production of glutathione. That same process helps to reduce inflammation by neutralizing the harmful amino acid homocysteine 9

Folate is vital for cellular reproduction and protein synthesis, making it essential for both the construction of muscle and new bone, as well as red blood cell formation and DNA synthesis.

Another trace mineral, zinc enhances the production of osteoblasts– the cells that are responsible for the synthesis and mineralization of bone. That makes zinc an under-appreciated bone-builder, as well as a popular immune booster. Keeping up the immune system by fending off colds and the flu helps to reduce general inflammation and maintain wellness, both of which support bone health.10,11

Quinoa is a source of the antioxidant flavonoid quercetin that has been shown to reduce cortisol levels, thereby protecting your bones.18 It has also been shown to balance blood pressure and support cardiovascular and respiratory health.19

Quinoa is remarkable for its fatty acid content. It's a great source of Oleic Acid, a monounsaturated fat that improves cardiovascular health.12

It's also an excellent source of the antioxidant Alpha Lipoic Acid (ALA). This fatty acid helps synthesize glutathione, increases the cellular uptake of cysteine (a building block of glutathione), resets the antioxidant ability of spent molecules of vitamins C and E. All of these actions protect bone. ALA reduces osteoclast formation, slowing bone resorption, and increasing bone density.13

Protein is required to build muscle, and muscle is necessary to create new bone. It's an easy leap to understand why protein is essential for bone health. By allowing you to build muscle strength, protein lets you unlock the power of weight-bearing exercise to stimulate the production of new bone– as described by Wolff's Law. Additionally, protein works synergistically with calcium to improve calcium retention and bone metabolism.17

There are many sources of alkalizing, non-animal protein, from beans to greens and many in-between, but among pseudocereals, quinoa stands out as a source of complete protein.

Among other functions, fiber has an anti-inflammatory effect. Inflammation increases fracture risk, so fiber can help you protect your bones.6 It also absorbs toxins to help eliminate them from your body. Fiber improves liver health by preventing toxin-laden bile from re-entering the bloodstream near the end of the digestive process.

Fiber's liver-supporting, detoxifying properties help you maintain a balanced pH, which prevents your body from dissolving your bones for their alkalizing minerals.

Other Health Benefits Of Quinoa

Quinoa's bone-building nutrient profile is reason enough to make it a regular part of your diet, and we'll look at ways to do that soon. But its health benefits don't stop there.

Quinoa has been shown in animal studies to lower total cholesterol and help maintain levels of High-Density Lipoprotein (HDL). These results lead to improved cardiovascular health and apply to humans as well. As a good source of fiber and protein, it helps to regulate healthy blood sugar levels, making it beneficial for preventing or managing Type 2 diabetes.20

How To Get More Quinoa On Your Plate

Quinoa is delicious hot or cold, as part of savory or sweet dishes. You can use it in place of rice in a stir-fry or other dishes, and in place of bulgur or couscous in Middle Eastern dishes like tabouli. You can substitute quinoa flour for wheat flour, and you can even get noodles made from quinoa to make heartier pasta dishes.

Here's a bone-healthy quinoa recipe that is sure to please. It's packed with Foundation Foods, and even though it's completely vegetarian, it's an excellent source of protein– thanks to quinoa!

Try out the many uses of quinoa. You can find it at your local grocery store, often alongside other boxed or bulk grains. It's the sort of bone-building wonder-food that you'll find throughout the Save Institute's recipe book Bone Appétit.

Keep up the spirit of culinary adventure by expanding your palate with new bone-building foods!

1 Tomas Landete-Castillejos. Alternative hypothesis for the origin of osteoporosis: The role of Mn. Frontiers in Bioscience, 2012; E4 (1): 1385.