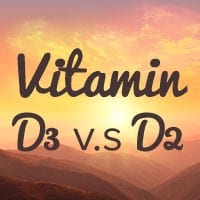 Today I am going to share with you some crucial but little-known information about Vitamin D that your doctor simply won’t tell you.

You see, if your blood test results have shown that you are Vitamin D deficient, chances are your doctor prescribed Vitamin D2 (ergocalciferol) supplements instead of D3 (cholecalciferol).

Today, you’ll learn the difference between these two forms of Vitamin D and why you should take D3 and never D2.

A report published in The American Journal of Nutrition points out the very clear difference between Vitamin D3 and Vitamin D2, the latter, the “form of vitamin D used in major preparations of prescriptions in North America.”1 Vitamin D2 is in fact not the bioavailable equivalent of D3.

“Vitamin D2, if given in high enough doses, prevents infantile rickets and is capable of healing adult osteomalacia. However, the inefficiency of vitamin D2 compared with vitamin D3, on a per mole basis, at increasing 25(OH)D is now well documented, and no successful clinical trials to date have shown that vitamin D2 prevents fractures.”1 (emphasis added)

The study goes on to state that

“… ergocalciferol should not be regarded as a nutrient suitable for supplementation or fortification.”1

Here’s why. There are several biological mechanisms that contribute to the superior absorbability and efficacy of Vitamin D3. In the liver, thanks to a particular hepatic enzyme, Vitamin D3 is more readily metabolized into a bioactive form of D that is easily converted to its hormone form in the kidneys. It takes much longer to make this hepatic conversion with Vitamin D2.1

In fact, D2 and D3 are metabolized so differently that they result in “the production of unique biologically active metabolites.”1

Clearly, these forms of Vitamin D are simply not the same. Hence the study’s conclusion that ergocalciferol should not be used as a supplement.

So Why Are Most Prescription Supplements Vitamin D2?

You may be wondering how Vitamin D2 supplements came to be the mainstream protocol in the first place. We need to go back almost 100 years to find the answer.

Back in the early 1920s, scientists discovered that exposing foods to ultraviolet light produced Vitamin D2. Thus the manufacture of this vitamin was born, and the process was sold to what would become Big Pharma. Drug companies then produced and sold this medicinal form of Vitamin D to the public and to doctors.

Less than 10 years later, around 1930, scientists noticed that Vitamin D2 did not seem as effective in the treatment of rickets in children (the primary use of the vitamin in those days) as the Vitamin D in cod liver oil.

Subsequent studies showed mixed results, and not surprisingly, in 1949 the World Health Organization declared that differences between the two forms are “minimal”. But recent research clearly shows that they could not be more wrong!

The Dangers Of Vitamin D Toxicity

One of the primary dangers of Vitamin D2 is that there is a fine line between an effective therapeutic dose and toxicity. In fact, prescription Vitamin D2 carries a warning that the dosage should be adjusted as soon as there is notable improvement in D levels.

The popular prescription Vitamin D2, Drisdol, carries the following warning (among others):

“Dosage levels must be individualized and great care exercised to prevent serious toxic effects. IN VITAMIN D RESISTANT RICKETS THE RANGE BETWEEN THERAPEUTIC AND TOXIC DOSES IS NARROW.”2

Why risk poisoning when there is a completely safe way to get all the Vitamin D3 (not D2) you need? We’re going to discuss that in a moment, but first I would like to briefly review…

Why Vitamin D Matters For Your Bones

It’s well-documented that Vitamin D is essential for the proper synthesis of calcium, and it’s been shown to greatly reduce fracture risk in two ways. First, it helps with the formation of stronger bones; second, Vitamin D actually helps improve balance and prevent falls by enhancing muscle contraction.

For rejuvenating your bones, it’s vitally important that you avoid Vitamin D2, and choose a bioavailable form of this important vitamin to avoid deficiency.

If you live in an area where it’s difficult to get sun exposure or if you can’t spend 20 to 30 minutes outdoors a few times a week, then you should be taking at a minimum 600 IU of Vitamin D3 or cholecalciferol daily. But to achieve and maintain desirable levels, I recommend taking 2,000 IU once a day. Don’t worry that you may have too much Vitamin D if you also sunbathe. Remember that there’s no risk of overdosing from the sun.