These 4 Bone Damaging Foods Attract Mosquitoes And Their Diseases 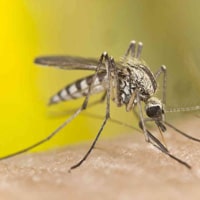 We all know that mosquitoes are one of summer’s biggest nuisances. Their bites not only cause intense itching, but they can also carry various diseases.

In fact, chikungunya, a mosquito-borne disease that causes fever, joint and muscle aches, and headaches has recently spread to the USA (more on this later).

To keep these annoying insects at bay, you may think you have no choice but to douse your skin with toxic acidifying insect repellant.

Fortunately, it’s not so, because today you’ll discover an easy, non-toxic way to lessen your chances of attracting mosquitoes without using any sprays, lotions or creams.

Spending Time Outdoors Is Good For Your Bones

Summer is a welcome season of warmth and sunshine, when you can be active outdoors. It’s the perfect time of year for engaging in your favorite bone-building, weight-bearing activities. And getting the sunshine provides the Vitamin D your bones need.
Unfortunately, being outdoors also exposes you to annoying mosquito bites.

The Dangers Of Mosquito Bites

Mosquito bites are more than just a nuisance. Mosquito-borne diseases include:

Obviously, the best way to avoid contracting these diseases is to avoid exposure to mosquito bites. But before you reach for chemical repellents that are full of bone-damaging toxins, consider using natural or homemade mosquito repellents which can be remarkably effective. I've shared my favorite homemade formula with the community in a previous post.

In addition, there are other non-toxic, natural things you can do to keep mosquitoes from being attracted to you.

Turn Off Mosquitoes By Avoiding These 4 Foods And Beverages

Did you know that certain foods and drinks can make you more appealing to mosquitoes? As incredible as this may sound, this is true, and you should avoid eating and drinking them while outdoors (especially in the evening when mosquitoes really get active).

You probably noticed the prevalence of lactic acid in the list above. It’s a substance your body produces not only when you eat certain foods. Lactic acid also accumulates in the bloodstream when you exercise.

During physical activity, the need for energy increases. Glucose is broken down and oxidized into a substance called pyruvate, which produces lactate at a rate so rapid your tissues can not break it down fast enough. Thus, lactic acid begins to accumulate in your tissues and is secreted from your skin, attracting mosquitoes.

Aside from weight-bearing activities, Savers can do the Densercise™ Epidensity Training System outdoors, since it doesn’t require any special equipment. But during the hot, mosquito-intensive days of summer, exercising indoors may be a better idea.

Or make sure you wear light colors (dark-colored clothing attracts them), avoid the above foods and beverages, and spray on a natural repellent before engaging in outdoor exercise.

Other Factors That Attract Mosquitoes

In addition to eating certain foods and being physically active outdoors, there are other factors that determine how appealing mosquitoes find you.

For example, larger people tend to emit more carbon dioxide than those of a smaller build.

As noted above, dark clothing – especially dark blue and black – also increases your chances of attracting mosquitoes, as does the quantity and type of bacteria present on your skin. And finally, genetics can’t be ruled out as a major contributing factor to mosquitoes seeking you out.

How To Accelerate Your Bone Density Increase In A Toxic World

While avoiding chemical “bug sprays” to protect your bones and your health is a step in the right direction, toxin exposure is inevitable. Your neighbors may spray pesticides on their lawn, or you might work in an office where they spray air freshener all the time, to give a few examples.

Also, air pollution from car exhaust, cigarette smoke, “outgassing” from synthetic building materials, and so forth creates another avenue for toxins to enter your body and increase the workload of crucial detoxifying organs, such as your kidneys and liver.

The bottom line is that avoiding toxins to the best of your ability is not enough to ensure your bones can thrive and maintain or increase their density.

To really give your bones the boost they need to increase density and strength, and to accelerate your bone density increase, a periodic body cleanse is crucial.

OsteoCleanse™, the 7 Day Bone Building Accelerator is designed to do just that.

OsteoCleanse™, the 7 Day Bone Building Accelerator, is a comprehensive but simple cleanse that shows you how to rid your body of environmental toxins and even osteoporosis drugs in just seven days, helping your bones remodel more efficiently.

It also maximizes your kidney function, ensuring more efficient pH-balancing so your bones can retain the calcium they need to become strong and stay fracture-free.

With six easy steps, OsteoCleanse™ clearly explains exactly what you need to do to accelerate the bone-building process in just seven days, while giving your bones powerful antioxidants and bone-nourishing nutrients derived from foods.

If you haven’t checked it out yet, please click here to learn more about this quick, simple, and extremely effective cleanse.