This World Renowned Doctor “Gets It” - Save Our Bones

This World Renowned Doctor “Gets It” 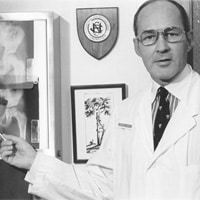 The best recommendation my doctor had for me was to drink milk and take Fosamax.

Those are two things I wouldn’t wish on anyone who is actually dealing with, or in fear of osteoporosis or even osteopenia.

Luckily, there are some doctors who “get it.” They haven’t fallen for the slick marketing of the drug companies who really would lose out big if people discovered real and safe alternatives to their drugs.

Dr. Salter, a world renowned Orthopedic Surgeon, professor, author, and scientist, was one of these doctors who “gets it.” I wish I had been cared for by someone like him.

But as fate would have it, we would end up meeting… but under much difference circumstances…

Today I want to tell you a story about a very well known doctor, Dr. Robert B. Salter.

Now Most People Will Probably Not Recognize His Name

Despite his many accomplishments… despite his naming as one of the 10 most outstanding scientists of the past 80 years… despite his induction into the Canadian Medical Hall of Fame.

Dr. Robert B. Salter, who passed away in 2010, was everything my doctor wasn’t when I was diagnosed with osteoporosis.

Dr. Salter was smart, he was open-minded, and best of all, he wasn’t brainwashed by Big Pharma. He couldn’t have been, and you’ll see why in just a moment.

When I was first told about my osteoporosis, I began a period of intense work (you are very motivated when your health is in jeopardy) and research that led me through hundreds of journal studies and other medical research.

I slowly found the truth I needed to avoid the dangerous drugs and strengthen my bones the natural way. Those countless hours of research saved my health, preserved my future, and eventually became the foundation for the Osteoporosis Reversal Program.

A Tragic Loss Brought Us Together

I will never forget the email I received a few years ago. This will probably surprise you as much as it surprised me back then: it was from Robina Salter, Dr. Salter's wife.

She reached out to me because her sister had succumbed to the ravages of osteoporosis, and worse, she had suffered horrendous side effects from the drugs she had taken to “cure” it. I was heartbroken to hear her very sad story.

Robina was – and still is – mourning the loss of her sister. But now, as she looks into the future, she knows that an osteoporosis diagnosis doesn't have to destroy lives. And she hopes that what happened to her sister will never, ever happen to anyone else.

Since then, our friendship has blossomed. Soon after she contacted me for the first time, I submitted the program for Dr. Salter to review, and here was his reply:

“Having read the excellent program entitled, The Osteoporosis Reversal Program by Vivian Goldschmidt MA, I am pleased to recommend it as essential reading for all persons involved with preventing and treating osteoporosis.”

I tell you this because osteopenia and osteoporosis are serious. And if you attempt to deal with them according to the recommendations of Mainstream Medicine, there’s a good chance that you will suffer.

And I don’t wish that for anyone. My diagnosis experience was awful, and I consider myself lucky to have found the natural solution early on.