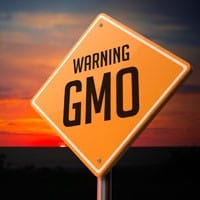 Chances are, you’re familiar with GMOs (Genetically Modified Organisms) – crops that have been altered at the genetic level to exhibit certain characteristics, such as pesticide or herbicide resistance.

Today I reveal four hushed-up ways that GMOs can damage your bones and your general health, all backed up by scientific studies.

We’re also going to dig deep into Monsanto’s Roundup (glyphosate) and the genetically modified crops that resist this harmful herbicide.

But first, let’s take a quick look at GMO crops and how they came to be developed.

Genetic modification is nothing new to botanists and plant scientists. Long ago, researchers learned to cross-pollinate and hybridize plants with desirable characteristics to produce higher yields and more flavorful crops. But the modern genetic modification of crops is something entirely different.

Genetic modification in today’s sense means putting genes from one species into an entirely different species – such as injecting goats with spider genes so they will produce milk with a protein so strong, it can be used like Kevlar in industrial manufacturing; or injecting tomatoes with fish genes so they will resist freezing temperatures. Rice has even been injected with human genes to produce seeds that contain human immune system proteins, which are then used to manufacture and develop drugs.

It’s really bizarre, frankly. And it has massive implications for your health.

At the fundamental level, GMOs were developed to save time, effort, and to increase crop yields, but the terrible health consequences were obviously ignored. I’ll explain.

Conventional farmers typically apply weed killers to their crops, primarily Monsanto’s Roundup. One of the problems with this approach, of course, is that this poison kills more than weeds; if the crop sprayers are not careful, the weed killer destroys the crops, too.

To combat this problem, scientists made genetic modifications to various crops so they would become resistant to the active ingredient in Roundup: glyphosate.

Now farmers could spray these “Roundup-ready” crops indiscriminately, applying weed killer to the entire field. Of course, this means Roundup ends up on the crops themselves, and ultimately on your plate.

The health consequences of GMOs go beyond the presence of a lethal poison on your food (more about that in a moment). But the GMO foods themselves can cause catastrophic health problems, such as:

The Dangers Of Roundup (What They Won’t Tell You)

In the past, Monsanto went to great lengths to “prove” the safety of Roundup. But the evidence is impossible to ignore: the main ingredient in Roundup, glyphosate, is anything but safe.

Research has revealed the toxic nature of this chemical. It is harmful in four key ways, all of which have been scientifically proven.

When a substance is “estrogenic,” it means it has qualities like the hormone estrogen. A 2013 study reveals something ominous: glyphosate stimulates the growth of human breast cancer cells.

It does this by activating estrogen receptors and altering their expression, indicating that:

This estrogenic effect is especially worrisome when it comes to soy

“…the use of glyphosate-contaminated soybean products as dietary supplements may pose a risk of breast cancer because of their potential additive estrogenicity.”1

Unfortunately, nearly all soy crops in the U.S. are GM, which means they are routinely sprayed with Roundup.

2. Glyphosate Depletes Your Body Of Important Minerals Via Chelation

The Save Our Program emphasizes Foundation Supplements, which are vitamins and minerals that are crucial for the rejuvenation of bone and the reversal of osteoporosis. And the preferred method of getting those nutrients is via good quality supplements and food…non-GMO food that has not been sprayed with Roundup, and here’s why.

A groundbreaking report explores multiple studies on plant diseases resulting from Roundup use, and reveals that even minute amounts of glyphosate greatly inhibit the ability of plants to take up micronutrients (especially iron, manganese, and zinc) from the soil.2

Manganese and zinc are both Foundation Supplements, and are required for healthy bone growth and rejuvenation.

Glyphosate depletes minerals by chelation – a process whereby the chemical binds to a nutrient, preventing its synthesis and absorption. As a result, the nutrient-starved plants are more prone to disease, and of course they do not offer the nutrients our bodies need.

The report notes that:

“Glyphosate can tie up minerals for years and years, essentially removing them from the pool of nutrients available for plants, animals, and humans.”2

Clearly, this is not a problem with a “quick fix”, so you should avoid genetically modified foods.

The human gut is home to a vast number of microbes, and they are absolutely crucial to your bone health (and your health in general). Scientists are beginning to unravel the complexities of the brain-gut connection, and they are learning more about why and how these microbes are so often imbalanced. One key element is the use of glyphosate.

A 2012 study, where researchers used chickens to discern which bacteria are resistant to glyphosate, and which ones succumb to it, concludes that

“The use of glyphosate modifies the environment which stresses the living microorganisms… ingestion of glyphosate could disturb the normal gut bacterial community,”3

Unfortunately, the dangerous pathogenic bacteria, such as various Salmonella and Clostridium species, resist glyphosate; but beneficial bacteria, such as Bacillus badius, Bifidobacterium adolescentis, and Lactobacillus spp. are susceptible to it.

The study further notes that the rise in C. botulinum-mediated diseases could be attributed to the toxic effects of glyphosate, because beneficial bacteria that “fight” the pathogenic C. botulinum are being destroyed by Roundup.3

In other words, glyphosate kills good bacteria while the bad bacteria are unaffected, setting the stage for pathogenic bacteria to gain the “upper hand” and cause disease.

The liver is one of the body’s primary detoxification organs. One of its most important jobs is to remove toxins from the blood, and it does this through a complex series of enzymatic processes. According to research, glyphosate interferes with this vital process on a fundamental level.

Glyphosate inhibits the main detoxifying enzymes collectively named cytochrome P450 (CYP), thus contributing to the chemical’s toxicity. Not only does glyphosate present its own dangers; but by “tying the hands” of your detoxification system, it opens the door for all sorts of food-borne chemicals to run rampant in your bloodstream, causing untold damage.

Recent research reveals how, when glyphosate interferes with CYP enzymes, it acts in synergy with amino acid biosynthesis in the gut (enter good gut bacteria again) and impairs the serum transport of sulfate.

“Consequences are most of the diseases and conditions associated with a Western diet, which include gastrointestinal disorders, obesity, diabetes,heart disease,depression, autism, infertility, cancer, and Alzheimer’s disease.”4

The sad irony is that the very foods you take into your body in the name of health can actually be making you sick. But consumers are becoming more and more aware. Foods with the “GMO-free” label are selling like never before, and sales of organic produce are on the rise.

And here’s another irony: non-GMO, organic foods play a key role in detoxifying your body.

It really is amazing how important your liver is. As we saw in the studies above, when its detoxification abilities are compromised, your entire system suffers…and so do your bones. In fact, a functional liver is absolutely key in the fight against osteoporosis.

You see, when your liver is working properly, it prevents bone-damaging toxins from acidifying your pH and therefore weakening your bones. It creates a more alkaline environment, so healthy bone remodeling and building can take place, and you can build your bones faster.

This is why a periodic cleanse is so important. Cleansing allows your liver to “let go” of the toxins and process them so they can be excreted via the kidneys. It’s like hitting the “re-set” button on your body’s detox processes, and it does not have to be difficult or complicated. The Osteoporosis Fresh Start Cleanse: The 7 Day Bone Building Accelerator is just that: simple, effective, and, since it lasts just one week, it works quickly.

The Osteoporosis Fresh Start Cleanse is based in foods, pure water, and even breathing techniques that have been scientifically proven to cleanse and alkalize the body.

In fact, not only is the Osteoporosis Fresh Start Cleanse easy to follow; it can even be enjoyable, because you know you’re doing the best thing for your bones and body – and cleansing makes you feel younger and more energetic.