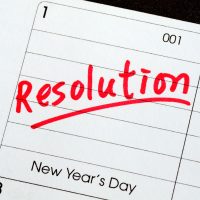 The New Year is the perfect time to make bone-healthy resolutions, like starting a bone-building exercise regimen or a pH-balanced diet. While we certainly have the best intentions, it’s not a secret that more often than not we end up dropping them.

Yet research shows that making New Year’s resolutions actually gives us a better chance of keeping them. So don’t let the fear of “falling off the wagon” keep you from making resolutions in the first place.

Let’s start with the research showing why “resolvers” are more likely to keep their resolutions than “un-resolvers.”

Researchers studied two groups of demographically similar people, both of which wanted to make changes in their lives (such as exercising more or giving up smoking). One group made clear and specific resolutions, whereas the other group did not.

When scientists followed up with both groups six months later, they confirmed something amazing: 46% of the resolvers had kept their resolutions, compared to just 4% of the non-revolvers.1

There must be something about the act of making a resolution that helps us keep our commitments. In fact, it ties in with the psychology of resolutions, as do the following seven tips for keeping yours this year.

Seven Tips For Sticking To Your New Year’s Resolutions

Think for a moment about your daily habits, such as washing your hair, brushing your teeth, or walking your dog. Do you have to motivate yourself to do them? Most likely, you do these things without really thinking about them, and that’s the key.

When an action becomes a habit, it seems effortless. It can take some time for a new action to become a habit – starting with small changes is a good way to begin. But once it becomes something you “have” to do, it doesn’t occur to you to do otherwise.

2. Make A List That Includes A Plan For Dealing With Temptation

It’s inevitable that temptations will come along as you make an effort to keep your resolutions. To help overcome these moments, it helps to see your commitments on paper along with an “escape plan.” So a good idea is to write a list of your goals along with a brief reminder of temptations and how you’ll handle them. Here’s an example.

Let’s say someone is trying to cut back on bone-damaging cola, but they find themselves tempted to drink colas at work, especially in the afternoon when they lack energy. They might write something like this:

-Drink only one cola a week. Bring healthy drinks to work and an energizing, healthy snack for the afternoon.

That kind of list addresses the reality of temptation and suggests a way to overcome it.

3. Don’t Be Too Strict – Keep It Realistic

You probably noticed that the cola example above reduced the amount of cola to once a week, but did not obliterate it entirely. That’s because for many people, giving up all of something all at once can set up for failure. It’s a much more attainable goal to reduce the consumption of cola to once or even twice a week instead of drinking it every day.

Notice how relatively small changes can make a big difference – that means only eight colas in a month (if drinking two a week) instead of thirty per month.

When you’re planning your resolutions, it’s a good idea to do so well in advance. Spontaneous, spur-of-the-moment resolutions made at midnight on New Year’s Eve are more likely to fail.

If you haven’t made your resolutions by New Year’s Day, don’t worry; just take your time and make a well-thought-out list, and get started a week or two later. That gives you time to consider temptations and escape plans, as we discussed in #2 above, and it also gives you a chance to assess the pros and cons of your resolutions.

5. Be Kind To Yourself

There is no need to beat yourself up if you find yourself challenged by keeping your resolution. Instead, if you “miss the mark,” take the opportunity to re-evaluate and consider what changes you need to make in order to meet your goals.

Perhaps you need to make more incremental changes, or maybe some things just aren’t working the way you thought they would and you need to be a bit more flexible. Once you re-evaluate, make a new list with more doable resolutions, and you will be off and running again. You can do it!

6. Reward Yourself When You Succeed

Celebrate your successes, even the small ones. Make sure your reward does not go against your resolution, however. It would be a bad idea, for instance, to reward yourself with a milkshake if you’ve resolved to stop drinking milk.

An alternative idea would be to get a good blender so you can make bone-smart, delicious smoothies instead. Or perhaps you can treat yourself to a movie, a dinner out, or even a special gift like a pretty candle or houseplant. Regardless of what you choose, the action of self-reward is important to keep your motivation strong.

7. Keep Track Of Your Successes

Each time you reach a goal or keep a commitment, or practice a healthy new habit – no matter how small – make a note of it. If your goal is to lose 25 pounds, don’t wait until you’ve lost all 25 to take note. Instead, when you lose five pounds or even one pound (whatever a realistic goal is for you), write it down and celebrate!

Have Faith In Yourself!

Too many people won’t make resolutions at all because they just don’t believe in themselves. But the fact is, many people do keep their resolutions, and are happier and healthier because of it. There is no reason you can’t be one of those people!

Remember, it’s okay to start small – in fact, it’s better. Even very small changes can make huge differences in your health and life. You are capable of forming new habits that will become second nature. And with the thriving Save Our Bones community, you have access to lots of support to help you through.

As the New Year begins, I want to thank you for being an integral part of the Saver community — I couldn't do any of this without you.