Boniva Side Effects - Save Our Bones 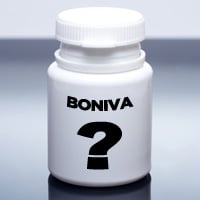 When your doctor wants to prescribe an osteoporosis medication such as Boniva, does he or she take the time to warn you about Boniva’s side effects? It’s always interesting to me the way some doctors tend to be so heavy-handed in prescribing medications for osteoporosis. Because they see osteoporosis as a disease, they want to ply their patients with the “cure,” and as soon as possible. This is not necessarily a bad motivation; but it gets tense when doctors don’t take the time to discuss side effects and won’t listen to their patients’ legitimate and well-researched concerns about the side effects of osteoporosis drugs like Boniva.

Yes, we’ve all seen Sally Field’s smiling face, touting the drug like it’s the best thing that ever happened to your bones; but if you’ve read my post, ‘Boniva: What if Sally Field Told the Truth?', then you are ahead of the game. Just because a celebrity endorses a product doesn’t make that product perfect, or even good for you!

The fact is, Boniva has some nasty side effects that bear pointing out and/or reiterating. I also want to take a look at the active chemical compound in Boniva.

There’s always bad news when it comes to the side effects of Boniva (and just about any drug intended to correct a problem that can be alleviated through natural means). You really don’t have to look far for some of these side effects and adverse reactions – they’re right on the label of the drug. Here are just some of them (there are too many to list all of them here):

More severe possible side effects include:

These are bad enough, but there are more. Some side effects are more insidious. You have to dig a little deeper to find the long-term side effects that Boniva can cause. I’ve already done some digging and posted the results here, in ‘Osteoporosis Drugs: the Shocking Truth'. The evidence is clear: oral bisphosphonates like Boniva have the potential to cause great damage to your body, including your bones.

That’s right – Boniva, despite its name and reputation, can actually cause brittle, dry hardness in your bones. According to research, the femur seems to be the most susceptible to damage due to brittle hardness. The jaw bone becomes susceptible to damage in another way – ample research connects Boniva with osteonecrosis of the jaw (osteonecrosis is bone death), a nasty bacterial infection of the jaw bone.

The active chemical compound in Boniva is a substance called Ibandronate Sodium. If you take Boniva out of the equation for a moment and just look at the chemical substance, you’ll find some rather alarming information. Because Boniva has cornered the market of Ibandronate Sodium so that it’s inevitably connected to the drug name, objective information on this chemical is hard to find. But sites like ClearSynth.com and Lookchem.com simply present information on the identification and proper handling of chemicals, and Ibandronate Sodium is included in their list. While both sites note that Ibandronate Sodium is not officially classified as a “hazardous substance,” they point out first aid measures to be taken if the chemical is inhaled, touched, or swallowed. For instance, ClearSynth classifies Ibandronate Sodium as “harmful if swallowed” and advises that ingestion and inhalation be avoided. Lookchem advises washing Ibandronate Sodium off the skin with “soap and plenty of water,” and to use water to rinse the mouth of an unconscious person who has ingested it. Apparently, sites like these didn’t get the “hush-hush” memo from Boniva.

And Last, the Good News

There is good news! There’s good news even if you are taking Boniva already and suffering side effects. There’s good news if you’ve been diagnosed with osteoporosis and have reservations about taking the drug. The good news is this: there’s an all-natural program called Save Our Bones that is effective, safe, and scientifically proven. Regardless of where you are on your bone health journey – whether you’re focusing on prevention or reversing an existing condition – there’s no need to dread or suffer the side effects of drugs like Boniva. The Osteoporosis Reversal Program can help you avoid Boniva’s dangerous side effects and build and strengthen your bones naturally.