Taking Evista And Boniva - Save Our Bones 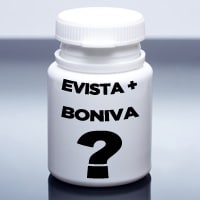 Many osteoporosis patients find themselves taking Evista and Boniva even if they have reservations about these drugs. Maybe it’s because their doctors said things like this:

“If you don’t take Evista, your bones are going to get so brittle you’ll get fractures just going up stairs.”

“There are no natural alternatives to Evista. so this is your only alternative.”

“If you don’t take Boniva, you’ll end up hunch-backed due to weakened bones.”

“The tests show that you have osteoporosis. You need to take Boniva to increase your bone density.”

Has your doctor ever said anything like this to you? These are common scare tactics that practitioners of mainstream medicine often use to intimidate their patients into taking osteoporosis drugs. The best way to avoid this type of scenario is to arm yourself with knowledge. So read on!

Hormones: The Good, the Bad, and the Misunderstood

It’s popular to blame hormones for all kinds of things. Women may say we’re “feeling hormonal” during certain times of the month, and men might blame hormones for their “wandering eye.” We talk about hormones as if they are bad, or some kind of unwelcome chemical we wish would leave us alone. But hormones are very important body chemicals that are crucial for your overall health. All body systems, including your skeleton, are affected by hormones.

So let’s get a grasp on the place of hormones in osteoporosis. When we’re young and producing relatively high levels of sex hormones, the bones absorb minerals readily and release them slowly. The cycle of tearing down and building up is normal; estrogen binds to receptors in bone, inhibiting bone-destroying cytokines found in osteoblasts. When estrogen levels drop after menopause, the bone-destroying inhibitor is decreased, leading to an imbalance in the bone regeneration cycle. Research also suggests that low levels of sex hormones in men also result in osteoporosis.

So why not just replace the missing estrogen? Sounds simple, right?

Not really. Replacing the body’s “missing” estrogen with a synthetic version like Evista can bring about a host of unpleasant side effects. You can’t just plug in something artificial and have your body treat it like a natural hormone. Evista is a selective estrogen receptor modulator (SERM), and it doesn’t even act like natural estrogen in the body. Instead, it selectively “chooses” some tissue in which to act like estrogen while neglecting others.

While there are some natural adaptogens – in other words – “estrogen-like” herbs and foods that bind very loosely to estrogen receptors in cells, there is a big difference between those and Evista. Because natural adaptogens only increase the estrogen effect of a cell if the body needs it.

Evista also increases the risk of blood clots and stroke, which is a tendency among synthetic hormones (birth control pills also increase the risk of these problems). Hot flashes have also been reported by women taking Evista.

Boniva’s side effects and dangers are, thankfully, becoming more and more well-known. You can read about them on this site in posts like ‘What if Sally Field Told the Truth?' and ‘Boniva Side Effects'. Nonetheless, despite mounting evidence of the dangers of both drugs, physicians have been known to prescribe both Evista and Boniva to be taken as part of an osteoporosis treatment program. Of course, I would never recommend taking even one of these drugs, much less both of them together. Both of them would be working their own form of imbalance in your body, causing a total disruption of equilibrium. The legion of side effects can only be imagined!

With its threats and fear tactics, what mainstream medicine is forgetting here is that menopause and a decrease in estrogen is a natural process. That’s one of many reasons why a natural approach like the Osteoporosis Reversal Program makes sense. It’s a matter of bringing things back into balance, not treating a disease.