Latest Study On Meat And Cancer: Fear-Mongering Or Truth? - Save Our Bones

Latest Study On Meat And Cancer: Fear-Mongering Or Truth? 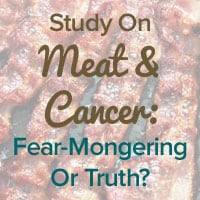 A brand new study by a World Health Organization agency published in the Lancet Oncology links cancer to the consumption of red and processed meats. In fact, researchers have just placed cured meat products like salami and bacon on the list of carcinogens along with tobacco, asbestos, and diesel exhaust.

Is this correct? Should we shun red and processed meats for good?

In today’s post, we take a close look at the research and tease out what this latest report means. You’ll also learn about a seldom-mentioned drug fed mainly to hogs, but bacon lovers, don’t despair: I share a delicious meat-free “bacon” recipe as well.

The Role Of Meat In The Osteoporosis Reversal Program

There can sometimes be confusion about the role meat plays on the Program. Some vegetarians and vegans wonder if meat is required as part of the pH-balanced nutritional plan, while some omnivores are concerned that they’ll have to give up meat altogether.

The truth lies somewhere in the middle. Meat is certainly not required for the Program, but it’s not necessary to give it up entirely, either.

In short, if you eat a great deal of meat, you’ll be cutting down (but not stopping) meat consumption when you follow the Program; and it’s fine if you don’t eat meat at all.

That said, I want to point out the difference between healthful meats and unhealthful ones before we get to the study.

Some meats are Foundation Foods in the Osteoporosis Reversal Program, such as liver, fish, beef, and turkey. These contain valuable bone-building nutrients as, for example, CoQ10 and zinc (there are non-meat Foundation Foods with these nutrients as well). Natural, free-range, grass-fed poultry and beef are nutritious bone-healthy foods (albeit acidifying), but if you’re a vegetarian, you can still get those nutrients from other sources.

In contrast, processed meats like bologna and hotdogs and cured meats like bacon and salami fall into a different category. These kinds of meat products are not Foundation Foods.

We’ll get into more detail about this later, but for now, it’s important to bear in mind the basic differences between these types of meat when assessing this new report.

What The WHO Report Says

Based on around 800 studies, the report concludes that processed meats should be classified among top-tier carcinogens like asbestos, cigarettes, and arsenic.1 They claim that eating 50 grams of processed meat a day (that’s about three slices of bacon) increases bowel cancer risk by 18 percent.

That’s not all. The report also links unprocessed red meat (such as steak and roast) to cancer, adding them to the second tier of carcinogens that includes glyphosate, the weed killer used in Roundup.

At face value, this sounds like pretty scary stuff. And it’s certainly true that processed meats are not good for bones. But it’s important to expose the flaws in this report, beginning with the WHO’s failure to take into account…

The researchers did not acknowledge the overall lifestyles of the meat-eaters who developed cancer. Yet this is important.

None of this was taken into consideration in the WHO’s assessment.

For example, health-conscious individuals who adopt the Paleo diet may eat as much meat as an overweight couch potato, but those on the Paeo diet are likely taking much better care of themselves overall (and eating healthful meats) than the couch potato who eats hamburgers, hotdogs, and bacon.

The WHO lumps these individuals into one group, and then came to the salient conclusion that meat eating increases the risk of cancer.

Association Is Not Causation

While there may be an association between meat eating and cancer, there is simply not enough evidence to definitively say that meat causes cancer. The fact remains that there is no data to support a continuous, linear increase in cancer rates that correlate with meat consumption. Rather, study results on this topic have varied significantly, with some studies actually showing a decrease in colorectal cancer among red meat eaters.2

In addition, the types of cancer (rectal vs. colon) and cancer rates themselves vary among men and women, with conflicting results (why would red meat consumption lower the risk of some types of cancer while increasing others?).3

More About Processed vs. Fresh Meats

Savers are well aware that cured and processed meats are bad for bones. With few exceptions, they contain sodium nitrite, a flavor and color enhancer that kills bacteria associated with food poisoning (namely botulism). The sodium nitrite is converted to carcinogenic nitrosamines in the digestive process.

But the researchers apparently did not consider this or the presence of another harmful, toxic substance in meat: ractopamine.

Drugs In Your Meat

A drug called ractopamine, a beta-agonist, is regularly fed to pigs (and less often to cows) for several weeks before they’re slaughtered. Its purpose is to boost muscle weight, but it causes severe health problems in the hogs before slaughter: broken bones, hyperactivity, and even death have been reported.

Ractopamine is found in highest proportion in pork products, particularly bacon and ham, which are, of course, among the “cured meats” cited in the report.

It seems that the researchers failed to consider the possibility that meat itself is not so much the problem as what is added to it in processing.

Corruption In The World Health Organization

We should always take the WHO’s recommendations with a grain of salt. As far back as 1995, the WHO was excoriated by an article published in the British Medical Journal as a corrupt and inefficient organization.

Even The Lancet has criticized the WHO, saying that it “has lost virtually all the public health impetus that it enjoyed 10 years ago.”5

Here’s a more recent example of corruption in this organization. The WHO’s top advisor on influenza, Professor Albert Osterhaus, has earned the nickname “Dr. Flu” for his role in the H1N1 flu “pandemic” of 2009, and for personally profiting from the sale of vaccines – a clear conflict of interest.

Should you stop eating all meat? It’s a matter of balance. If you like red meat, then by all means include it in your diet in moderation and in the right balance (around 20% since it’s an acidifying food) as explained in the Osteoporosis Reversal Program. A quick note here about quality: try to get natural, organic, free-range, grass-fed meats whenever possible.

You can also add some vegetarian meat substitutes to your diet, as in this scrumptious “bacon” recipe below (which includes a recipe for a soy sauce substitute as well).

This vegan bacon substitute is acidifying, but since it’s intended to be served more as a side rather than a main dish, it’s easy to balance it with alkalizing foods.

Take The Worry Out Of Healthy Food Preparation!

It’s easy to worry if you don’t know which foods could damage your health and your bones. For that reason, the recipes featured in Bone Appétit, the Save Our Bones cookbook, have been carefully researched.

And if you’d like to taper down on meat consumption and make sure you’re eating bone-healthy meals, Bone Appétit can really help you. While meatless dishes like Vegetarian Chili, Vegetarian Broth (which you can use as a base in many other recipes), and Let It Bean Salad are found in different sections of Bone Appétit, there is also an entire chapter dedicated to vegetarian entrées, with lots of recipes for delicious meat-free dishes.

Like all sections of the Bone Appétit recipe book, Vegetarian Entrées features Quick Picks, a collection of recipes that can be prepared in 20 minutes or less, yet they still have the same bone-smart nutrition as all the other recipes.

Please note that Bone Appétit and all the included bonuses are only available as a digital download, so you’ll get instant access and there are no shipping costs.

Regardless of the latest “food news,” vegans, vegetarians, and meat-eaters can all enjoy delicious bone-smart dishes with Bone Appétit.