Rebounding: Good Or Bad For Your Bones? - Save Our Bones

Rebounding: Good Or Bad For Your Bones? 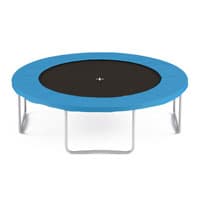 Is rebounding good or bad for your bones? This is a question I’ve been asked a lot and today I’m thrilled to answer it and explore its effects on both your bone health and overall health.

Rebounding is an exercise that consists of bouncing lightly on a small trampoline, either with the feet remaining on the surface or with small jumps up to around six inches in height. People do the exercise in their homes or at gyms, typically for anywhere from a few minutes up to 15 minutes or more per day as a substitute for other types of exercise.

What Are the Benefits of Rebounding?

There isn’t a lot of research on rebounding, and the science is not ultimately decisive about its benefits relative to other forms of exercise. The primary focus of many proponents is that rebounding is lower impact that running or jogging.

Because the elastic element of the rebounder – the springs or bungee bands – absorb most of the impact, the shock is distributed more evenly through the joints and tissues of the body than with exercises like running. It would seem that injuries to the ankles, knees and feet are less common as a result.

The study also looked at heart rate and oxygen uptake. Here’s the excerpt highlighting the results:

“The results indicate that, for similar levels of HR (heart rate) and VO2 (oxygen uptake), the magnitude of the biomechanical stimuli is greater with jumping on a trampoline than with running, a finding that might help identify acceleration parameters needed for the design of remedial procedures to avert deconditioning in persons exposed to weightlessness.”1

This basically amounts to saying that in terms of heart rate and oxygen uptake, jumping on a trampoline offered a more efficient form of exercise than running on a treadmill. This has positive implications for its impact on cardiovascular and respiratory systems, both of which are worked heavily during aerobic exercise like running.

Like most forms of exercise, rebounding improves strength, muscular development (which is crucial for your bones), balance, and coordination. Rebounding engages your whole body, and moves your whole body through space.

Moreover, the verticality of the movement is thought to have a positive impact on the lymphatic system. One study showed that increased G-force enhances lymphocyte activity.2 However, this applies to all forms of exercise, as scientists have found that ”the lymphatic pump becomes very active during exercise, often increasing lymph flow 10 to 30 fold”.3

The lymph system is important for the functioning of the immune system and the transportation of immune cells throughout the body.

Why Does Rebounding Have These Effects?

It’s not surprising to suggest that rebounding gets the fluids in your body moving. The movement is one of continual acceleration and deceleration.

As the trampoline hurls you upward you speed up, then slow down as gravity pulls upon you. Then you change direction and accelerate at the rate of Earth’s gravitational pull until the surface of the rebounder catches you, decelerating you before again changing the direction your body is moving to toss you back upwards.

You naturally are also contributing your own energy into the system, as well as supporting your own body against the forces created by this acceleration and deceleration. The exertion this requires creates the bulk of the benefits.

Should I Start Or Continue Rebounding?

Unfortunately the studies available on rebounding are few and far between, and they tend to focus on comparing the practice only to running on a treadmill. Consequently, if you must choose between rebounding or treadmill, the data suggests that rebounding is a better choice.

Additionally, if rebounding is the only form of exercise you can get yourself to do, then I suggest you continue rebounding.

Aside from the lack of studies comparing rebounding to a variety of exercises, the cons of rebounding include the need to purchase special equipment as well as the space the trampoline occupies.

Another obvious argument against rebounding is its repetitious nature which may lead to exercising less frequently.

All these reasons make rebounding not the most ideal exercise option for your bones.

But the good news is that rebounding isn't your only option.

You don’t actually need any special equipment to get the exercise your body needs to build your bones and stay healthy.

It’s important that your workouts engage your body in a way that applies positive stress on your bones to stimulate growth, per Wolff’s Law. The technical term for these bone stimulating forces is osteogenic loading.

The Densercise™ Epidensity Training System was specifically developed to use the power of osteogenic loading as efficiently as possible. It also utilizes your body weight to create the force required, meaning that you don’t need any clunky or costly equipment. Additionally, the amount of time needed to see results is minimal – just 15 minutes per session, three times a week.

And because repetition isn't your friend when exercising, Densercise™ provides a variety of fun and easy exercises that build bone and help you stay in shape.

No matter what your means of getting active is, for stronger bones and fuller life it is imperative that you simply move your body, and make exercise a conscious part of your lifestyle.