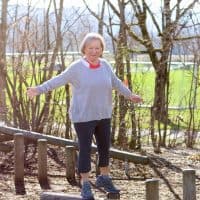 Swedish researchers have found simple physical tests that can be used for predicting fractures.

Their findings were so clear that they recommend these tests be included in basic physical examinations to help doctors assess bone health and fracture risk.

The same research revealed negative associations between selective serotonin reuptake inhibitors (SSRIs) and physical function– underlining the risks of SSRIs. SSRIs are a class of drugs commonly used to treat the symptoms of depression.

We'll review the data, and learn how these physical tests can help us assess our ability to avoid fractures.

In a doctoral thesis for the University of Gothenburg, researcher Berit Larsson found that the One Leg Standing Time (OLST) test was a powerful predictor of fracture risk.

Larsson's thesis analyzed data from The Sahlgrenska University Hospital Prospective Evaluation of Risk of Bone Fractures (SUPERB) study, a prospective population-based study of 3028 women between the ages of 75 and 80 years old. She compared participants' results on the One-Leg Standing Test to fracture incidence.1

The One-Leg Standing Test is as simple as it sounds. It requires the test-taker to stand on one leg for as long as they can. In fact, you can easily take this test yourself at home. Be sure you do it next to a wall, a sturdy chair, or something else stable to grab onto to prevent falling if you lose your balance.

The other test that Larsson's thesis considered was the Timed Up and Go (TUG), which times a participant as they rise from a seated position, walk three meters (9.8 feet), turn, and then sit down again.

Larsson found that participants who required more than 12 seconds to complete the TUG test were nearly three times as likely to break a bone than women who completed the test in under 12 seconds.1

Just like the One Leg Standing Time test, you can complete the Timed Up and Go test at home. Larsson found these tests to be such effective indicators of fracture risk that she recommended that they become standard inclusions in routine medical evaluations.

These tests are more accessible, more affordable, and more consistently dependable than DXA scans, which rely on specialized and costly medical equipment that has proven inconsistent. They also test a better predictor of fracture than DXA scans: physical function.

That's true for two reasons: first, because most fractures are caused by falls. Reduced bone quality, including loss of bone mineral density, can make a fracture more likely in the case of a fall– but the most direct way to prevent the fracture is to avoid the fall.

DXA scans are common because they justify the prescription of osteoporosis drugs. Big Pharma worked to make them ubiquitous. But osteoporosis drugs can cause awful side effects, automatically increase bone-damaging acidification, and don't help prevent falls.

The Timed Up and Go test timed participants as they rose from sitting, walked three meters, and sat again. Participants who could do so in less than 12 seconds were three times less likely to break a bone. TUG and OLST tests are effective at predicting fracture because they measure physical function. High physical function prevents falls, which cause the majority of fractures.

Larsson's thesis also found that treatment with SSRIs (selective serotonin reuptake inhibitors) was linked to lower physical functioning. The tested functions included grip strength, walking speed, and the number of times a participant could rise from sitting to standing.

This loss of physical function was not accompanied by a deterioration of bone micro-structure, according to assessments of participants' bone, generated through high-resolution peripheral quantitative computed tomography.

In people over 50, a study found that use of SSRIs doubled the risk of fragility fracture. That may be because serotonin plays a role in bone formation, so a serotonin blocker naturally interferes with the bone remodeling process.3

Another bone quality assessment included in Larsson's thesis turned up an unexpected and misleading association. A study of 803 women, found that statin users had lower cortical porosity and higher cortical bone density than nonusers. While this single factor seems to suggest that statins make bones stronger, a more holistic assessment of the effect of statins reveals the ways they can increase fracture risk.

For example, studies have found that statin users have a 34% higher risk of cataracts. Reduced vision increases the chance of accidents and falls that can cause fractures.4

Larrson found that Selective Serotonin Reuptake Inhibitors (SSRIs) were linked to lower physical functioning. This adds to the evidence that SSRIs increase fracture risk. While Larrson's report noted that statin users had harder-than-normal cortical bone, this did not outweigh the harmful effects of statin use, including increased risk of cataracts.

The One Leg Standing test and the Timed Up and Go test are valuable tools for effectively assessing fracture risk. If these tests aren't part of your doctor's evaluation, you can conduct them safely at home.

Regular physical exercise can improve your scores on these tests and reduce the associated risk of fracture. The Save Institute created Save Trainer to make it easy to get exactly the sort of physical activity that you need at whatever skill and intensity level you're ready for. Best of all, our professional trainers are available 24/7 in on-demand videos tailored to your fitness level and needs.

Keep increasing your strength and your knowledge– they'll carry you on the journey to stronger bones and a fracture-free future.

Get It Free Now
15 comments. Leave Yours Now →