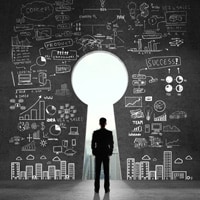 Albert Szent-Gyorgyi, the Nobel Prize-winning scientist who discovered Vitamin C, once said that “research is to see what everybody else has seen, and to think what nobody else has thought.”

I agree with Szent-Gyorgyi. On a fundamental level, the purpose of research is to view data in a new light. The process is progressive, as study builds upon study and “what everybody else has seen” becomes building blocks for new discoveries.

This is the approach I took when I created the Osteoporosis Reversal Program. Because the Program is a 100% natural approach to treating osteoporosis, it challenges the Medical Establishment’s drug-based protocol. In my research, I analyzed countless mainstream studies published in respected medical journals; but to discover the truth and create an effective, nutrition-based program for treating osteoporosis, I needed to “think what nobody else has thought.”

In other words, while researching for the Osteoporosis Reversal Program, it was essential for me to view the data clearly and not be blinded by the Medical Establishment’s agenda.

The Medical Establishment Has an Agenda?

Yes. Not only does it have an agenda, but the Medical Establishment effectively holds scientists hostage to its interests. With few exceptions, scientists are fearful of presenting research results that undercut Big Pharma’s profits. I’ll explain.

Protein Intake and Your Bones: An Inconclusive Conclusion

The Osteoporosis Reversal Program emphasizes pH-balanced nutrition for optimal bone health. Many studies ostensibly agree with this, but they “hide” behind tenuous language in their conclusions. For example, in a 2009 study,1 scientists clearly showed that reduced protein intake decreases acid and calcium levels in the urine. Notably, researchers also discovered that lower protein levels resulted in decreased estimates of bone resorption.

Yet the study concludes with the following caveat:

Why does Avery B. Ince, the head of the research team and lead author of the study, wish to hide behind this caveat? After all, Dr. Ince is an M.D. and PhD; his study was published in the prestigious Journal of Clinical Endocrinology & Metabolism; and his affiliates include the Endocrine Division (B.A.I., R.M.N.) and Mallinckrodt General Clinical Research Center (E.J.A.) at Massachusetts General Hospital in Boston. Shouldn’t he be confident in his data?

The reason Dr. Ince used such evasive language is simple: the true results show that a pH-balanced diet can protect against bone loss. That would mean admitting that drugs aren’t necessary, which would jeopardize Big Pharma’s profits and Dr. Ince’s reputation.

The Truth is Often Inconvenient…

…for the Medical Establishment, that is. More research, this time from the highly respectable Oslo Health Study and published in the prestigious Journal of Osteoporosis, also produced “inconvenient” results.

But they didn’t leave it at that:

“The present results on distal forearm BMD could be in favour of the view that frequent use of soft drinks and rare intake of fruits and vegetables might have a negative influence on the skeleton, but the mechanisms involved are not clarified.”2 (emphasis mine)

The lead scientists in the study, Arne Torbjørn Høstmark, Anne Johanne Søgaard, Kari Alvær, and Haakon E. Meyer share an impressive list of affiliates: the University of Oslo Section of Preventative Medicine and Epidemiology, and the Norwegian Institute of Public Health Division of Epidemiology. Yet they still felt the need for a caveat when publishing their research, because it pointed to a drug-free means of correcting low bone density.

Like Dr. Ince, the Oslo scientists feared the wrath of the Medical Establishment. After all, their careers and reputations were at stake.

What they don’t seem to realize is that your bone health – indeed, the bone health of millions of people – is at stake as well.

When I developed the Osteoporosis Reversal Program, I was not trying to appease the Establishment. Your overall health and the integrity of your bones were and are my primary concerns. When viewed in that light, the sources and studies I analyzed showed a clear nutrition-based path to bone health.

It’s interesting to note that the Oslo researchers used some of the same sources as I did when I wrote the Osteoporosis Reversal Program. As I noted earlier, studies build on each other and form the basis for rational, scientific conclusions. The work of researchers such as D.A. Bushinsky and K.L. Tucker are referred to both in the Oslo study and in the Osteoporosis Reversal Program.

In addition, the Oslo scientists and I looked at some of the same data, such as U.S. Barzel’s studies, “The skeleton as an ion exchange system: implications for the role of acid-base imbalance in the genesis of osteoporosis” published in the Journal of Bone and Mineral Research and “The effects of chronic acid and alkali administration on bone turnover in adult rats” published in Clinical Science. I reviewed the same resources as Høstmark and his colleagues, yet…

My Conclusions in the Osteoporosis Reversal Program are Entirely Different

That’s because I had and still have the courage to stand up to the Medical Establishment and bring you the truth. The data shows a definitive conclusion that nutrition has an effect on bone health, and that means YOU can have an effect on your bone health!

This is the last thing the Medical Establishment wants you to know. You see, Big Pharma and Mainstream Medicine are linked together in a money-motivated labyrinth that stifles real research and twists the truth in order to market and sell more drugs. They don’t want you to know that you can take control of your health and bone density without these dangerous medications.

The truth is, easy dietary and lifestyle changes will enable you to restore your bones, as many in our community have already done. It’s only a matter of time before the Medical Establishment “catches up” to the Osteoporosis Reversal Program. Because, as history has shown, it’s hard to suppress the truth for very long.

Aren’t you glad you’ve already found the truth about osteoporosis?