Stop Suffering From Seasonal Allergies! Eat These 12 Bone-Building Foods And Fight Your Allergies Without Drugs - Save Our Bones

Stop Suffering From Seasonal Allergies! Eat These 12 Bone-Building Foods And Fight Your Allergies Without Drugs 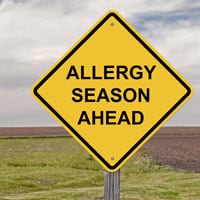 Seasonal allergies can be a major inconvenience, with reactions to plant pollen and other allergens ranging from a mild irritation in the nose and eyes to full-blown reactions that can include sinus infections and breathing difficulties.

When such symptoms arise, the usual course of action is to reach for an antihistamine, decongestant, or similar drug. Many allergy sufferers take these drugs even though they’d rather not, because the severity of symptoms leaves them thinking they have no choice.

Here’s the good news: you do have a choice! So I can’t wait to share these 12 amazing, bone-healthy foods with you that also help relieve and prevent allergic reactions.
I’d like to start with one of my favorite herbs that has a delightful scent and flavor…

With leaves like pine needles, rosemary’s delectable scent is reminiscent of evergreen trees. It’s a popular herb used in cooking, particularly to season meats like chicken, lamb, and beef. Its flavor comes in large part from rosmarinic acid, a potent anti-allergy, anti-inflammatory substance.

Rosmarinic acid (RA) has been shown to be effective at relieving symptoms of seasonal allergic rhinoconjunctivitis (SAR). In one study, participants experienced greatly reduced allergic response after ingesting RA, and topical application of RA reduced inflammation after just five hours.

According to the researchers, RA’s anti-allergy effects are “due to two independent mechanisms: inhibition of the inflammatory response and scavenging of ROS [reactive oxygen species].”1

The latter mechanism is one of the primary functions that make rosemary a bone-healthy food: it has powerful antioxidant activity that significantly reduces bone-damaging inflammation.

I absolutely love apples. They contain several Foundation Supplements and bone-healthy phytochemicals, including a significant amount of a flavonoid called quercetin, which has been shown to stave off allergic reactions by “blocking” the release of histamines. It does this by strengthening the cellular membranes of mast cells and basophils, which normally release histamines in response to allergens.

“Quercetin has shown a biphasic behavior in basophils at nanomolar doses and hence its action on cells involved in allergic inflammation.”2

And apples offer concentrated amounts of quercetin – one medium-sized apple contains about 50 milligrams.

It might surprise some Savers to see green tea on this list. But in moderation, green tea is good for bones due to its high antioxidant content. Green tea also contains allergy-relieving, bone-building catechins. Catechins relieve allergies by preventing the conversion of histidine to histamine in the body.

Rich in Vitamin C, the red fruit of the rose plant is full of proanthocyanidins, a class of antioxidant flavonols that inhibit histamine-producing enzymes. Vitamin C itself is also a natural antihistamine,3 and rosehips have plenty – 1 cup contains over 540 milligrams.

You can collect your own rosehips from old varieties of roses or wild roses (avoid any rose bushes that have been sprayed with pesticides or other chemicals). You can also purchase the dried, whole hips or buy ready-made rosehip tea.

Human use of this plant as both food and medicine goes back for thousands of years. Garlic boosts immunity significantly, but it does not exacerbate the immune response that occurs with allergies. That’s because garlic is able to inhibit enzymes that produce prostaglandins and thromboxanes, two highly inflammatory substances that are generated in an allergic response.

Fresh, raw garlic also contains a great deal of Vitamin C, but because garlic is generally consumed in small amounts, it’s a good idea not to depend on it as a main source of Vitamin C. There are plenty of other Vitamin C-rich foods that can be consumed during allergy season, such as our next food…

An excellent source of bone-building calcium, mustard greens also offer Vitamin C and beta-carotene. Mustard greens are anti-inflammatory, and their nutrients are helpful in breaking down excess histamine in the system.

They have a distinctive flavor that is mild yet pungent, and they’re available year-round in most grocery stores. Even organic options are relatively inexpensive. If you have some garden space or large containers, mustard greens are easy to grow yourself as well.

The humble mushroom may not be the first thing you think of when it comes to health foods, but this delicious fungus has many healthful nutrients, including selenium. Selenium enhances the immune response and has a specific effect on histamine.

“The results of the present study demonstrate beneficial effects of supplemental selenium in attenuating clinical manifestations of allergy and asthma.”4

Dandelions are still considered by many to be weeds, but as their healthful properties catch on, they are less likely to be eradicated from lawns and yards. One of the first “spring greens” to pop up, young dandelion greens are wonderful in salads and soups, and the older greens are good cooked as a potherb. You can even make the green leaves into a tea.

Nutrient-rich dandelion greens are full of beta-carotene, and they also contain Vitamins C and E. They’re an excellent source of inulin, a kind of fiber that feeds the good bacteria in your gut. This is important for the management of allergies, because some bacteria in the gut produce the histamine precursor, histidine. An imbalance can result in too much histamine and an “overreaction” to an allergen.

These tasty little seeds are an excellent source of bone-healthy copper and healthful, anti-inflammatory fats. In addition, sunflower seeds are rarely an allergen themselves, so those who have more common peanut or tree nut allergies often opt for sunflower seeds. Like mushrooms, sunflower seeds contain a significant amount of allergy-fighting selenium.

Arthritis sufferers may be familiar with this popular, natural, anti-inflammatory spice. Turmeric has been used since antiquity for various disorders, including inflammatory diseases. According to research, allergies are “a proinflammatory disease.”5 Anyone who has suffered from them will surely agree!

The substance in turmeric that is largely responsible for its allergy-relieving qualities is curcumin. Both human and animal studies have shown curcumin to be effective in “controlling allergic diseases through inhibiting the production of cytokines…”5

Interestingly enough, buckwheat is not wheat. It’s not even a grain, although it’s usually considered a grain and used as one. Buckwheat “kernels” are seeds of a plant that is related to rhubarb, and it rarely elicits an allergic response (unlike wheat). Alkalizing buckwheat contains rutin, an antioxidant made up of quercetin and rutinose. As discussed earlier, quercetin is an excellent allergy fighter.

These healthful little seeds are a good source of bone-healthy calcium, and full of anti-inflammatory, Omega-3 oil. Additionally, flax seeds contain selenium, an allergy-fighting substance we’ve seen in various foods above. Flax oil is a popular supplement and condiment, and it is very nutritious; but unlike the whole seeds, flax oil is acidifying, so bear that in mind as you prepare balanced, bone-smart meals to combat seasonal allergies.

As you’re looking over these foods, you might find yourself wondering how to incorporate them into your diet, especially if you want to nourish your bones. After all, eating a variety of foods is always important for optimal health, so these 12 foods are certainly not going to make up your entire diet for allergy season.

Instead, finding ways to include these foods in your meals and snacks each day is a healthier goal. For example, as you plan your meals for the week, you could include two of these foods a day, such as mustard greens as a side dish and sunflower seeds as a snack. Or you could have fun and challenge yourself to create a meal or dish with as many of these foods as possible – such as mustard and dandelion greens sautéed with mushrooms and garlic, and topped with sunflower seeds. Yet another option is to add one or more of these foods to a dish you already prepare and enjoy.

It’s fun to come up with creative ways to build your bone health and relieve allergies with foods. It can also be challenging, and it helps to have creative recipes to help you along. That’s one of the main roles of the Save Our Bones cookbook, Bone Appétit.

Bone Appétit includes over 200 recipes based on the Program’s Foundation Foods, and as you can see from the list above, many allergy-fighters are already included. Bone Appétit is more than just a recipe book, however. It includes tips and tricks and creative ideas to inspire you to expand your food repertoire. So when you see lists like this one, you’ll already have the right mindset to include new and interesting foods in your daily meals and snacks…or find new ways to prepare foods you’re already eating.

Bone Appétit’s digital format makes it easy to find what you want. Because Bone Appétit is a PDF file, you can easily search the entire cookbook for a single ingredient, term, or concept. And as you develop favorite recipes, you can print them out if you prefer.

Enjoy eating for your bones and respiratory health this allergy season!