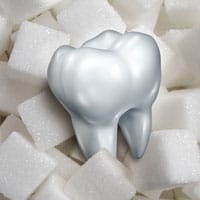 Did you realize that when we attempt to control our sugar cravings, most of us think in terms of self-denial? We keep thinking “I really shouldn’t eat so much cake,” or “I wish I could stop eating so many cookies”, sometimes to little or no avail.

But the Save Our Bones philosophy has always been about the positive benefits of foods, not trying to white-knuckle your way through cravings.

Today’s post shows you how you can apply this philosophy as we explore seven ordinary foods (most of which are Foundation Foods) that help you overcome sugar cravings. You’ll also learn about an activity that has been scientifically proven to effectively reduce the sugar-craving cycle.

But first, let’s briefly recap what’s so bad about sugar and what it has to do with bone health.

Sugar By Any Other Name…

It’s important to bear in mind that when I talk about sugar, I am referring to refined, white table sugar and/or its maligned cousin, high fructose corn syrup (HFCS). These simple carbs have no nutritional value whatsoever. They are unhealthy forms of sugar that, when consumed excessively, can cause widespread damage throughout your body.

These acidifying sweeteners are not the same as the complex carbs found naturally in fresh fruits and vegetables full of vital nutrients and fiber. So as we go forward, remember that “sugar” refers to sugary, processed junk foods and the like.

And remember, the occasional sweet treat is just fine. What we’re talking about it excessive consumption of sugary foods on a regular basis.

What Sugar Does To Your Bones And Overall Health

There is no body system that remains unaffected by sugar. Your kidneys, liver, pancreas, and your immune, digestive, endocrine, and cardiovascular systems are all influenced by the ingestion of sugar. It even affects your brain, and has been implicated in Alzheimer’s disease. This is largely due to sugar’s role in the formation of brain-damaging proteins called Advanced Glycation End products (AGEs).

In addition to being acidifying, sugar depletes your bones of minerals. It increases urinary output of magnesium and calcium, and prevents the absorption of bone-building copper.

Plus sugar competes with Vitamin C for absorption, because insulin transports both sugar and Vitamin C into cells. If there is too much sugar, the insulin will carry it across the cell membrane instead of the Vitamin C. This is one of the main ways that sugar attacks the immune system.

If Sugar Is So Bad For Me, Why Do I Crave It?

There are many reasons and theories as to why we crave sugar. Here are a few reasons why your body perceives the need for a sugar fix:

The following seven foods help stave off the desire for sugar by filling your body’s health needs and correcting the imbalances that can cause you to want sugar to begin with. Here’s a list of those foods and how they help tame the “sugar beast.”

In addition to including plenty of the above foods in your daily diet, there’s an easy yet powerful way to stave off sugar cravings, and it’s also essential for bone health: exercise.

A recent study evaluated 47 overweight people with an average age of 28. For three days prior to the study, participants refrained from eating any sugary snacks and drank only water. They also avoided exercise for two hours before their cravings were assessed.

Participants were divided into two groups, one of which walked briskly on a treadmill for 15 minutes and the other group sat still for the same amount of time. Then, study subjects in both groups sat quietly for five minutes before participating in a test that was designed to increase physiological arousal and stress levels.

At that point, all participants were given a piece of candy and told to unwrap it, but not eat it.

Throughout the process, their food cravings and stress levels were measured.

The results showed a clear distinction among the exercise group: they experienced greatly reduced cravings for sweets during and after the trial compared to the sedentary group.1

The results may have to do with the way exercise improves mood and boosts energy levels, both of which affect sugar cravings. In addition, exercise stimulates metabolic processes that “unlock” the body’s blood sugar, making it more available to the brain and reducing the brain’s perceived need for more sugar.

Psychologists who reviewed the above study, caution that eating healthful snacks is important for walking to have its intended effect on sugar cravings. So once again, what you do eat plays as important a role as what you avoid. And walking is just one form of exercise that staves off sugar cravings and builds bone.

All Exercise Is Beneficial

While walking is excellent exercise that’s good for your bones and overall health, targeted exercise that focuses on strengthening fracture-prone areas is also very important in the fight against osteoporosis.

All the benefits of exercise – from less sugar craving to healthier, stronger bones – can be enjoyed by practicing “Densercises” as well. It’s important to practice targeted exercises in order to build bone density, and the Densercise™ Epidensity Training System offers 52 moves that are specifically designed to build stronger bones, tone muscles, improve posture, and more.

So if you want to tackle your sugar cravings from all angles, Densercise™ can be one of your primary weapons alongside the seven key foods described above. And to help you even more, it includes the Densercise™ Eating Guide, which gives you the most healthful foods to eat before and after you Densercise™.

Do you have any tricks and tips for keeping sugar consumption down? Please share with the community by leaving a comment below.