Study Examines How A Western-Style Diet Impairs Learning, Memory, And Appetite Control - Save Our Bones 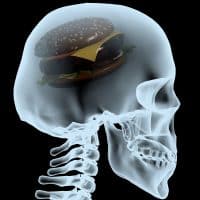 Your body uses the food you eat to replenish your strength, build your bones, repair your cells, and fuel your life. The connection between diet and health is well established, but new research is elucidating how diet also impacts the health of your brain.

When your brain function is at risk, so is your bone health. A depressed brain function can cause visual disturbances and decreased balance, both of which can increase the risk of potential falls and subsequent fractures.

Today we'll look at a study that examines the effect of the typical Western diet on brain function. You'll learn how excessive consumption of certain foods can have impacts that range from memory loss to appetite control — and in the process, you'll see how a pH-balanced diet supports your brain and body in equal measure.

The study's authors were particularly interested in the impact of a Western-style diet (WS-diet) on learning, memory, and appetite control. Each of these functions involves an area of the brain called the hippocampus.

The hippocampus is a section of the brain in the temporal lobe, below the cerebral cortex. It's roughly the shape and size of a seahorse, in fact, it's name is derived from the Greek word for seahorse for this reason.

The hippocampus is a complex and multi-faceted part of the brain, which performs the following main functions:

For the study, one-hundred and ten healthy adults who typically consumed a good quality diet were randomly assigned to either a Western-style diet (WS-diet) group or a control group that ate their habitual diet. For the span of one week, the participants in each group followed the corresponding diet, and the scientists performed tests to analyze the impact of those diets on each participant's hippocampal function.

The researchers measured hippocampal-dependent learning and memory (HDLM) and appetitive control before and after the week-long intervention and then retested the participants at a three-week follow-up.

The hippocampus is a part of the brain that regulates learning, memory, and appetite control. This study examined the impact of a high-sugar, high-saturated-fat, high sodium, Western-style diet on hippocampal function, as compared to a more healthy diet.

One particularly interesting feature of this study is the scientific re-creation of a Western-style diet. Since all of the participants usually ate a more balanced and healthy diet, they had to be instructed to ensure they reduced the quality of their diet enough to compare it to the typical Western diet.

Below are the instructions they were given:1

It's not hard to imagine that the participants would have a negative response to a sudden switch to a diet high in saturated fat, sugar, and sodium. Especially since those meals were taking the place of meals that would have provided important nutrients and lasting energy.

Note that the participants didn't forgo healthy meals entirely, they just exchanged one healthy meal with a junk food meal each day of the week.

To recreate a Western-style diet, the participants were instructed to eat one predetermined meal each week that was high in saturated fats, sugar, and sodium, and lacking in important nutrients.

Results Of The Study

Here are the results, as described by the researchers:

“Relative to controls, HDLM (hippocampal-dependent learning and memory) performance declined in the WS-diet group, but was not different at follow-up. Appetitive control also declined in the WS-diet group and this was strongly correlated with HDLM decline. These findings demonstrate that a WS-diet can rapidly impair appetitive control in humans—an effect that could promote overeating in consumers of a WS-diet. The study also suggests a functional role for the hippocampus in appetitive control and provides new evidence for the adverse neurocognitive effects of a WS-diet.”1

In simpler terms, just eight days of a typical Western-style diet– high in sugar, unhealthy fats, and empty calories– impairs brain function. It reduces the acuity of memory and the ability to learn, and it led to overeating. This pattern helps explain the rising rates of obesity in Western countries.

The group that ate a Western-style diet for a full week showed a reduction in hippocampal-dependent learning and memory (HDLM). Those participants also lost some of their appetitive control, and that decline correlated with the decline of HDLM.

The last, and perhaps most important finding of this study was that after three weeks of returning to a healthy diet, the effects of that one week of unhealthy eating were abating. The body and the brain have a remarkable ability to self-repair, provided we give them the right tools to do it.

The pH-balanced diet formulated in the Osteoporosis Reversal Program provides those tools, along with many others, to help you make choices that support your overall wellness with a focus on building healthier bones. As this study shows, you have the power to improve the state of your health, the level of your brain function, and the quality of your life.