The End Of Bisphosphonates? Bombshell Study Proves They're Ineffective - Save Our Bones 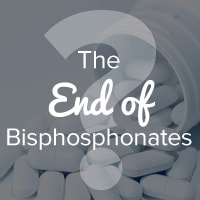 2015 may be the Establishment’s worst year yet regarding osteoporosis. A few days ago, a meta-analysis of no fewer than 33 studies was published in the prestigious BMJ (the former British Medical Journal). This study confirms what Savers have known all along: that bisphosphonates are totally ineffective at preventing fractures.

Bisphosphonates are a class of osteoporosis drugs such as Boniva (ibandronate), Fosamax (alendronate), Actonel (risedronate) and Reclast (zoledronic acid). Their mode of action is to disrupt normal bone remodeling, which is ultimately detrimental to bone integrity and fracture resistance.

Now that this study has been published decisively in a mainstream medical journal, it will be interesting to see how long it will take for the Establishment to take notice. Meanwhile, Savers can rejoice that they are, as always, ahead of the curve!

Today we take a closer look at this long overdue meta-analysis and what its implications are for the treatment of osteoporosis and osteopenia.

But first, I’d like to give you some very relevant information about…

Formerly known as the British Medical Journal, the BMJ is an international, peer-reviewed medical journal that has been in print since 1840. It was the first medical journal to have an online presence, launching bmj.org in 1995.

With an average weekly print circulation of 121,762 and a monthly peak of 1,365,786 for new online visitors, the BMJ is well on its way to realizing its vision, which is “to be the world’s most influential and widely read medical journal.”1

At the 2008 Medical Journalist Association’s awards in London, the BMJ was named Medical Publication of the Year.

There’s no doubt that the BMJ is a respected, mainstream, prestigious medical journal, which is what makes the published meta-analysis all the more remarkable.

The Study: A Closer Look

The meta-analysis is not only clear that bisphosphonates do nothing to prevent fractures. It also notes the fact that bisphosphonate therapy makes bones more susceptible to fracture, and goes so far as to accuse Big Pharma of aggressively (and deceptively) expanding the eligibility requirements to get more people on osteoporosis drugs.

In fact, the study points out that fractures are not necessarily (or even usually) the result of “fragile bones.” Instead…

Falls, Not Low Bone Density, Are The More Feasible Culprit In Hip Fractures

Quoting from the study:

“Estimating absolute fracture risk is intuitively attractive, focusing on actual fractures rather than proxies such as bone mineral density or relative risks of fracture. But it has a fundamental conceptual flaw: fewer than one in three hip fractures are attributable to bone fragility. Fractures are traumatic events induced by falls, mostly in frail older adults. …The question, ‘Do you have impaired balance?’ can predict about 40% of all hip fractures, whereas osteoporosis predicts less than 30%. Ageing does result in bone fragility, but without a fall even fragile hips do not fracture.”2

This should sound familiar to Savers, because Chapter 2 of the Osteoporosis Reversal Program cites an article published in the Journal of Clinical Endocrinology & Metabolism which came to a similarly startling conclusion.

As quoted in the Program, the JCEM article concludes that:

“… after 5 years of follow-up, the majority of hip fracture cases were without hip osteoporosis regardless of age,”3

The BMJ study points out that fractures are “induced by falls” and have more to do with impaired balance than bone fragility.

Yet Mainstream Medicine insists on targeting bone density with drugs, “treating” everyone who’s diagnosed with osteoporosis or osteopenia by prescribing drugs that bring billions of dollars to Big Pharma.

Despite the very real side effects and dangers involved in taking bisphosphonates (more on that later), the Establishment has quite recently expanded the criteria by which osteoporosis can be diagnosed, medicating even more people unnecessarily.

The BMJ article puts actual numbers to this crude approach:

“Our meta-analysis indicates that 175 postmenopausal women with bone fragility must be treated for about three years to prevent one hip fracture.”2 (emphasis added)

Amazing! It’s tragic to think how many people have been taking bisphosphonates as part of this “medicate everyone” approach, risking dangerous side effects while actually harming their bones and body.

Side Effects Are No Light Matter

The just-published BMJ study correctly points out that:

“Oral bisphosphonates are associated with gastrointestinal problems (typically nausea, indigestion, heartburn, vomiting, and retrosternal pain) leading up to 20% of patients to discontinue treatment. They are also associated with atypical femoral fractures and osteonecrosis of the jaw.”2

In addition, bisphosphonates have an extremely inflammatory effect on the body, and can also raise the risk of esophageal cancer, cause vision problems, and even bring on atrial fibrillation.

It’s disgraceful that such life-altering, debilitating side effects are not even taken into consideration when doctors dole out osteoporosis drugs like candy. In fact, if you expressed concern over side effects to your doctor, you were likely dismissed.

So while safe, drug-free, effective options exist, like the Osteoporosis Reversal Program…

Here’s what the study researchers have to say about this very important topic:

“The focus on drug treatment means that widely feasible non-pharmacological interventions are overlooked. A recent meta-analysis of various fall prevention programmes estimated an overall relative reduction of fracture risk of 60% (95% confidence interval 34% to 78%) with exercise training. The benefit of physical activity on hip fractures not only shows a dose-response relation but is also comparable with that of drugs tested in idealised situations with highly selected participants.”2 (emphasis added)

Non-pharmaceutical approaches are often regarded as “alternative” and “fringe” by the Establishment, but more and more mainstream researchers are unable to deny the evidence: drug-free options in the form of exercise and nutritional therapy are incredibly effective.

Regular exercise, especially targeted moves designed to build bone density in fracture-prone areas, has been shown to be comparable to drug therapy. And as Savers know, adopting a bone-rejuvenating lifestyle is ultimately more effective than any drug, because it truly heals and builds bone; it doesn’t artificially mask a symptom.

In addition, a bone-healthy lifestyle has many attenuating benefits besides healthier, stronger, fracture-resistant bones and better balance to prevent falls. You also reap the “side effects” of improved overall health, more energy, and a happier outlook. A nutritional and exercise-based approach, like the Osteoporosis Reversal Program, offers a positive effect on the health and well-being of its participants. No drug can even come close to offering that!

The Fact Is, The Current Mainstream Approach Just Isn’t Working

The BMJ analysis concludes on a foreboding note:

“The dominant approach to hip fracture prevention is neither viable as a public health strategy nor cost effective. Pharmacotherapy can achieve at best a marginal reduction in hip fractures at the cost of unnecessary psychological harms, serious medical adverse events, and forgone opportunities to have greater impacts on the health of older people. As such, it is an intellectual fallacy we will live to regret.”2

Savers don’t need to worry about living with regret. From the get-go, the Program acknowledged the dangers of bisphosphonates and the “intellectual fallacy” of pharmacotherapy.

In Chapter 4, for instance, the Program goes into detail about the exact nature of bisphosphonates’ mechanism of action in the body. Here’s a quote that pretty much sums it all up:

“[…] the bisphosphonates attach themselves to the bone matrix, altering its normal function by affecting the replacement of old bone with new bone. Indeed, bone loss will be reduced; but at what price? A very high price, because what the makers of these prescription drugs don’t mention is that…inhibiting bone loss also inhibits new bone formation. Bones remain thick, but old bone is more prone to fractures than less dense yet more flexible newer bone. Not surprisingly, researchers have found that these medicines can make the bones more brittle, actually increasing the risk of fractures.” 4

The concept of bone quality and integrity, a key point in the Osteoporosis Reversal Program is becoming a subject of greater focus in the mainstream.

As Savers know, bone density is just one aspect of bone health. It is simply one factor in an overall journey to fracture-resistant, high-quality, youthful bones, which is explained in great detail in the Program. Simply put, healthy bone turnover – the body’s mechanism of removing old, worn-out bone and replacing it with new, healthy bone – is essential for strong bones, and bisphosphonates disrupt normal bone turnover. This artificially induces some “density” that may look good on a scan, but is actually destroys bone quality.

The Truth Is Out, But Will Doctors Pay Attention?

It will be interesting to see if doctors will take notice of this meta-analysis, especially since it’s been published in a mainstream journal. I doubt that the majority of doctors will get up to speed on this just released information.

I wish I could be more optimistic about this, but most doctors are simply not on the cutting edge. For one thing, they are often over-worked and very busy. For another, new information often “offends” their long-held beliefs, and re-structuring their practice in accordance with new research can be impractical and burdensome.

It saddens me to think of all the unsuspecting “patients” who will be diagnosed with osteoporosis or osteopenia and will walk out of their doctors’ offices with a prescription for bisphosphonates. Remember, 175 people have to take osteoporosis drugs for three years in the hopes of preventing one fracture!

This is yet more prove that the Osteoporosis Reversal Program has always been ahead of the curve. Much to their joy, many individuals have experienced better bone health on the Program over the years.

Yes, there is a way to reverse bone loss and prevent fractures without dangerous and expensive drugs. And I predict that one day in the not-so-distant future, toxic and dangerous osteoporosis drugs will be a thing of the past.

Have you taken bisphosphonates and experienced side effects? Please share your story with us by leaving a comment below.