The Paleo Diet: Good Or Bad For Bone Health? - Save Our Bones

The Paleo Diet: Good Or Bad For Bone Health? 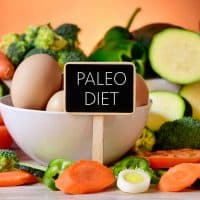 The Paleo diet is designed to emulate the way humans ate during the Paleolithic era. You may know it by other names, such as the Paleolithic diet, the caveman diet, or the steak and bacon diet.

Proponents of this diet claim that it is modeled on the diets of humans before the development of agriculture. They argue that our ability to grow our own food and mill grains led to humanity's now-widespread chronic illnesses.

Today, we'll look at the details of the Paleo diet and the history it is based on. You'll learn about its potential health benefits and significant detriments. Then we'll compare it to the pH-balanced diet recommended by the Save Institute.

The Paleo diet is named after the Paleolithic era, which ran from 2.5 million to 10,000 years ago, and predates the development of agriculture. For those millennia, humans survived through hunting and gathering.

Proponents of the diet claim that the human body didn't evolve the ability to properly digest and use foods that require farming, milling, and other processes that developed later in human history. Although we don't have complete knowledge about these early humans, they contend that modern diseases arose because of humanity's changing diet.

The idea that our bodies aren't well suited to an agricultural diet is called the discordance hypothesis. Although this argument is about avoiding chronic illnesses, most people follow a Paleo diet in an attempt to lose or maintain weight.

The Paleo diet is named after the Paleolithic era. It is based on the idea of what humans ate back then before agriculture introduced new foods and processes to our diet. Adherents believe that eating farmed foods or milled grains hurts our health.

A Paleo diet consists mainly of the following foods:

The following are foods restricted in the paleo diet:

There are elements in the Paleo diet that you likely recognize from several health-oriented diets. The emphasis on fruits, vegetables, nuts, and seeds, is a great way to get a wide variety of vitamins, minerals, and polyphenols. Additionally, cutting out refined sugar, added salt, processed foods, and dairy products is an excellent way to improve the quality of your diet.

Those select elements of the diet are smart goals, and it's no surprise that they contribute to weight loss. However, the rest of the paleo diet is questionable at best. The primary problems are the emphasis on excessive meat consumption and the lack of complex carbohydrates.

Aside from being highly acidifying, a meat-heavy diet causes inflammation, which leads to a range of undesirable health conditions, including cancer, heart disease, and bone loss.1 No less important is that large quantities of animal protein can hurt kidney function. Simultaneously, cutting out complex carbohydrates like those found in legumes and grains removes excellent sources of energy that don't spike your blood sugar. They also provide fiber, B Vitamins, and a variety of bone-healthy minerals.

One study found that people who replace healthy carbohydrates with animal protein died younger than those who reduced simple carbs like sugar and increased vegetables and complex carbs like whole-grain bread.2

In essence, the Paleo diet is unhealthy and potentially dangerous.

The Paleo diet restricts some unhealthy foods, such as sugar, salt, and dairy. However, it also emphasizes eating meat and cutting out complex carbohydrates. Consuming excess animal products has been found to cause heart and kidney disease, cancer, and bone loss.

The Paleo diet is modeled based on the concept that ancient humans didn't have grains and consumed large quantities of meat. However, the study of human history is increasingly revealing these ideas to be fundamentally false.

Historians believe that early humans didn't eat meat that often– but instead, relied on plant foods. Notably, scientists have discovered that Paleolithic humans even ground and prepared wild grains into soups, porridges, and breads.3

Additionally, the idea that human bodies evolved to eat large quantities of meat is unfounded. Quite to the contrary, our digestive system is versatile and generalized– capable of breaking down a wide variety of foods into their useful component parts.

Therefore the idea that the Paleo diet is consistent with our ancestors’ diet in the Paleolithic era is flawed.

The Paleo diet is based on the idea that Paleolithic humans didn't eat grains but did eat lots of meat. This is fundamentally incorrect. Our bodies do not show any signs of evolving to eat large quantities of meat. Early humans were largely vegetarians and in fact, did grind and eat grains.

Several aspects of the Paleo diet are beneficial for bone health and overall health. Just like the Osteoporosis Reversal Program (ORP), the Paleo diet recommends omitting dairy, processed foods, refined sugars, oils, and excessive sodium from the diet. However, the Save Institute does not recommend the Paleo diet, since it encourages the unchecked consumption of acidifying foods.

The pH-balanced diet we recommend offers the same benefits that the Paleo diet has, but none of the dangerous faults. For example, the ORP encourages the consumption of complex carbs, which contain essential nutrients. The ORP's pH-balanced diet includes potatoes, whole grains, beans, lentils, and other legumes balanced with alkalizing foods to prevent serum acidification.

The Paleo diet is harmful to bone health, primarily due to the acidification caused by consuming excessive amounts of animal products.

The creators of the Paleo diet got the history and the nutrition wrong. However, what they got right is that the contemporary Western diet makes us less healthy. Part of that is due to increased consumption of meat, along with processed foods, sugar, and excess salt.

The plant-based diets of our ancestors consumed wouldn't have contained processed foods made with refined sugar at all. And the salts in their diet would have been the alkalizing potassium salts found in plants, not acidifying table salt (NaCl).4 This difference is one part of the ancient human diet worth replicating! That's why the ORP recommends reducing sugar and sodium intake as part of a pH-balanced diet.

Reducing acidification and the inflammation that comes along with it is not only good for your bones, but it’s also good for your overall health.

The Paleo diet is acidifying as a result of its focus on excessive meat consumption. Animal products are acidifying, and lead to bone loss. Ancient diets didn't contain refined sugars or high sodium levels. They focused on plant foods, making them more pH-balanced (and bone-healthy) than the acidifying diet common in the Western world.

The Paleo diet is not safe for your bones. However, there are many pH-balanced Paleo recipes that emphasize vegetables, fruits, nuts, seeds, and healthy oils!

You don't need to eat like a cave-person to stay healthy. You need to eat like a well-informed, contemporary human. The Save Institute created a pH-balanced cookbook and meal planner to help you do just that. Use Bone Appétit to craft delicious meals that include the full range of healthy ingredients and techniques available to modern humans. It isn't based on restricting your diet to certain foods or food groups.

Eat Your Way to Stronger Bones.

In addition to keeping you healthier on a nutritional level, this greater variety of foods also allows you to enjoy your meals. You don't have to deprive yourself of thousands of years of human development and culture to stay healthy. Live (and eat) in the present!