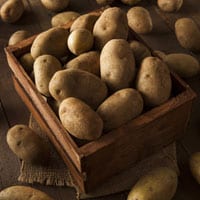 Groundhog Day, a traditional holiday that dates back to the end of the 19th century, is celebrated today in the United States and Canada. According to folklore, if the groundhog sees his shadow when emerging from its burrow, it’s a sign that bad winter weather is in store for six more weeks. If the groundhog fails to cast a shadow, then spring is “just around the corner.”

Of course, this is all in fun, and no one really relies on their local groundhog for weather prognostications. But this holiday does signify how tiresome winter can get, and how everyone is eagerly waiting for signs of spring.

Nonetheless, February 2 is the middle of winter in the Northern Hemisphere, and it’s often one of the coldest times of the year. That’s when warm, filling comfort foods really hit the spot.

In today’s post, we’re going to serve up three delicious recipes for one of the most popular comfort foods around: potatoes.

A Brief History Of The Potato

Most people think of Ireland when considering the origins of the potato. It’s true that in 1589, Sir Walter Raleigh introduced the potato to Ireland, near Cork. But Sir Raleigh was able to procure these first Irish potatoes because the Spanish Conquistadors had brought them to Europe from Peru in 1536.

It took nearly 40 years for the rest of Europe to catch on to this subterranean vegetable, but eventually, its ease of cultivation, nutritional value, and prolific production (nearly 10 people could be fed from a single acre of potato plants) won out, and the potato caught on with agriculturalists in the early 1600s.

It caught on so much, in fact, that it became a staple crop in Ireland, and when the potato blight hit in 1840, it was devastating to the Irish people, many of whom emigrated from their homeland to escape starvation.

Prior to that, however, the potato found its way to the U.S. in 1621, when the governor of Bermuda sent large wooden chests filled with vegetables, including potatoes, to Governor Wyatt of Jamestown, Virginia.

The first permanent potato patches in the United States were planted in the state of New Hampshire in 1719, with Idaho being a surprising latecomer to the potato scene. Now known for its russets, Idaho did not become a top producer of potatoes until 1872, when the Russet Burbank was developed.

Just What Are You Eating When You Eat A Potato?

The green tops of potato plants are inedible, like the stems and leaves of its nightshade relative, the tomato. But the tubers, as long as they have not been exposed to sunlight long enough to turn green, are delicious and nutritious, as we’ll soon see. But first, I want to clarify that the potato is not, strictly speaking, a root, although it is often called a root vegetable.

White potatoes are tubers, which are starchy “storehouses” that can propagate new plants. The tubers are formed as part of the root system, and they contain quite a few nutrients.

We’ll explore their nutritional profile in a moment, but first I would like to discuss if…

The skin raises its pH, essentially, making it an alkaline food when the skin is left on, and it also adds a great deal of nutritional value to this delicious tuber.

Because they are so often transformed into fare like French fries and chips, potatoes have a reputation for being fattening and unhealthy. But skin-on white potatoes have much to offer Savers in bone-building nutrients.

For the potato skins:

As you can see, potatoes are a very versatile and delicious food!

You’ll discover an amazing array of versatile foods in Bone Appétit, the companion cookbook to the Osteoporosis Reversal Program. With over 200 bone-nourishing recipes for breakfast, lunch, dinner, and dessert, you’ll never run out of ideas for bone-smart eating.

Many recipes in Bone Appétit feature common foods in a new light, such as chickpeas as a base for a Chickpea “Tuna” Salad (page 38), or a Breakfast Risotto (page 18) featuring quinoa. How about cauliflower for breakfast in Faux Hash Browns (page 17), or Non-Dairy Chocolate Delish (page 129) as a dairy-free, bone-smart alternative to chocolate ice cream?

With Bone Appétit, you’ll be astonished by the many bone-smart, creative dishes that build and renew your bones!