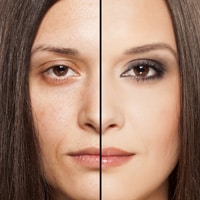 Could certain foods that damage your bones also make you look older and tired? The answer is yes – and research confirms it.

The good news is that by cutting down on these five bone-damaging foods, you’ll notice that dark circles or bags under your eyes, dull-looking skin, and wrinkles that make you look older become less prominent or even disappear.

Today, you’ll discover the beauty and bone health connection as we explore this fascinating topic.

It’s All About Balance

First, I’d like to clarify that you don’t have to completely eliminate these acidifying foods from your diet. It’s all about moderation! If you’re following the Osteoporosis Reversal Program, you already know that acidifying foods can be included, but in a smaller proportion to alkalizing foods.

Foods That Add Years To Your Appearance And Weaken Your Bones

1. Sugar and simple carbohydrates (including refined grains) are popular midday pick-me-ups, but ultimately these foods make you look exhausted. Here’s why: sugar harms collagen, a key component in youthful, healthy skin. Collagen also makes up part of the bone matrix that gives your skeleton a strong, flexible framework.

2. Drinking too much alcohol is another culprit in causing an aged look, and it it also detrimental to your bones. It does this in several ways.

First, alcohol dries out your skin because of its diuretic effect. It suppresses your body’s ADH, or anti-diuretic hormone, and your kidneys then kick in to remove excess water from your body. This dehydration affects all your organs, including the largest one in your body: your skin. Dry, dehydrated skin is more prone to wrinkles and dullness.

And let’s not forget that dehydration negatively affects your bones, too. Not only do your bones need water in order for healthy remodeling to take place, but when you’re in a dehydrated state, your body produces stress hormones that actually accelerate bone loss.

Next, excessive alcohol consumption exacerbates rosacea and causes red spots by dilating capillaries in your face. These swollen capillaries may even burst, creating permanent discoloration.

Liver damage is a relatively well-known effect of alcohol consumption. When you drink too much alcohol, it produces a substance called acetaldehyde, which is responsible for damage to the mitochondria in human cells. Liver cells are especially susceptible to this type of damage.
Without a properly functioning liver, the skin can look yellow and sickly.

Given that detoxification is vital to bone health and your liver is your primary detoxification organ, it’s especially important o keep alcohol consumption to a minimum.

Not All Alcohol Is The Same

It’s worth pointing out that beer and wine actually have some health benefits. For example, beer is high in the bone-building mineral silicon, and resveratrol, found in red wine, helps decrease inflammation, protect neural cells from damage, and actually improves balance (unless you drink too much!).   While the occasional glass of beer or wine is not going to harm your bones or make you look older and tired, I do not recommend relying on any form of alcohol as a major source of silicon or resveratrol. Silicon is found in many delicious, alkalizing Foundation Foods like cucumbers, bell peppers, onions, cherries, carrots, beets, and many others. And red grapes, blueberries, peanuts, bilberries, and cranberries are rich sources of resveratrol.

In fact, research shows that resveratrol is best absorbed from foods – the resveratrol found in red wine is minimally bioavailable, so you’d have to drink a great deal to obtain enough of this compound to make a difference in your bone health. And that completely defeats the purpose!

Speaking of balance, a rather obvious way that alcohol can damage your bones is by affecting your balance and coordination, leaving you susceptible to bone-breaking falls.

3. Trans fats are formed when liquid (or liquefied) fats are infused with hydrogen atoms in a process known as hydrogenation. This converts the healthful fatty acids into trans fatty acids, and you’ll see them listed as “hydrogenated” or “partially hydrogenated” oils in ingredient lists.

Unhealthy fats harm your skin by forming DNA-damaging free radicals which speed up the aging process, promote the formation of wrinkles, and decrease elasticity.

Your skin’s natural oil, or sebum, is composed of saturated and mono-unsaturated fats. Sebum’s fatty acid profile is nothing like trans fats, so when you eat unhealthy fats, your skin is missing the building blocks for its natural oil. The result? Dry, dull, wrinkled skin that can make you look older than your age.

Additionally, trans fats cause inflammation. Chronic inflammation harms bones by reducing bone density to the point that osteoporosis can result.

Instead, use bone-healthy, inflammation-reducing oils such as olive oil. If you use olive oil for cooking, it will not form trans fats when heated; but it will lose some of its nutritional value and undergo other undesirable changes if it’s heated past its smoke point.

The preservatives commonly found in processed meats are sodium nitrite and sodium nitrate. (The difference between the two is an oxygen molecule – sodium nitrite’s chemical formula is NaNO2; sodium nitrate’s is NaNO3.) The two are used interchangeably in preserving meat.

Additionally, the Linus Pauling Institute points to nitrates as the culprit behind increased rates of leukemia and tumors in the brain, nose, and throat. These harmful preservatives obviously increase the toxic load and create a highly acidic environment in the body. Honestly, if you often eat foods that contain nitrites, looking older and tired should be the least of your concerns!

5. Salt has been much maligned and misunderstood in recent years. In fact, the problem is multi-pronged: too much table salt is highly acidifying. The typical Western diet is high in sodium and low in potassium. It’s this skewed ratio that causes calcium loss via the urine, obviously weakening your bones.

Excessive salt consumption, especially in the absence of adequate potassium levels, dehydrates your body and skin, giving your face a dry, tired look. Plus eventually, a protective mechanism kicks in: your body retains water, which in turn makes your face (and body!) bloat.

As mentioned above, besides using salt in moderation, it’s important to balance the sodium/potassium ratio in order to avoid the calcium-depleting effect of sodium. Good levels of potassium can be found in Foundation Foods such as bananas, sweet potatoes, lima beans, plain yogurt, and winter squash.

As explained in the Osteoporosis Reversal Program, stay away from table salt as much as possible, since it’s composed of calcium chloride which is bleached and processed with man-made, chemical anti-caking agents. Some table salt even contains dextrose.

In contrast, sun-dried sea salt is naturally rich in potassium and other alkalizing minerals like calcium, potassium, sulfur, magnesium, iron, phosphorus, manganese, copper, iodine and zinc. Many of these are actually Foundation Supplements that help build bone. Still, use it in moderation.

Now You Know: There Is A Beauty And Bone Health Connection!

When you follow the pH balanced diet of the Osteoporosis Reversal Program you’re doing more than just building and nourishing your bones. You’ll also look better and younger because your skin will have a smooth and youthful glow. Don’t be surprised if people ask to know your secret!