Top 6 Foods That Balance Your Blood Sugar And Protect Your Bones - https://saveourbones.com 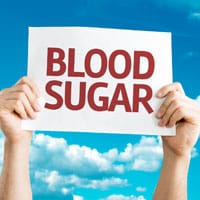 Stable blood sugar is an important yet often ignored aspect of bone health. Spikes and crashes in blood glucose levels can harm bones in various ways, such as inducing cravings for sugary foods and, due to a metabolic process called the Maillard reaction, actually destroying collagen.

Instead of a list of sugary foods to avoid, I’m excited to share with you today six delicious foods (most of which are Foundation Foods) that help keep blood sugar stable and nourish your bones with rejuvenating nutrients at the same time.

Blood sugar actually has a lot to do with bone health, so we’ll start with a brief explanation on…

While AGEs are excreted via the kidneys and an insulin-dependent process, excessive amounts may not be efficiently cleared and therefore remain in the body. They are irreversible molecules (meaning that they can’t be converted into another less deleterious substance) that damage collagen, which is the primary substance that makes up bone (bone is composed of 65% mineralized collagen and 35% collagen matrix).

And last but not least, fluctuating blood sugar levels stimulate cravings for sugary, carbohydrate-rich foods, setting the stage for an over-indulgence in sugar, thus continuing the bone-damaging cycle.

So let’s take a look at some delicious foods that actually help keep blood sugar levels steady and may even lower blood sugar.

This is one of my favorite spices. It pairs so well with autumn foods like pumpkin, apple, and squash. It not only tastes wonderful; cinnamon has also been shown to regulate blood sugar in Type II diabetics.

The reason is likely the way cinnamon seems to increase the response to insulin in the muscles and liver. The more sensitive your body is to insulin (the opposite of insulin resistance), the more stable your blood sugar.

These acidifying (but nutritious) little berries contain a constituent that increases insulin sensitivity, thus staving off the development of Type II diabetes. A 2009 study published in the Journal of Nutrition showed distinct metabolic benefits in mice that consumed blueberry powder in their feed.

Blueberries’ high antioxidant and anti-inflammatory action is apparently behind this – scientists observed a significant increase in the upregulation of inflammatory genes (such as tumor necrosis factor-alpha and interleukin-6) in the tissues of mice that consumed the blueberry powder.2

The research also showed that the mice were protected against insulin resistance and high blood sugar, leading scientists to conclude that:

This is great news for blueberry lovers! Because of their acidifying nature, blueberries make excellent toppings for alkalizing foods like plain yogurt, or mixed in with an alkalizing fruit mixture.

It’s interesting that such a sweet, delicious fruit as mangoes could stabilize blood sugar. According to research, mangoes reduce blood glucose in obese individuals. Participants were given 10 grams daily of freeze-dried mango (which equates to approximately half of a fresh mango), and after 12 weeks, a marked decrease in blood glucose was found in all participants (although slightly more for males).3

Mangoes contain a powerful antioxidant called mangiferin as well as fiber, which accounts in part for their marked effect on blood glucose.

Remarkably, when olive oil was supplemented as part of a Mediterranean-style meal, blood sugar was lower than in those who ate a similar meal without olive oil. In addition, when corn oil supplementation was compared to olive oil, researchers found much less post-meal blood sugar increase in the olive oil group.4

Further research shows that olive oil can actually prevent diabetes when added to a Mediterranean diet.

“A Mediterranean diet enriched with EVOO but without energy restrictions reduced diabetes risk among persons with high cardiovascular risk.”5

The wonderful thing about olive oil is it’s so easy to add to your meal. Drizzle it over vegetables, toss it into your salad, dip bread into it, or top your favorite soup with a spoonful of olive oil.

Now there’s another reason to love these juicy red fruits. In addition to the many bone-smart nutrients cherries have to offer, they also contain powerful antioxidants called anthocyanins. Researchers at Michigan State University found that cherries had a “significant impact on insulin levels” in animal and in vitro studies. In fact, anthocyanins actually increased insulin production by 50 percent in animal pancreatic cells.6

All varieties of cherry have similar health properties, so it’s not difficult to add this delightful fruit to your salads, desserts, or simply eat it raw as a snack.

These rich, creamy fruits contribute to feelings of satiety when eaten during a meal, research shows. Remarkably, study participants found the feelings of satiety lasted three hours after a meal that included half an avocado, and “…the inclusion of avocado to a lunch meal yielded a significant reduction in blood insulin levels over a 3 hour postprandial period.”7

Half an avocado, sliced and added to your salad and drizzled with olive oil-based salad dressing, would be an excellent addition to your lunch. There are other ways to prepare these and other bone-smart foods.

It’s fun to get creative with delicious bone-healthy foods! Just looking at the above list, you can try tossing together cubed mango, fresh blueberries, and chopped fresh cherries for a sugar-stabilizing dessert. Or drizzle olive oil over steamed vegetables or enjoy it in hummus.

You see, eating for your bones is not about deprivation. It’s about embracing the colorful, delicious variety of Foundation Foods presented in the Osteoporosis Reversal Program.

The Save Our Bones recipe book, Bone Appétit, was developed with the idea that getting creative with bone-smart foods is not only possible – it’s also easy. You’ll be amazed at the variety in the more than 200 bone healthy recipes, and at their simplicity.

A pH-balanced diet doesn’t have to be boring, and with Bone Appétit by your side, you’ll enjoy delicious and healthy dishes for your bones and your health!