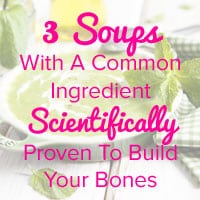 There’s nothing quite like a steaming bowl of hot soup when the weather gets cold.

But soup does much more than just warm you up. It’s the perfect way to pack lots of delicious, bone-rejuvenating Foundation Foods into one dish.

As you’ll see in the three scrumptious recipes I share today, the right ingredients can make a simple bowl of soup into a bone-nourishing meal. The “right ingredients” include a surprising food that you may associate more with salad than soup; but the research shows that it actually increases bone density…

Remarkably, study after study has shown that extra virgin olive oil (EVOO) is excellent for bone health. It’s been scientifically proven to increase bone density and much more.

The researchers discovered that,

There was an almost equal increase in alkaline phosphatase and serum interleukin-6 in both Group 3 and Group 4,

“…which suggested that olive oil and estrogen probably had the same effect on osteogenesis.” 1

“…in the control group, with no olive oil taken, BMD obviously decreased and t-score categories showed low bone mass compared with the experimental group…This confirmed that olive oil would be a good substitute for estrogen as a bone loss treatment.” 1

Part of olive oil’s secret lies in plant chemicals called phenols that are present in the olive fruit itself.

There is ample evidence showing that a Mediterranean diet greatly decreases the risk of developing osteoporosis and sustaining fractures. To investigate the evidence, researchers conducted a large cohort study consisting of 188,795 participants across eight European countries.

Mean age of the participants was 48.6 years, and their bone health was followed for a period of nine years. Eight hundred and two fractures occurred, and when results were evaluated, the Mediterranean diet was shown to decrease hip fracture incidence by seven percent.

Further, the study’s conclusion notes that:

Remember, meat is not off-limits on the Osteoporosis Reversal Program; but “a high meat intake” is discouraged, and scientific studies like this one further confirm this approach.

Another study focused on levels of osteocalcin and procollagen 1 N-Terminal propeptide (P1NP), both bone-formation markers, in elderly men divided into three groups.

Over a period of two years, the three groups ate a Mediterranean diet, but one group’s diet included 50 milliliters of virgin olive oil (about 3 tablespoons), whereas the second group included 30 grams of mixed nuts and the third group ate a low-fat Mediterranean diet.

The group that consumed the extra virgin olive oil had a “robust increase” in osteocalcin concentration and in P1NP, but no such increase was observed in the low-fat Mediterranean diet group or in the group that ate the mixed nuts.3

As the above data was investigated further, scientists began to uncover the mechanism behind olive oil’s bone-healthy reputation. In a comprehensive report, researchers reviewed a decade’s worth of data on olive oil and osteoporosis.

“Published evidence suggests that olive oil phenols can be beneficial by preventing the loss of bone mass.” 4

The reason, the report goes on to say, is that phenols:

“…can modulate the proliferative capacity and cell maturation of osteoblasts by increasing alkaline phosphatase activity and depositing calcium ions in the extracellular matrix.” 4

In other words, olive oil’s phenols work by helping to deposit calcium within bone.

The polyhenols found in olive oil – that is, antioxidant plant compounds made up of phenols – have also been shown to have remarkable bone-healthy effects. Specifically, a polyphenol called oleuropein has been scientifically proven to positively affect the synthesis of osteoblasts.

The scientists looked closely at these processes in human mesenchymal stem cells from bone marrow. These stem cells can develop into a variety of human cells, depending on gene expression. The research team discovered something fascinating: oleuropein actually inhibited the formation of adipocytes from stem cells (adipocytes specialize in storing energy as fat in the body), and enhanced the formation of osteoblasts.

Even more notable is the conclusion:

Olive Oil Is Good For More Than Just Bone Health

Virgin olive oil is also processed mechanically, but it is slightly lower quality and has a higher percentage of oleic acid.

EVOO is considered the highest-quality, most antioxidant-rich, vitamin- and mineral-packed oil available.

Given all the great benefits, you are probably eager to find out more ways to incorporate EVOO in your diet. The best way to get the full benefits of EVOO is at room temperature, since prolonged heat reduces its bioactive components. So it’s a great idea to use it in salad dressings and dips.

Today’s three delicious soup recipes give you more options to include EVOO in your bone-healthy diet, and some of the EVOO is added just before serving, to prevent heat degradation.

With sweet potatoes, cashews, and tomato sauce, this soup is perfect for autumn.

This is a creamy, smooth, pureed soup with the nutty, and comforting flavor of cauliflower.

Bone Appétit Makes It Easy To Cook For Your Bones

If you don't already have it, Bone Appétit makes bone-smart meal preparation easy. And now, Bone Appétit has a new lower price. Plus with the 30 Day Meal Planner, Calcilicious and Blender Magic, all included as free bonuses with your order of Bone Appétit, you’ll see how simple it is to eat your way to stronger, younger bones.