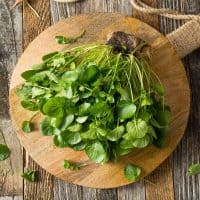 Cruciferous vegetables are well known for their numerous health benefits and high vitamin, mineral, and antioxidant density. Broccoli, kale, and cabbage are often mentioned for their nutrient content, but watercress is most often ignored.

Today we’ll look at this nutrient-dense leafy green and explain why it’s an important (and delicious!) food to include in your grocery list. Plus, you’ll get a recipe that’s sure to make you want to try watercress and make it a part of your osteoporosis diet.

Before the 19th century, watercress was considered a weed. But in the early 1800s, the British started cultivating it. It’s recognizable by its small round leaves and crunchy edible stems. Don’t be fooled by its humble size- watercress is full of bold flavor, with a peppery zing similar to arugula.

Watercress is closely related to Brussel sprouts, cabbage, and kale- but is lighter and easier to prepare than many of its cruciferous cousins. It’s not any less powerful though! Let’s have a look at what this little leaf provides.

Watercress is a cruciferous leafy vegetable with a peppery flavor.

The Nutritional Profile Of Watercress

Watercress holds the distinction of being number one on the US Center for Disease Control’s list of Powerhouse Fruits and Vegetables.1 This list compares how many and what amount of critical nutrients each plant contains in a 100 calorie serving.

If you’re going to eat a 100 calorie serving of any plant food, watercress is the most nutritionally dense choice, with a nutrient density score of 100 out of 100.

Here’s the nutritional breakdown of a single cup of chopped watercress2:

Of the 34 grams of watercress in a single cup, a remarkable 32.3 grams is water. That makes watercress an extremely hydrating food.

Some of those amounts might seem small, but consider that watercress delivers them alongside less than four calories per cup. A quarter of your daily vitamin C, a fifth of your Vitamin A and more than 100% of your Vitamin K packed into a single ingredient is a huge step toward reaching your daily nutritional goals.

The CDC ranks watercress number one on its list of powerhouse fruits and vegetables for its high nutrient density.

What The Nutrients In Watercress Can Do For You

Watercress is a rich source of Vitamin K1, also called phylloquinone, which is involved in blood clotting and liver health. Not to be confused with Vitamin K2 (menaquinone), which activates the calcium-binding protein osteocalcin to form calcium bonds. Vitamin K2 also works in synergy with Vitamin D to regulate osteoclasts, the cells that remove old bone to make way for newer stronger bone cells.4

Many people only think of Vitamin C as necessary for the immune system, but it is also vital for the production of collagen, which composes the majority of your bone’s living tissue.5 Collagen supports tensile strength in healthy bones, which helps prevent fracture. Also, Vitamin C is a potent antioxidant that prevents free radical damage that can harm your bones.

Vitamin A And Carotenoids

Watercress contains zeaxanthin and lutein, carotenoid antioxidants that are part of the Vitamin A family. They’ve been shown to reduce the risk of age-related macular degeneration and cataracts.6 Research has confirmed that reduced vision increases the risk of falls and subsequent fractures.7

Proper hydration is essential for your bones. Water is one of the three most significant components of bone, and it impacts strength, density, and the remodeling process.8 Drinking water is essential, but it's easy to forget that we can also choose hydrating foods- some of which announce their contents right in their name, like watermelon and watercress.

Watercress is a rich source of antioxidants, Vitamins K, C, and A, carotenoids, and water. All of these nutrients help to improve your health and protect your bones.

You can use watercress in many dishes as a replacement for lettuce and other greens. Try mixing it into your salads, adding it to soups and eggs, blending it into pesto or adding a little watercress as a green garnish to an entree.

Here’s an alkalizing recipe to kick off your new love affair with watercress.

Enjoy the zesty flavor of watercress knowing that you’re providing your bones with nutrients it needs. With few calories, watercress is the perfect green for anyone hoping to slim down but still eat well. Its nutrient content alone is reason enough to work it into your meals on a regular basis, and that’s easy to do given its versatility.