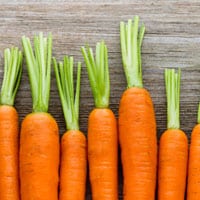 Summer’s drawing to a close in the northern half of the globe, and while we have to bid farewell to swimming pools and water parks, we get to usher in a whole new season with its own activities and delicious foods.

One of these foods is the humble carrot, a root vegetable that’s in season from October to April. Of course, everyone is familiar with carrots, but the latest research has revealed some previously unknown facts about them: the beta-carotene content of carrots makes bones more fracture-resistant, and they contain a natural pesticide that helps prevent cancer.

We’re going to explore the health benefits of carrots including this insightful research in today’s post, and you’ll also find a new scrumptious recipe for enjoying these brightly-colored roots.

Carrots are an ancient vegetable, cultivated for thousands of years in Asia, Europe, and the Middle East. Interestingly, these early carrots were not orange, but instead, they were yellow, purple, and red, with orange becoming the standard carrot color after the 16th century.

Carrot tops are green regardless of the variety, with a fern-like appearance resembling dill and fennel. But the vegetable is named for its long taproot – “carrot” is derived from the Greek word “karoton,” which refers to its horn-like shape. Speaking of names, the nutrient beta-carotene, which we’re going to look at in detail in a moment, was named for the carrot and not the other way around.

Carrots’ capacity for long storage makes them an economical choice, and organic varieties are quite affordable. This is important, because carrots rank #24 on the Environmental Working Group’s list of 48 fruits and vegetables with pesticide residue.

Thanks to their excellent nutritional profile, carrots are a Foundation Food in the Osteoporosis Reversal Program. In fact, these roots contain no fewer than 11 Foundation Supplements for building bone.

B vitamins play a significant role in bone health. Vitamin B1 (thiamine) helps metabolize carbohydrates and benefits the brain and nervous system. Vitamin B2 (riboflavin) boosts healing by stimulating red blood cells, and like biotin, it promotes healthy fingernails, skin, and hair. Vitamin B3 (niacin) serves a similar function. Vitamin B5 (pantothenic acid), helps release energy from foods and is a component of coenzyme A.

Vitamin B6 (pyridoxine) works with Vitamin B9 (folate) to lower levels of bone-weakening homocysteine. And in combination with B12 (cobalamin) and folate, it converts homocysteine into other, less harmful amino acids.

Also known as B7 or Vitamin H, biotin helps metabolize fats and proteins. It’s also been shown to increase the strength and integrity of fingernails as well.

Carrots contain B9 as well, or folate. It acts as a coenzyme with B12 and Vitamin C, playing an essential role in red blood cell formation and DNA synthesis.

Vitamin C, a powerful antioxidant, plays an important role in the remodeling process, suppressing osteoclasts and stimulating osteoblasts. And its antioxidant action reduces inflammation and staves off oxidative damage to bones (more on antioxidants in a moment). Vitamin C is also crucial for the formation of collagen found in bone and cartilage.

Manganese is a trace mineral involved in the synthesis of connective tissue and proteins, and helps metabolize fatty acids. Manganese joins with copper and zinc to synthesize the antioxidant superoxide dismutase.

Vitamin K is required for the chemical alteration of osteocalcin into a calcium-binding protein. And MK-4, a form of K2, actually inhibits osteoclast formation. A great deal of research points to Vitamin K as indispensible for bones.

Here is another vitamin that is also an antioxidant. Vitamin E contributes significantly to building muscle, and that’s an essential component in rejuvenating and maintaining strong bones.

Potassium is an electrolyte (meaning it helps regulate the balance of water inside and outside cells) as well as a powerfully alkalizing mineral, contributing to muscle growth and contraction and nerve function.

Remarkably, copper is found in every tissue in the body. As mentioned above, it works with zinc and manganese to form a powerful trio that makes up superoxide dismutase. Copper performs many important functions in the body, including enzymatic processes that produce connective tissues like collagen.

The term “Vitamin A” actually refers to a broad group of nutrients including lutein, alpha-carotene, beta-carotene, gamma-, delta-, epsilon-, and zeta-carotene, astaxanthin, neoxanthin, and many more.

All the nutrition packed into one orange root is truly amazing! But there’s more – take a look at carrots’ antioxidant content.

Speaking of beta-carotene, carrots rank second only to sweet potatoes as a source of this vital nutrient. Half a cup of sliced, cooked carrots has 78 grams of beta-carotene. This nutrient is, as noted above, one of many forms of Vitamin A. It’s excellent for skin health, and research shows that beta-carotene actually reduces fracture risk.

A study included 63,257 men and women over the age of 45 with a particular emphasis on lean, elderly men whose low Body Mass Index (BMI) put them at greater risk for hip fracture. Researchers examined the connection between carotenoids (including beta-carotene) and hip fracture risk, and they found that:

“…hip fracture risk decreased with increasing intakes of total vegetables and of total carotenoids, particularly β-carotene. The protective effect was higher in lean men than in men with higher BMI.”1

This is great news for those of us who love colorful fruits and veggies, including carrots!

Raw Vs. Cooked – Which Is Better?

Any time there’s a discussion of a nutrient contained in a food that can be enjoyed both raw and cooked, it makes sense to look into how that nutrient acts under various cooking conditions. Beta-carotene is released and made more bioavailable when cooked, but ironically, the longer carrots are cooked the more beta-carotene is lost – especially in water.

When baked or roasted without water, carrots lose only about 5% of their beta-carotene content, whereas boiling or stir-frying results in about 10-15% loss. So your best bet, if you like cooked carrots, is to use a cooking method that is fairly quick and does not involve much water. Of course, eating boiled or stir-fried carrots isn’t a bad thing at all; it’s just a good idea to balance consumption of carrots cooked this way with carrots cooked another way (or eaten raw, which is one of my favorite ways to eat them).

The subjects were smokers who smoked more than a pack of cigarettes a day for an average of 36 years each, and they were divided into three groups: one that took synthetic beta-carotene, a second that took synthetic vitamin E, and a third that received both. The fourth group received a placebo.

When the lung cancer rates increased among the beta-carotene group2, the public took this partial information and ran with it. Suddenly, “beta-carotene supplements cause cancer” became a widely-whispered phrase. But multiple key facts were not reported:

Therefore, there’s no need to worry about taking a reputable supplement with beta-carotene with a dosage of 5,000 IUs daily.

Danish scientists have made a fascinating discovery about carrots. They contain a compound called falcarinol, which acts as a natural pesticide while the carrot is growing in the ground. Falcarinol also acts as a fungicide, preventing fungal diseases like licorice rot (black spots on the roots).

To test this compound’s anti-cancer properties, researchers used 24 rats with pre-cancerous tumors. The rats were divided into three groups, and each group received a different diet. Two groups received either falcarinol or raw carrots in their regular feed; the third group ate a regular diet and served as a control.

The rats were fed these diets for 18 weeks, at which point the scientists found that both groups of rats that ate the carrots or the falcarinol were one-third less likely to develop full-blown cancer than the rats in the control group.https://saveourbones.com/scientifically-proven-carrots-effectively-reduce-hip-fracture-risk/3
Head study author Dr. Kristen Brandt states that:

“We already know that carrots are good for us and can reduce the risk of cancer but until now we have not known which element of the vegetable has these special properties.”3

Place all ingredients in your blender, and whirl until smooth.

Carrots are delicious on their own, but variety is important for motivation and optimal nutrition. You’ll find all sorts of delicious carrot recipes in Bone Appétit, such as Carrot Craze Muffins (page 13), Bunny’s Carrot Soup (page 42), and Glazed Carrots (page 33).

If you like smoothies, then you’ll love Blender Magic, one of the bonuses that’s included with your order of Bone Appétit. Many of the smoothie recipes in Blender Magic include carrots, such as The A (apple) B (banana) C (carrots) on page 13, or Amber Delight on page 12.

Calcilicious, a collection of calcium-rich recipes, and the 30 Day Meal Planner which gives you a month’s worth of bone-smart meals and snacks, are also included. With more than 200 recipes, Bone Appétit covers all the bases so you can get started right away preparing bone-healthy meals.

Do you have a carrot recipe you’d like to share? If so, and for any other thoughts about today’s topic, please feel free to leave a comment below.