Choosing A Natural Osteoporosis Therapy? You Are Not Alone - Save Our Bones

Choosing A Natural Osteoporosis Therapy? You Are Not Alone 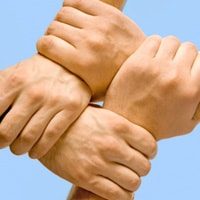 If you feel alienated and ‘on your own’ because you are considering or are already following an alternative treatment for osteoporosis or osteopenia, I have great news for you: you are definitely not alone.

You see, I know firsthand that it’s not easy to turn away from your doctor’s mainstream treatment recommendations. And sometimes, it can feel as though you are swimming upstream, against the tide… in a cold and dark ocean.

I know it because I felt the same way during my quest for the truth about osteoporosis.

But even though there were times when I thought I might drown, I never sank to the bottom. And each time I found new knowledge, I gained momentum and rose to the surface with even more energy than before.

Each piece of information I gathered, gave me the strength I needed to pursue my goal and to finish my endeavor.

I kept reminding myself that pioneers are often ridiculed and ignored… that new discoveries are usually not readily accepted by the mainstream establishment.

And after putting my research into use, I finally solved my own osteoporosis problem and my bone density results increased by a whopping 20%.

When you realize that you're part of a community that is growing by leaps and bounds, it becomes easier to decide against taking osteoporosis drugs and to follow alternative solutions.

Alternative therapies are used by a majority of adults over 50

CAM – short for Complementary and Alternative Medicine – is best described as a variety of medical and health care systems, practices, and products not considered to be part of mainstream medicine. Diet-based therapies and natural supplements are a very popular form of CAM. Of course, the Osteoporosis Reversal Program is a perfect example of a CAM therapy.

While there is little or no mention of CAM in the media or at your doctor’s office, it is rapidly gaining ground in the US. “Millions of Americans every year are turning to Complementary and Alternative Medicine,” says Richard L. Nahin, Ph.D.

Dr. Nahin was involved in a survey that shows startling results: 38 percent of American adults use CAM in one form or another (Barnes, PM; Bloom, B; Nahin, R. CDC National Health Statistics Report #12. CAM Use Among Adults and Children: United States, 2007. December 2008).

Surprisingly, those aged 50 to 59 are the most prevalent medical “adventurers” in the US. In fact, almost two-thirds of adults 50 and older use some form of CAM. (Barnes P, Powell-Griner E, McFann K, Nahin R., CDC Advance Data Report #343. Complementary and Alternative Medicine Use Among Adults: United States, May 2004).

So if until now you thought that you are part of a minority group, you can rest assured that that's not the case.

A well-known market principle is that demand for a certain product will sooner or later bring about a supply of that product. Fortunately, this also applies to CAM, and it is quite possibly the reason why a variety of alternative medicine courses are popping up in medical colleges throughout the United States.

Further supporting this important development, the curriculum director of the University of Minnesota’s alternative medicine department, Mary Jo Kreitzer, comments that “Consumers are demanding it (alternative therapies)… You could say that in that respect, we are advocates.”

And when several students attending Medical School at the University of Minnesota were interviewed by an Associated Press writer in 2007, they expressed their delight at having the opportunity to learn about alternative medicine and said they would be more willing to recommend a variety of CAM therapies.

This is a welcome change in the natural therapy arena, especially since researchers document that when patients tell doctors about their CAM use, most of the time physicians brush off the topic (Corbin Winslow L., Shapiro H., “Physicians want education about complementary and alternative medicine to enhance communication with their patients.” Archives of Internal Medicine, 2002 May 27).

This might be explained by a survey of doctors that confirms they feel unqualified to discuss CAM, mainly due to a lack of training in that area of treatment (Milden S.P., Stokols D. “Physicians’ attitudes and practices regarding Complementary and Alternative Medicine.” Behavioral Medicine, Summer 2004).

As the CAM trend continues to expand in the future, doctors will have to keep up with the latest alternative methods or be ready see their patient base shrink.

Small steps in the right direction

Even though many medical schools have elective classes on CAM therapies, students are not openly encouraged to enroll in those courses. For example, a spokeswoman for Harvard University said that Harvard does not advocate alternative medicine. This statement gives us a clear indication that the medical establishment, while recognizing that there is a growing need for doctors to learn about alternative therapies, is still unconvinced of its benefits.

The Save Our Bones community

And now, you and I are really part of something special. I’m talking about this natural osteoporosis community that we’re a part of. Did you know that an average of 16,100 osteoporosis ‘truth-seekers’ just like you are joining us every week?

It’s true. An average of 2,300 fellow ‘osteoporosis conquerors’ just like you and me are joining us EVERY day!

And at the time I’m writing this, tens of thousands of you have used the Osteoporosis Reversal Program to naturally conquer osteoporosis and osteopenia and increase your bone density naturally.

So when you wish to tackle osteoporosis without taking the commonly prescribed drugs, your knowledge-based convictions play a crucial role. Like millions of others, you can establish an open dialogue with your doctor, discuss what he or she recommends with the understanding that there are natural alternatives to the mainstream treatment.

And remember this: you are not alone.