All About The 2021 Dirty Dozen And Clean Fifteen Lists 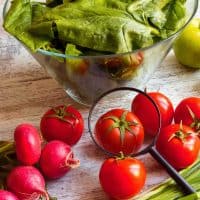 The Environmental Working Group has recently released its yearly lists of produce that contain the highest and lowest levels of residual pesticides.

Today we'll take a closer look at these fungicides, why it's important to avoid them. And, of course, you'll also get this year’s lists of the most and least pesticide-laden conventionally grown fruits and vegetables.

Each year the Environmental Working Group (EWG) conducts a study using data from fruit and vegetable samples collected and analyzed by the USDA and the FDA. The EWG ranks the pesticide contamination found by those government agencies in 46 popular fruits and vegetables, drawing from more than 46,075 samples.1

The USDA processes each item before testing as would consumers before eating them. For example, peelable items are peeled first, and those with edible peels are rinsed before eating. This ensures that the tests are measuring the likely pesticide exposure of the average person who might buy and eat these foods.

This year, the EWG also did its own testing. EWG scientists evaluated 25 samples of conventionally grown grapefruit, lemons, mandarins, and oranges. They peeled the fruits and had an independent laboratory test for pesticide residue.

The Environmental Working Group ranked 46 popular fruits and vegetables based on pesticide levels detected on over 46,075 samples tested by the USDA or the FDA. They also performed independent testing on citrus fruits.

The EWG detected two hormone-disrupting fungicides on nearly 90 percent of the non-organic citrus fruits they tested. These two fungicides are imazalil and thiabendazole. More than half of the samples contained both.2

These two chemicals disrupt the body's endocrine system, which secretes and activates hormones to regulate metabolism and growth.

In addition to to its effect on hormones, imazalil has been classified by the Environmental Protection Agency (EPA) as “likely carcinogenic to humans,” based on evidence that it caused liver and thyroid tumors in rats. Despite this, the EPA considers the residual exposure from fruit too small to pose a danger to humans.

However, in 2018, the European Food Safety Authority proposed reducing the chemical’s tolerance level to 10 parts per billion– which is one thousand times lower than the current US level.2

Thiabendazole, the other fungicide found on citrus fruits, has been found to harm the immune and nervous systems and thyroid gland in animal studies. The EPA stated it needed to see further studies about its developmental thyroid toxicity but later waived their request. The European Food Safety Authority has determined they don't have sufficient data to confirm its hormone-disrupting properties.2

These fungicides, like all synthetic chemicals, are acidifying and toxic. Furthermore, the impact they have on your body, potentially hindering your endocrine system, could have negative effects on your bone health. Disruption of regular thyroid function interferes with your bone remodeling process since the thyroid produces hormones that regulate that process.

In addition to the peeled fruit, the USDA tested non-organic orange juice samples and found detectable levels of imazalil in 21 percent of samples and thiabendazole in 35 percent.2 The concentration of the fungicides was two to three times lower than it was on the whole fruit. However, its presence is a good reason to choose organic citrus juices or skip the juice altogether, since juices are very high in sugar.

The EWG’s independent tests and the USDA tests found that conventionally grown citrus fruits contained two fungicides known to interfere with hormones. Imazalil caused cancer in animal studies. The USDA even found a fungicide in conventional orange juice. These chemicals are acidifying and if they interfere with the thyroid gland that may alter the bone remodeling process.

In addition to their additional testing of citrus fruits, the EWG compiled their yearly list of the conventionally grown fruits and vegetables that contained the highest levels and largest number of pesticides.

Many of the types of produce tested bore residual traces of multiple pesticides, including chemicals that are known neurotoxins. Studies have found that participants who ate organic foods were less likely to develop a variety of ailments, including Type 2 diabetes, high body mass index (BMI), and non-Hodgkin’s lymphoma. Those studies couldn't tell whether these health benefits were directly the result of avoiding pesticides. However, researchers have determined that people who ate greater quantities of fruits and vegetables high in pesticides had higher levels of pesticides in their urine.3

You can dramatically reduce the amount of pesticides your body has to process by only eating organic varieties of the dozen foods on the Dirty Dozen List. Do your best never to eat conventionally grown varieties of the following items:

The above list contains the 12 foods that the EWG found to contain the highest concentration and largest number of pesticides. Avoid eating conventionally grown varieties of these items. Instead, find organically grown versions.

The Clean Fifteen lists the foods that were found to contain a minimal amount of pesticide residue, including if they are conventionally grown. Almost 70 percent of these samples did not contain any trace of pesticides. Of those which did show traces, only eight percent had more than one type of pesticide.

It's always better to play it safe and seek an organic variety for all fruits and veggies consumed. However, these are the foods to reach for if no organic produce is available. The one exception from this list is corn. The Save Institute recommends that Savers only consume organic corn because conventionally grown corn is genetically modified.

The Clean Fifteen lists the conventionally grown foods that were found to bear the lowest concentration of pesticides. Seventy percent of these samples did not show any trace of pesticides. If organic produce isn't available, these are the safest and cleanest options, except for corn, which is genetically modified.

The EWG's valuable work provides a useful yearly reminder to purchase organic produce whenever possible. This year, we can also see the importance of buying organic citrus fruits.

A bone-healthy diet and lifestyle include a variety of small but powerful choices like the ones above. Prioritizing the health of your bones and your whole being is central to the approach of the Osteoporosis Reversal Program.

It can help you transform your daily life into a journey to stronger bones and better overall health, one choice at a time. Keep moving toward your health and wellness goals, and don't forget to celebrate your progress every step of the way.