7 Foods With More Vitamin C Than Oranges (And With Less Sugar!) - Save Our Bones

7 Foods With More Vitamin C Than Oranges (And With Less Sugar!) 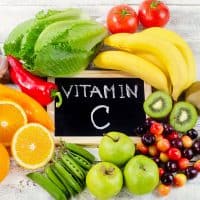 When the first sniffles of the season arrive, you might turn to a tall glass of orange juice. After all, oranges are packed with flavonoids, minerals, fiber, and a multitude of Vitamins, including the powerful multi-tasking antioxidant, Vitamin C.

While refreshing and delicious, orange juice contains high levels of bone-depleting sugar – a whopping 21 grams, and one medium-sized orange contains 9 grams of sugar. Savers know that excessive sugar intake is unhealthy, since among other detriments, it causes bone loss and depresses the immune system.

Fortunately, oranges are not the only good source of this vital Foundation Supplement. Today we bring you seven foods that contain more Vitamin C than oranges. Further, each one is low in sugar, and some are cruciferous vegetables that help to cleanse the body.

Listed as a Foundation Supplement in the Osteoporosis Reversal Program, Vitamin C (ascorbic acid) is crucial for strong immunity, bone health, and much more. Here are some of the essential functions it performs:

Does Vitamin C Prevent Colds and The Flu?

Studies showing whether Vitamin C prevents colds and the flu have had conflicting results so far.1,2 However, it decreases both their severity and the duration, with some studies pointing to a one-day reduction in symptoms.3

How Much Vitamin C Should I Take?

The Osteoporosis Reversal Program recommends a minimum intake of 500 mg of Vitamin C per day, preferably in the form of ascorbic acid. An ideal dose is 2,000 mg per day. Since Vitamin C is water-soluble, the body is capable of ridding itself of excess, as needed.

A good way to gage your reaction should you wish to increase your Vitamin C dosage is to consume it to “bowel tolerance”. This is a method of utilizing Vitamin C in increasing doses, stopping just short of the amount that would produce gas, bloating, or loose stools.4

A major study published just this week adds to the already-existing body of knowledge that Vitamin C is essential for healthy bones.

Foods With More Vitamin C Than Oranges And With Less Sugar

While oranges are a healthy fruit when consumed in moderation, as noted earlier, they are not considered a low sugar fruit. Excess sugar has been shown to suppress the immune system.7

Further, excess sugar in the diet reduces Vitamin C concentration in cells. Sugar and Vitamin C are in direct competition with each other, since insulin is the carrier that transports both across the cell wall. Too much sugar means that insulin is “too busy” to deliver Vitamin C into the cells, where it needs to be to do its job.

While oranges are a strong source of this important antioxidant, containing approximately 52 mg of Vitamin C, there are several foods that exceed the amount of Vitamin C in an orange, including vegetables, and they are listed here:

One large zucchini boasts a whopping 58 mg of Vitamin C. Further, this low-glycemic food will not spike your blood sugar, with only 2.9 grams per cup. Zucchini is also a good source of bone-essential nutrients such as manganese, Vitamin B6, Vitamin K, and iron. It’s best to consume them unpeeled, as it is the most nutrient-dense portion of the vegetable.

When consuming bell peppers, be certain to buy organic as they are heavily sprayed with pesticides and for that reason are included in this year’s Dirty Dozen list.

Kale is a nutritional powerhouse that contains 80 mg of Vitamin C per cup while yielding only 1.6 grams of sugar. This cruciferous vegetable is also packed with Vitamins A and K, as well as iron. Rich in antioxidants, kale protects your bones and body from oxidative damage.

This detoxifying vegetable contains 78.4 mg of Vitamin C per cup. As with other cruciferous vegetables, broccoli is low in sugar with only 1.4 grams per cup. Also, it’s an excellent source of calcium, Vitamin K, and antioxidant flavonoids.

This bone-building vegetable is closest to the orange in its Vitamin C content, at 52 mg of Vitamin C per cup. However, cauliflower contains only a third of the amount of sugar compared to an orange, at a mere 2.4 grams.

When purchasing cauliflower, it is acceptable to buy conventional, as it has low pesticide levels, and is listed in the Clean Fifteen.

Along with making sure you take adequate amounts of Vitamin C and limit your sugar consumption, to ensure your immune system and bone remodeling can function at optimal levels, you should consider a twice-yearly cleanse.

Studies have confirmed that toxins circulating in the body suppress the immune system.8 Additionally, the liver and the kidneys play an important role in detoxification, and the more toxins they need to handle, the less efficiently they can perform the functions necessary to build your bones.