A Delicious Bone-Building Burrito: Each Ingredient Is A Rich Source Of Magnesium Or Manganese - Save Our Bones

A Delicious Bone-Building Burrito: Each Ingredient Is A Rich Source Of Magnesium Or Manganese 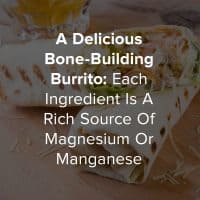 Variety is the spice of life, and Savers know that bone-healthy nutrition does not have to be boring. That's why today we are bringing you one of our favorite recipes: Bone-Building Burritos.

The legend of the beloved burrito has been shared by many, but if you have not heard it yet, here it is.

In the early 1900s, during the Mexican Revolution, a man by the name of Juan Mendez had a small food business in Chihuahua, Mexico. In an attempt to keep his food warm, he wrapped it in a tortilla. As the legend goes, a donkey, or burro (in Spanish), was used as a means of transporting his food. Hence, the diminutive form would be a burrito.

Our Bone-Building Burrito recipe has no less than twelve Foundation Foods, all wrapped neatly together. Also, every single ingredient included in the recipe contains either magnesium or manganese – both of which are bone-building superstars!

Magnesium: A Key-Mineral For Bone Health

Magnesium, the fourth most abundant mineral in the body, is an essential element and it is required to synthesize glutathione, the Master Antioxidant. Stored in our organs, muscles, and bones, this Foundation Supplement is responsible for over 300 enzymatic processes in the body, including the regulation of biochemical reactions, protein synthesis, muscle and nerve function, blood glucose control, and blood pressure regulation.1,2 In addition to being responsible for cellular energy production, magnesium is required for the synthesis of the genetic molecules DNA and RNA.

Magnesium is necessary for the active transport of ions, such as potassium and calcium, across cell membranes. In this role, it affects muscle contraction, the conduction of nerve impulses, and normal heart rhythms.

While magnesium is a rock-star in and of itself, it shines even brighter when paired with calcium. Their relationship is complex, but once understood, it displays the importance of the two working in synergy. Magnesium is responsible for balancing calcitonin and PTH, two hormones that directly affect the bone. Calcitonin, produced by the thyroid, stimulates the absorption of calcium into the bones. PTH, produced by the parathyroid, removes calcium from the bones and deposits it in other tissues. As you can see, magnesium significantly impacts the structural development of bones.

Our bodies contain approximately 25 grams of magnesium, with 60% stored in bone.3 The remaining magnesium is typically found in soft tissue, with only 1% in blood serum. As such, it is difficult to measure a magnesium deficiency, which can lead to heart problems, insulin resistance, high blood pressure, kidney disease, and even migraines.

A number of studies have illustrated the importance of magnesium for bone health, with one study showing that magnesium supplementation increased bone density within a year.4 In a new study published in the British Journal of Nutrition, researchers concluded that women meeting the recommended magnesium intake (320 mg per day) were at a 27% decreased risk for future fractures.5

Manganese, a naturally occurring mineral in our body, is an essential component of many enzymes. While abundant in the earth and within plants, only trace amounts are present in humans. The highest concentration of this Foundation Supplement is found inside bones. Manganese plays a vital role in a number of physiological processes and facilitates the activities of others.

For example, manganese is a component of manganese superoxide dismutase (MnSOD), the primary antioxidant enzyme in the mitochondria. Here, manganese superoxide dismutase neutralizes free radicals in the human cell, thereby minimizing the damage that may ensue throughout the body. These findings were confirmed by a University of Iowa study review that emphasized the role of manganese in protecting against this oxidative stress.

According to the study authors:

“The delivery of MnSOD to the mitochondrial matrix is essential for organelle function.”6

Manganese also activates several enzymes responsible for the metabolism of carbohydrates, amino acids, and cholesterol.7 For example, it is required for the activation of prolidase, an enzyme that creates the amino acid, proline, for collagen formation in human skin cells. Without manganese, the chain reaction of collagen creation is severed.8

When it comes to bones, manganese is an important player. It is a cofactor for glycosyltransferases. These enzymes must be present for the synthesis of proteoglycans, which are a required protein for the formation of healthy bone and collagen.

While there has been a great deal of research on the role of manganese as it relates to bone health, one study on deer antlers suggests that osteoporosis may actually be caused by a manganese deficiency, preventing the efficient absorption of calcium.9

Which Foods Contain An Abundance Of These Bone Building Minerals?

Now that you understand the vital role that magnesium and manganese play in the health of your bones and body, let’s examine the best ways to incorporate these powerful minerals into your diet.

Each of the following foods is included in the delicious recipe below. Take a look!

Avocado*: One medium avocado contains 58 mg of magnesium. This creamy and delicious fruit is also packed with several other Foundation Supplements such as Vitamins K, D, and C, as well as boron, copper, and folate.

Black beans*: Black beans, while acidifying, are packed with magnesium. In fact, one cup of black beans contains an impressive 120 mg of magnesium. They are also rich in potassium, iron, and fiber. Additionally, they contain good amounts of bone-saving antioxidants.

Salmon*, Mackerel*, Halibut*, or Haddock: Fish, especially fatty fish, is packed with magnesium. One salmon filet, for example, contains 106 mg of magnesium. Vitamin D, potassium, and selenium are also abundant in fish. And, as Savers know, the fish listed here are anti-inflammatory in nature.

Yogurt*: One cup of whole-milk yogurt (preferably grass-fed and organic) contains nearly 30 mg of magnesium. It is also an excellent source of calcium and zinc, two Foundation Supplement powerhouses.

Corn: There are 33 mg of magnesium in one ear of corn. Make sure you get it organically grown. Otherwise, chances are the corn will be genetically modified (GMO). Rich in Vitamin C and loaded with the phytochemicals lutein and zeaxanthin, corn adds a sweetness to a meal that can’t be replicated elsewhere.

Onion*: In addition to its high Vitamin C and fiber content, one cup of chopped onions contain 0.2 mg of manganese, which is equivalent to 10% of the recommended daily value. A good source of polyphenols and bone-saving antioxidants, they are a great addition to your diet.

Garlic: Just three cloves of garlic contain 0.2 mg of manganese. Garlic has numerous health benefits, and one study demonstrated the positive effect it has on bone density.10
Tomato*: One serving of tomatoes contains 0.1 mg of manganese. Packed with the powerful antioxidant lycopene, tomatoes have been scientifically shown to protect and stimulate the production of bone-building osteoblasts.11

Foods Packed With Both Magnesium and Manganese

Brown Rice*: Although brown rice is an acidifying food, because of its numerous health benefits, it's often regarded as a superfood. Just one cup of this grain provides you with 88% of the daily value for manganese and 20% of your daily needs for magnesium. As a bonus, it is also rich in fiber, thus reducing inflammation in the body. But make sure you consume it in moderation, since rice (and more so brown rice), has been found to contain arsenic.

Cabbage*: This alkalizing vegetable contains both magnesium and manganese. In fact, just one cup of shredded cabbage provides 19 mg of magnesium and 0.1 mg of manganese. As a member of the cruciferous family, cabbage is packed with several bone-building nutrients such as Vitamin C, Vitamin K, potassium, and folate.

Lima Beans*: While most beans are acidifying, the lima bean is alkalizing and contains 12 Foundation Supplements. One cup of lima beans offers 81 mg of magnesium and 0.97 mg of manganese.

Spinach*: Popeye knew a thing or two about strength, and he loved spinach. One cup of cooked spinach contains 1.7 mg of manganese, or 84% of the daily recommended and 157 mg of magnesium.

Pine Nuts*: If you are looking to add a bit of buttery flavor to your recipes, look no further than the pine nut. These tasty seeds contain more manganese than any other ingredient in this recipe. Just a half-cup of pine nuts contains 6 mg of manganese, or nearly 300% of your daily recommended intake! Equally impressive, it contains approximately 170 mg of magnesium. It is also filled with several bone-building Foundation supplements such as Vitamins B1, B2, and B3, zinc, and Vitamin K.

Whole wheat tortilla*: Whole wheat flour is a source of several micronutrients, including manganese and magnesium.

While these foods can certainly be enjoyed separately, why not combine them for their amazing flavors and the synergistic effect?

At the Save Insitute we love to introduce creative bone-healthy dishes, but we also know that your time is precious and that eating a bone-healthy diet should not have to be time-consuming. With that in mind, the ingredients in our Bone-Building Burrito recipe can be prepared ahead of time with little fuss, so in less than 15 minutes, you’ll have this delicious recipe ready.

Bone Appétit, the companion cookbook to the Osteoporosis Reversal Program, was created to help those who wish to reverse osteoporosis or osteopenia naturally, right from their own kitchen.

This easy-to-follow recipe book will help you to prepare meals that contain not only magnesium and manganese, but all of the Foundation Supplements listed in the Osteoporosis Reversal Program. And with the 30 Day Meal Planner, one of the bonuses included with Bone Appétit, you’ll have an entire month of bone-smart meals (including snacks) guiding you on your natural bone health journey.

In Bone Appétit you will find more than 200 mouth-watering, bone-building recipes that are delicious and easy to prepare, so you can enjoy meals that strengthen and rejuvenate your bones.