Mind Over Matter: How Your Thoughts Impact Your Bones - Save Our Bones

Mind Over Matter: How Your Thoughts Impact Your Bones 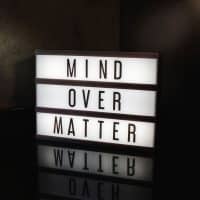 Our thoughts and ideas about our health have a measurable impact on our physiology, according to a study published in the journal Nature. The results of the study give credence to the idea of “mind over matter”– that our understanding and belief can change our physical selves.

Today we'll take an in-depth look at this astonishing study, and at how to harness the power of REthinking bone health, authority, and the harm caused by the Medical Establishment's scare tactics.

How Health Beliefs Change The Body

Then the individuals were genotyped to determine whether their genetic makeup might influence their performance in the tests. A certain genetic profile might indicate a likelihood of more or less physical endurance during exercise, and satiety when eating.

The participants' results shifted in the second test to reflect their genetic “diagnosis” regardless of whether or not that diagnosis was correct. For example, when participants were told that their genes cause them to release more of the hormone that creates the feeling of fullness, their bodies released 2.5 times more of the hormone than they had before they were given that diagnosis. Those participants also ate less because of this physical response. This effect happened regardless of the participants' actual genetic makeup.1

For the exercise test, a random selection of participants was told that they had poor endurance genes that might make them tire easily. When those participants took the test again, they couldn't run as long, had reduced lung capacity, and expelled carbon dioxide less effectively. Those who were told they had good endurance genes ran longer than they had before, regardless of what genes they actually carried.1

The conclusion of the study was clear: if you believe a physical reality about yourself to be true, your body will work to manifest that belief.1

A study found that when a person believes their genes will impact physical performance, they experience that impact, regardless of their genetic makeup.

The results of this study reinforce the REthink step of the RESTORE protocol, a primary tenet of the Osteoporosis Reversal Program. The study shows that receiving a diagnosis aligns your outcome with the diagnosis. That's why we should REthink osteoporosis diagnosis, and stop thinking of osteoporosis as a disease entirely.

When a medical professional in a position of authority tells you that you have a disease, that action has an impact on your mind and body. For many, an osteoporosis diagnosis causes fear and stress, which causes the release of the bone damaging hormone cortisol.2

When doctors treat osteoporosis as a debilitating disease that makes you frail and likely to break a bone, they set you up for that outcome. Just like in the study above, the diagnosis can create the result.

The Save Institute defines osteoporosis as a condition of the skeletal system– a condition caused by the body's attempt to correct a biochemical imbalance, and alterable through dietary and lifestyle changes.

This focus on your agency (your ability to improve your bone health) and goals (strong, high-quality bones) moves you toward a positive outcome.

Osteoporosis diagnoses create fear and feelings of helplessness, both of which lead to negative health outcomes. Instead, the Save Institute recommends you REthink the definition of osteoporosis and REthink the authority of medical professionals who don't engage with your ability to improve your bone quality naturally.

Think Healthy And Be Healthy