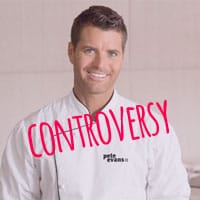 This is exactly what happened to famous Australian chef Pete Evans, who has ruffled the feathers of doctors and scientists for daring to suggest a drug-free, nutritional approach for osteoporosis.

I, for one, commend his attitude, and I’d like to share with you today the details of his latest confrontation with the Establishment.

Pete Evans may well be asking himself the same question!

In fact, he posted this on his Facebook page:

“I can't help but find it so bizarre as to why some people find my food choices so offensive.”

Here’s what happened. A fan wrote this query as part of a Q&A conversation on Chef Pete’s Facebook page:

“I have been diagnosed with Osteoporosis. My doctor insists that medication is the only way, can Paleo help?”

(This should sound familiar to many Savers – with very few exceptions, drugs are touted as “the only way” by the Medical Establishment.)

“I would strongly suggest removing dairy and eating the paleo way as calcium from dairy can remove the calcium from your bones.”

“…read one of my comments below on calcium – most doctors do not know this information.”1

In making such a recommendation, Chef Pete unwittingly stepped onto the Medical Establishment’s “turf,” creating a firestorm of criticism and contempt for the chef.

Endocrinologist and professor Peter Ebeling, who also happens to be a medical director of Osteoporosis Australia, inadvertently underscored Chef Pete’s point about medical ignorance with his response:

“The keystone to preventing osteoporosis is adequate calcium intake and this is achieved by three (daily) serves of calcium-rich foods like dairy. Dairy is the most easily available source and has the highest calcium content in it.”2

It’s fairly obvious that Dr. Ebeling does not know the latest information about dairy, calcium, and osteoporosis!

And Dr. Brad Robinson of Brisbane had this to say to Chef Pete:

“You are a chef, NOT a doctor. …You do not have access to information that us uneducated doctors do not. Your astounding advice about osteoporosis would be amusing if it wasn’t so potentially damaging…Can we make a deal? You don’t give medical advice and I won’t tell you how to best shuck oysters. Agreed?”2

Let’s take a closer look at these scathing comments

First, let’s consider the endocrinologist’s assessment that the “keystone to preventing osteoporosis” is three servings of dairy a day…if this is the case, why does anyone get osteoporosis in dairy-consuming regions of the world?

As it says in Chapter 6 of the Osteoporosis Reversal Program:

According to the Australian Dairy Industry’s 2015 report, Australians consume 2,481 million liters of milk annually, which works out to 105 liters per person each year.3 It looks like there is no shortage of dairy consumption in Australia, so if the endocrinologist was correct, then no one in Australia (or any milk-drinking country) should have osteoporosis. Of course, this is not the case.

Notice that Chef Pete suggested that his fan stop consuming dairy products, not that she should never start. That’s because she, like the vast majority of Australians, was undoubtedly already consuming dairy. And she had osteoporosis. It seems that the Medical Establishment refuses to connect the dots here!

If the doctors refuse to face the facts and, in spite of the clear scientific evidence, continue to advise their osteoporotic patients to drink milk, why should a celebrity food expert like Chef Pete have to keep silent about nutrition’s role in osteoporosis? After all, the study of food and nutrition is a very small fraction of what’s taught in medical school, while food studies are certainly a huge portion of a chef’s education. Yet mainstream doctors consider themselves to be the undisputed experts on the topic. Incredible!

The Medical Establishment Is Also Contemptuous Of You, The Public

At the Save Institute, we believe that the information presented in the Osteoporosis Reversal Program and on this site “… is intended to help you make informed decisions about your health and to cooperate with your healthcare provider in a joint quest for optimal wellness.”

The Medical Establishment, however, does not believe that the average person is capable of making decisions about his or her health.

“It is influencing vulnerable others – people who are time-poor – and will unfortunately just look at celebrity endorsement and think it must be good and follow the argument without delving into the facts.”4

Fortunately, Savers know better than to follow anyone’s advice blindly, including mine. I respect the Saver community’s ability to think for themselves, and I’m quite sure that Chef Pete has the same respect for his fans.

The Mere Act Of Questioning Threatens The Medical Establishment

There’s no doubt that when it comes to foods like dairy, controversy abounds. The Establishment seems to “protect” the dairy industry and promote it as a viable calcium source despite overwhelming evidence that this is outdated, ineffective, and even damaging advice.

The same attitude extends to any mainstream practice where the truth has the potential to upset tidy business deals. For instance, Chef Pete’s outspoken stance on water fluoridation threatens the relationship between fertilizer manufacturers and the municipalities who buy their toxic byproduct (fluoride) to add to their water supplies.5

The Osteoporosis Reversal Program Steps On The Establishment’s Toes

I admire Chef Pete Evans for standing firm in his beliefs in spite of the Establishment’s backlash. While the Osteoporosis Reversal Program does not advocate a Paleo diet, as Chef Pete does, they do share many similarities – so long as animal protein is not consumed in excess. For example, neither recommend dairy products, although the Program allows fermented dairy, such as plain, organic yogurt.

The bottom line is that there is clear, verifiable data showing that milk and dairy harm your bones. And that data is available for anyone to discover and review, whether they have a medical degree or not!