Coming Down With A Cold? Try These 9 Tips That Won’t Hurt Your Bones - Save Our Bones

Coming Down With A Cold? Try These 9 Tips That Won’t Hurt Your Bones 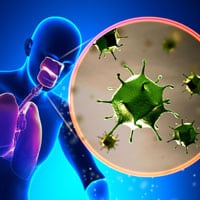 No one has time to be sick, yet it seems like colds and respiratory infections can strike at the worst times. What if you could stop your cold in its tracks? It turns out, you can!

Today’s post covers nine effective all-natural things you can do to overcome a cold or even the flu, so you won’t need to take bone-damaging medicines. At the first sign of a cold, such as a tickle in your throat and nose or a tight feeling in your chest, take a look at the following list. Better yet, take a look at it before you feel those first symptoms.

Flushing out your nose and sinuses can keep the cold virus from taking hold. If you have a neti pot, now is the time to use it. A hot shower and saline nasal spray are also good options. The key is to clear your nasal passages frequently so the virus can’t “settle in” as easily.

2. Use Raw Honey For Cough Syrup

Over-the-counter cough medicines are not only ineffective; they can be harmful. Most of them contain Dextromethorphan (DXM), a synthetic chemical that, when consumed at high doses, can be fatal. DXM directly affects the brain, suppressing the cough reflex at its source. Scary stuff.

Raw honey is not only much safer; it’s alkalizing, delicious, and has antimicrobial qualities that will help keep your cold from setting in. In addition, it’s been shown to be very effective in calming coughs and throat irritation.

In a study published in the prestigious JAMA Pediatrics, buckwheat honey was compared to honey-flavored cough medicines containing DXM and also compared to no treatment at all.

The study points out that:

“In a comparison of honey, DM, and no treatment, parents rated honey most favorably for symptomatic relief of their child's nocturnal cough and sleep difficulty due to upper respiratory tract infection.”1

If it works for children, it stands to reason that it will work for adults! I recommend raw honey because all of its active components are intact, and it includes traces of other beneficial substances. You can take it straight from the jar or stir a heaping teaspoon or two into a mug of hot herbal tea.

When I was a little girl, my mother would give me a glass of orange juice before bed on the rare occasions I felt a cold coming on. The recognition that orange juice – and Vitamin C – are good for colds is not new, but it’s easy to forget this time-honored remedy in the face of so many drugs and other “treatments” available. But the fact is, Vitamin C is a very powerful cold-fighter and immune-booster, and numerous studies support this.

For example, a 2006 study points out that Vitamin C levels in the body decline during infections and under stress.

“Supplementation of vitamin C was found to improve components of the human immune system such as antimicrobial and natural killer cell activities, lymphocyte proliferation, chemotaxis, and delayed-type hypersensitivity.”2

The study goes on to point out that “a large number of randomized controlled intervention trials” show that Vitamin C contributes to symptom relief and shortened duration of “respiratory tract infections, including the common cold.”2

Additionally, a meta-analysis of 53 studies revealed a particular effectiveness of Vitamin C on physically active people in staving off “respiratory symptoms such as cough associated with exercise.”3 The analysis shows a 48% decrease in the incidence of colds among Vitamin C takers who were under heavy physical stress (such as marathon runners and skiers).3

How much Vitamin C should you take? A good place to start is with at least 500 milligrams in addition to your regular daily dose.

And don’t forget that Vitamin C is a Foundation Supplement in the Osteoporosis Reversal Program, so you’ll be helping your bones at the same time.

This is another simple remedy that’s been with us for a while, but is easily overlooked. A teaspoon of sea salt dissolved in an average glass of warm water helps to reduce the swelling and inflammation of a sore throat. It also clears out excess mucous and flushes out viruses and bacteria, which goes hand-in-hand with #1 above.

Back in 1995, Israeli scientists responded to a flu outbreak by conducting a double-blind, placebo-controlled study. Participants given the elderberry extract experienced reduced symptoms after just two days, and a complete cure within six days. The control group, on the other hand, experienced the first reduction of symptoms much later – after nearly six days.4

Fourteen years later, in 2009, scientists in Florida performed an in vitro test on elderberry extract, noting that the flavonoids in elderberry actually bound to those parts of the flu virus that bind it to the host organism, stopping the virus from spreading to other cells in the body.5

Fast-forward to an even more recent study from 2012, where mice were given elderberry extract after being infected with the human flu virus. The resulting enhancement to the mice’s immune systems was remarkable, as was their ability to fight off the infection.6

And there’s more good news about elderberry. It’s a much safer and more effective alternative to cold and flu drugs such as Tamiflu, which has a long list of side effects, many of which (ironically) mimic the flu itself.

The beginning stages of a viral infection is when you’re the most contagious. Yet this is when most people go in to work anyway, not quite sure if they’re really sick or not. Instead of pushing it, take some time off to rest and practice some of these cold-preventative tips. It’s likely you’ll miss less work in the end if you give your body the rest it needs to recover.

In order to rid itself of toxins, your body needs water. When you feel those first cold symptoms, it’s a good idea to increase your fluid intake to help your body fight off the virus. Soups and herbal teas are also helpful, and can contribute their own healing attributes.

8. Keep Up With Your Bone-Healthy Diet

It’s no secret that a well-balanced diet provides your body with the nutrients it needs to fight off pathogens. If you’re following the Osteoporosis Reversal Program, then you have more reasons than ever to keep up with the Program’s pH-balanced plan that includes alkalizing Foundation Foods, chock-full of Foundation Supplements. These vitamins and minerals boost bone health and immunity.

9. Get Some Light Exercise

Just about everyone knows that exercise improves health, and most are aware that it has multiple benefits. But what is rarely mentioned is that exercise can stimulate your immune system by increasing intracellular communication. In addition, exercise increases the formation of bone cells, which in turn generate blood cells that boost immunity.

It seems there is no end to all the variety of benefits exercise has to offer!

If you feel like you’re about to catch a cold or the flu, make sure to keep your exercise light – you’ll be feeling tired most likely, and getting rest is important (as per #6 above). But some simple, non-strenuous exercises are a great way to get your immune system stimulated and your circulation going, which helps remove toxins from your body.

The Densercise™ Epidensity Training System is so customizable that you can make it into a challenging workout or a gentler routine. And it can be done indoors even in limited space, so you can easily add some light moves in to your cold-busting regimen. The Deep Inhale found in the warm-up section and the Pelvic Tilt on page 20 are good examples of moves that would fit a situation where you feel under the weather.

Densercise™ also has a cool-down section with various stretches, all of which would be appropriate when illness strikes.

So this cold and flu season, make sure you include Densercise™ in your list of cold remedies!

4 Zakay-Rones Z, et al. Inhibition of several strains of influenza virus in vitro and reduction of symptoms by an elderberry extract (Sambucus nigra L.) during an outbreak of influenza B Panama, Altern Complement Med, 1(4):361-9, 1995.