Scientifically Proven: Cyanidin In These Fruits Inhibits Osteoclasts, Increases Osteoblasts And Much More! - Save Our Bones

Scientifically Proven: Cyanidin In These Fruits Inhibits Osteoclasts, Increases Osteoblasts And Much More! 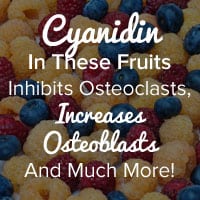 Today you’ll discover that some of the most powerful bone builders are natural substances found in healthful foods. Discovering and learning which nutrients are most effective at building and renewing bone, and then enjoying the foods that contain them, delivers targeted nutrition that is the basis for the Osteoporosis Reversal Program’s drug-free approach.

I’d like to begin by taking a closer look at cyanidin itself, and at the scientific studies about this powerful nutrient.

Cyanidin is a water-soluble pigment that belongs to a class of antioxidants known as anthocyanins. Interestingly, cyanidin’s color varies depending on the acid content of its environment. For example, in a very acidic solution, cyanidin appears red. In more alkaline solutions, it appears blue.

Not surprisingly, the highest concentrations of cyanidin are found in the skins and peels of certain colorful fruits, where it’s joined with sugar molecules to form cyanidin 3-O-beta-Glucoside. We’ll take a look at those fruits soon, because first, I’d like to review…

Why Antioxidants Are Vital For Building Bone

Polyphenols are completely overlooked by the Medical Establishment, yet without them, your bones can’t rejuvenate. Referred to as “undercover bone-builders” in the Osteoporosis Reversal Program, antioxidants like cyanidin protect your bones from the very real damage caused by free radicals (aka reactive oxygen species).

Oxidation is a process not unlike rust, with normal cellular metabolism resulting in the damage of approximately one to two percent of cells. These cells have an unpaired electron, making them free radicals that steal an electron from other cells, rendering them damaged as well.

Antioxidants stop this chain reaction and free up the bones to undergo the remodeling process, which is the key to reversing osteoporosis. Supported by current research, antioxidants cannot be overlooked in the fight against osteoporosis.

When considered alongside additional research, it’s evident that cyanidin’s ability to protect bone mineral density is due in large part to cyanidin’s role in cellular differentiation, which we’re going to take a look at more closely in the following study.

Cyanidin And Bone Remodeling: How It Regulates The Process On A Cellular Level

By activating these pathways, M-CSF and RANKL regulate the expression of osteoclast- and osteoblast-specific genes. Cyanidin plays a key role in this process, as a brand-new study reveals.

Researchers investigated the role of cyanidin “in the differentiation of bone-association cells and its underlying mechanism.”1 They found that in various applications, cyanidin (C3G) reduced and/or inhibited the differentiation and activation of osteoclasts. In addition, an activator effect was observed with regard to osteoblast differentiation. Considering the body of research, scientists concluded that,

“…these results strongly suggest that C3G has a dual role in bone metabolism, as an effective inhibitor of osteoclast differentiation but also as an activator of osteoblast differentiation. Therefore, C3G may be used as a potent preventive or therapeutic agent for bone-related diseases, such as osteoporosis…” 1

The mechanism by which cyanidin does this is by inhibiting a “receptor activator of nuclear factor kappa-B ligand (RANKL)-mediated osteoclast differentiation and formation…and downregulated the expression of osteoclast differentiation marker genes.”1 In other words, cyanidin plays a role in the natural regulation of osteoclasts in the process of bone remodeling, inhibiting a key RANKL receptor at the appropriate time.

The body has to regulate osteoclast activity, or else too much bone would be shed. Amazingly, cyanidin is part of that natural process. But when the pharmaceutical industry produces synthetic drugs that artificially manipulate osteoclast activity – drugs like the popular bisphosphonate alternative, Prolia – then the trouble starts (more on this later.)

Here are the foods with the highest concentrations of cyanidin, many of which are Foundation Foods on the Osteoporosis Reversal Program.

A colorful fruit salad would be a fantastic way to enjoy these cyanidin-rich foods, or as a delicious topping for plain yogurt. And while it’s not a fruit, dark chocolate is a good source of cyanidin; try grating it over fruit or yogurt and discover a delicious way to add to the antioxidant content of the dish.

If you’re following the Program, then you’re familiar with various scrumptious ways to pack antioxidants into your diet, because antioxidants are absolutely crucial for rejuvenating bones.

The Medical Establishment touts Prolia as a “safer” alternative to bisphosphonates. But Prolia is far from safe. It works by mimicking a cytokine called osteoprotegerin, which binds to RANKL and prevents its interaction with RANK receptors on the surface of osteoblast cells. Essentially, it renders osteoclasts inactive.

There, of course, is the problem. For healthy bone remodeling, osteoclasts must be active. The body naturally regulates their activity in the presence of good nutrition, as shown earlier.

That’s not the only problem with Prolia. Its list of side effects is disturbing, including osteonecrosis of the jaw, serious infections of the ears, bladder, or lower abdomen, and an unsettling warning from the manufacturer: it is “unknown” whether the long-term use of Prolia causes slow healing of broken bones or “unusual fractures.”

Instead of relying on the artificial manipulation of prescription drugs, the Osteoporosis Reversal Program makes use of targeted nutrition, among other things, as this post illustrates. It simply means that diet and easy lifestyle changes are all it takes to enjoy youthful, strong bones without risking debilitating side effects.

The only “side effects” from the Osteoporosis Reversal Program are stronger bones, better overall health, and more youthful energy.

Do you have a favorite way to enjoy these cyanidin-rich foods? Did your doctor prescribe Prolia to “heal” your bones? Please share with the community and discuss today’s topic by leaving a comment below.