Elliptical Vs. Treadmill: Which Is Better For Your Bones? - Save Our Bones

Elliptical Vs. Treadmill: Which Is Better For Your Bones? 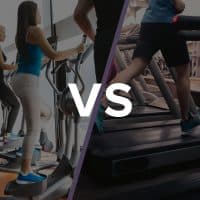 Exercising regularly is essential to building new bone. It’s a foundational part of the Osteoporosis Reversal Program and one of the most important activities Savers use to reduce the risk of falls and fractures.

As we’ve featured here before, running, jogging and walking are all excellent sources of bone- healthy weight-bearing exercise, but some days the weather just won’t allow these activities. If it’s too hot, too cold, or too wet to venture outdoors, you might find yourself with some competing indoor exercise options.

Today we’ll compare the bone health qualifications of treadmills and ellipticals, looking at the science behind how they impact your body. As it turns out, one is better than the other for bone health. Read on to find out which, and why.

What’s The Difference Between Ellipticals and Treadmills?

Both of these exercise machines aim to provide an aerobic workout that burns calories and improves cardiovascular and general health. Both accomplish those goals with flying colors, and are good choices for a workout. But there are some significant differences that you should take into account, especially with regard to bone health. Let’s have a look at what each machine has going for it.

Reasons To Use A Treadmill

Treadmills Are Tried And True – These machines have been around since the 19th century, and they’ve only gotten better and more efficient over time. Their use has been thoroughly researched over the years, so you know what you’re going to get out of this machine.

Natural Movements – You already know how to walk, jog and run, so you know how to move on a treadmill to get the most out of it. The simplicity of the treadmill is a major strength.

Treadmills Burn Calories Fast – When you’re running on a treadmill you’re burning about 400 calories per hour, but it varies with speed, of course. That high rate helps you to keep your calorie input/output balanced, which is good for maintaining a healthy weight and an active lifestyle.

There’s More Than One Way To Treadmill – Variation is important in a workout routine. If you get bored and give up on your exercise practice, or stop putting effort into it, then it’s not going to work. Treadmills have incredible versatility, offering different options for speed, incline, and training programs. Every run can be different, and that helps keep you engaged.

Treadmills Are High Impact – The flip side of the weight-bearing benefits of treadmills is the impact on joints. If you have joint problems such that the impact from running causes you pain or discomfort, you might want to find a different form of weight bearing exercise to take its place. And remember that walking is also bone-healthy, but lower impact, and you can walk on a treadmill too.

Variations In Equipment – Not all treadmills are created equal. Sometimes you might find that the handles make running awkward, or that the width of the belt affects your stride. Or maybe the treadmill available to you doesn’t have some of the features to create a varied running experience. All of these factors might make you less likely to choose this machine.

Running Requires Effort – Because treadmill running is harder than using some other machines, many people are lured to easier workouts, or give up entirely. While it’s certainly better to find an alternative than to remain sedentary, consider the great benefits of treadmills before taking the easy way out.

Ellipticals Are Low Impact – Because your feet never break contact with the pedals of the machine, your joints don’t have to absorb the force of your body striking the ground. This is great news for those who have achy joints.

Full Body Engagement – Ellipticals allow you to engage your entire body, both upper and lower, so you’re getting a workout that strengthens and conditions more than just your legs. You can even stride in reverse on an elliptical, allowing you to work yet another muscle group.

Ellipticals Burn Fewer Calories – Compared to treadmills, ellipticals are slightly inferior at burning calories. However, the difference isn’t very significant, so this isn’t a good reason to rule out ellipticals entirely.

Less Engagement – Because they don’t offer the same array of options for varying your workout, ellipticals are less engaging, which may lead to shorter or skipped sessions. Even if an elliptical does have an incline feature, it won’t be as effective as on a treadmill.

Low Impact- This is the most important shortcoming of ellipticals, and should be the tiebreaker for Savers. While using an elliptical is a weight-bearing exercise, it lacks the impact necessary to stimulate new bone formation. The cardiovascular and calorie-burning benefits of ellipticals are certainly valuable for improving general health, and using an elliptical is better than remaining sedentary. But for those seeking to build bones, the treadmill has more to offer.

The Science Behind The Bone Strengthening Benefits Of The Treadmill

As always, the Save Institute goes a step beyond advising on living a healthier life: we provide the scientific evidence that supports and explains that advice. Let’s have a look at a few studies that examine the relationship between treadmill use and bone health.

The first study is titled “Effects of treadmill exercise on bone mass, bone metabolism, and calciotropic hormones in young growing rats.” Researchers at the Keio University School of Medicine in Tokyo separated 20 rats into four groups of five: A group that exercised for seven weeks, a group that exercised for 11 weeks, and two sedentary control groups, one for each time span. Before and after each exercise period, the scientists tested the rats bone mineral content at the tibia and fifth lumbar spine and measured femoral length and levels of bone markers and calciotropic hormones.

Here is what they found:

This is a great reminder that moderation is a good philosophy since too much of any one thing is never good. Variety is important, both in diet and exercise. Use your treadmill as a part of your workout routine, but be intentional how much you run. Don’t overdo it!

Walking On Your Treadmill Is Equally Valid And Healthful

This study brings us into the realm of research on humans, and opens up the inquiry to the benefits of walking on treadmills. Thai scientists tested bone turnover in a group of postmenopausal women who participated in a three-month program of supervised treadmill walking.

Three times a week for those three months, the eighteen women in the study walked on a treadmill at an intensity of 55-75% of maximal heart rate. Their bone turnover rate was determined by measurements taken before the experiment, at one week, and again after the three-month program. The measurements determined their levels of crosslinked C-terminal telopeptides of type 1 collagen and N-terminal propeptides of type 1 procollagen, both of which are biomarkers of bone formation.4

The test results showed that “bone resorption and formation markers were significantly increased after treadmill walking.”4 By stimulating increased bone turnover, these women built stronger, younger, more resilient bones. And that was measurable after only three months of the routine described above. That’s an incredible (and rigorously scientific) testament to the power you have to make lifestyle changes that will improve your bone health!

It’s Not Too Late To Start Using A Treadmill

The first couple of studies above were on young rats, but this study specifically looks at whether the impacts of treadmill exercise translate to older female rats. Australian scientists conducted studies similar to the rat studies above, but comparing young and old rats on a treadmill running program.

Even though the older rats were starting at a bone density disadvantage due to the effects of aging, both the young and the old saw gains in bone formation rates. Their bone improvement response to treadmill exercise was not dependent on age.5

That means that it’s not too late to start making a difference in the strength and quality of your bones. And you can do it by walking or running outside, or inside, using a treadmill. Remember that these effects do not extend in the same way to elliptical use, because ellipticals don’t offer the same weight bearing exertion. But much like swimming, ellipticals can be a valuable addition to a regimen that includes other forms of weight-bearing exercise.

Any safe and consistent exercise routine is going to offer you health benefits, but as these studies have shown, the details of that routine do make a difference. If you’d like to learn more about how different types of exercise can benefit your bones, and the quality of your life, check out the Osteoporosis Reversal Program. It goes even deeper into the science of bone health and provides a broad, holistic approach to building stronger, more resilient bones through exercise, nutrition, and lifestyle adjustments.