Dirty Vs Clean Alcohol? Which Alcoholic Beverages Should You Avoid And Which Are The Safest - Save Our Bones

Dirty Vs Clean Alcohol? Which Alcoholic Beverages Should You Avoid And Which Are The Safest 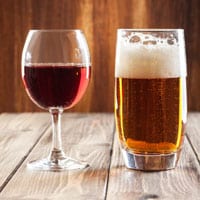 Savers already know that an occasional alcoholic beverage won’t undermine a bone-smart diet or lifestyle. But what is not so well-known is that several popular beers and wines contain toxic ingredients.

Now is a good time to become aware of these harmful toxins – summer celebrations, cookouts, and picnics are in full swing in the Northern Hemisphere, and alcoholic beverages are often served to provide refreshment. And of course, they are popular year-round, so this information is relevant throughout the year as well.

Today you’ll learn which ingredients you should avoid and the drinks that are best for your bones, so the occasional enjoyment of an “adult beverage” won’t add to your toxic load.

But first, there’s an important point I want to address about the acidifying nature of alcohol.

All alcoholic drinks, regardless of the presence of toxic ingredients, are acidifying. However, this does not mean that alcohol is off-limits on the Program. For example, beer contains silicon, and red wine contains the antioxidant resveratrol.

Balance and moderation are far more important concepts to the Program than restricting certain foods, but bear in mind that as you choose healthful options for alcohol, it should still be counted as part of the 20% acidifying foods and drinks on the Program’s 80/20 nutritional plan.

This is why, at the Save Institute, we recommend balancing alcoholic beverages with an alkalizing snack or meal to offset the acidifying effects of the alcohol.

What makes alcohol acidifying? After all, some alcoholic drinks, like wine, are made from grapes, which are alkalizing. But when those grapes are fermented, alcohol – more correctly, ethanol – is produced, and ethanol is acidifying.

Thirty volunteers in “a fasting state” were given ethanol, and blood and urine samples were taken at various intervals after ingestion. Urine pH decreased significantly, particularly at three and seven hours after ingestion. The study scientists concluded that:

Acetaldehyde is the substance produced when your body metabolizes ethanol.
But there are many ingredients in alcoholic beverages besides ethanol, and that’s what I want to share with you next.

Following is a list of toxic ingredients, so you’ll have your own mental “label” to help you make healthful choices.

Conventionally grown grapes are one of the most heavily-sprayed crops (they rank #6 in the EWG’s latest Dirty Dozen list). And wine, like grape juice, is a concentrated form of the fruit, so the amount of pesticide residue will be much greater in a cup of wine than a cup of whole grapes. Unless a wine is labeled “organic,” you can’t be sure that you’re not ingesting bone-damaging pesticides.

A note about organic labeling – pay attention to the wording. If it says “made with organic grapes,” then it may contain more sulfites than if the wine is simply labeled “organic”.

Usually shortened to “sulfites” or “sulphites,” sulfur dioxide occurs naturally to some degree in all wines, in various forms and amounts. But naturally-occurring sulfites are generally in a very low concentration, whereas commercial, mass-produced wines, where every batch must taste the same, may contain significant amounts of sulfites.

Wine manufacturers add sulfur dioxide as a preservative. It makes wine shelf-stable at room temperature, which most people attribute to the wine’s alcohol content. But that’s not why your bottle of wine doesn’t “go bad” when it sits on the countertop during the summer. It’s actually the sulfur dioxide.

How much sulfur dioxide is added varies greatly by brand, quality of grapes, and other factors. Wine makers may add more sulfur dioxide to one batch than another. And therein lies the problem – a wine may have a vague label saying “contains sulfites,” but no reference to the milligrams per liter.

Another factor influences how much sulfite is added to wine. When wine makers add the sulfites, some of the molecules become “bound” to other elements in the wine, rendering the sulfites useless as a preservative. So manufacturers must add enough sulfur dioxide that there will be plenty of “free” sulfites available after binding takes place. For example, wines with a lot of added sugar will likely contain greater amounts of sulfur dioxide, because sugar binds with the sulfite molecules.

Sulfur dioxide can cause allergic reactions, such as skin flushing and headaches, and it can exacerbate asthma.

Many alcoholic drinks, such as vodka are corn-based (corn is rapidly replacing potatoes as the base for vodka), and corn is one of the major GM crops. Other drinks, including beer, may contain not only corn, but corn derivatives like GMO corn syrup.

Animal products are not toxic per se, but the odd animal parts – such as fish bladder (sometimes listed as “isinglass”) – are not necessarily something you’d want to ingest unknowingly. And for vegans, products like gelatin, found in various alcoholic drinks, are off-limits. Those who have ethical concerns about consuming animal products will certainly want to know if there are any such products in whatever food or beverage they’re consuming.

The vague term “natural flavors” denotes any flavoring agent that has a natural source…but the end product may be anything but natural. A good illustration of this is monosodium glutamate, a dubious substance that has been linked to skin rashes, migraines, and even heart irregularities. But if its source is something natural, such as vegetables or fruits, then it can be claimed to be a “natural flavor.”

Consuming a substance in low amounts as it occurs naturally in a food is entirely different than consuming it in high concentrations after it’s been extracted from the food and added to another food or beverage.

Additionally, artificial colors abound in various alcoholic drinks, especially those that are flavored, such as FD&C Yellow #5, FD&C Blue #1, FD&C Red 40, caramel color, and other toxic food dyes are all potential additives.

The container your alcoholic beverage is stored in makes a difference. Most cans contain plastic linings with BPA, and plastic bottles, jugs, and boxed wine containers may also contain it. BPA, or bisphenol A, is a known calcium-blocker that has been linked to birth defects, cancer of the breast and prostate, early puberty, impaired immunity, neurological impairment, and other grave health concerns. Glass bottles are a safe option.

A known carcinogen, arsenic has been found in wines in varying amounts, mainly in wines produced in California, New York, Washington and Oregon. Because arsenic occurs naturally in the soil, the actual levels of this chemical in wine are difficult to pinpoint. Some wines consistently contain more than others, with some containing four and five times the amount allowed by the EPA in drinking water. You may have heard of this because it was widely reported by the media.

Choosing organic wine decreases the chance that it will contain arsenic from grapes that were grown in chemically-fertilized soil (fertilizers often contain arsenic).

Found in the popular beer Corona, propylene glycol (PEG) is known to cause neurological conditions. It may be in other beers, too; the problem, of course, is that there’s no way to know unless the manufacturer chooses to list ingredients.

That brings us to the question of…

When it comes to wine, choose organic whenever possible. If you have access to local wines from smaller wineries, that’s also a viable choice. If those are unobtainable, there’s little harm in drinking wine in moderation, because the study applied the EPA standard of drinking water to wine, which is consumed much more infrequently than water.

The same is true for beer. Organic beers are the healthier choice, but if those are unobtainable, the next best option are beers from small local craft brewers. Also, because of their strict beer purity law, known as Reinheitsgebot, all German beers contain no added chemicals which make them a viable option. Additionally, the following beers are known to be free of the toxic ingredients listed above:

As far as liquor goes, choose organic as well. But if that is not an option, tequila is considered one of the “cleanest” alcoholic beverages, and is generally very low in toxins. Be sure to select tequila that includes some variation of the words “100% agave” on its label.

As you choose which alcoholic beverages to drink, remember to consume them in moderation. The typical recommendation is one five-ounce glass of wine or one 12-ounce beer a day for women and two for men. More than that, and you could run the risk of harming your liver. In fact, even consuming one drink a day within the recommended limits can tax your liver if you’re drinking beverages that contain any of the toxins listed above.

Here’s why this happens. Your liver treats alcohol – more specifically ethanol – like it does fat, so the broken down metabolic by-products get converted into fatty acids by the enzyme alcohol dehydrogenase. The fatty acids are stored in the liver and in other tissues. Additionally, it takes time for the liver to process the alcohol (about 1/3 of an ounce per hour), so drinking a lot at a fast pace can cause significant damage, including the death of liver cells and various alcohol-related diseases, such as:

These and other alcohol-related liver damage can be avoided by drinking in moderation, choosing toxin-free beverages, and periodically cleansing your liver.

Cleanse Your Liver In Just One Week

It only takes one week for OsteoCleanse™, The 7 Day Bone Building Accelerator to free your liver from its toxic load. This helps to jump-start the bone building process, as a functional liver is crucial for bone health. If your liver is damaged or simply not up to par, then toxins will accumulate in your system. These poisons are highly acidifying and accelerate bone loss.

Also, a healthy liver is required for the manufacture and proper performance of bone-building Vitamin D and bone alkaline phosphatase, which aids osteoblasts in their bone-building role.

So to protect your liver and your bones, it’s a good idea to “pamper” your liver periodically. OsteoCleanse™ is an effective way to do just that. Some cleanses require expensive supplements and other specialized products, but OsteoCleanse™ doesn't, and it's a downloadable file that you can conveniently access any time you want to “treat” your liver to a restful cleanse.

So go ahead and enjoy healthful alcoholic beverages in moderation – now you know how to choose the bone-healthiest options.

Get It Free Now
12 comments. Leave Yours Now →