Just Confirmed: This Vitamin And Powerful Antioxidant Keeps Muscles And Bones Strong (Hint: It's Not Vitamin C) - Save Our Bones 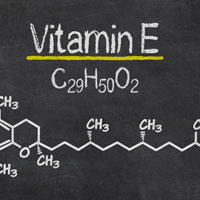 Vitamin E is rarely considered in the fight against osteoporosis. Yet this powerful antioxidant and muscle-builder is an important nutrient for bones.

In today’s post, we explore Vitamin E’s role as an antioxidant and investigate recent research on how Vitamin E keeps muscles (and therefore bones) healthy and strong.

You’ll also learn which foods are highest in Vitamin E. Chances are, you’re already eating some of them because most of them are Foundation Foods.

A good place to begin is to delve into…

Like Vitamin C, Vitamin E has a dual function as an antioxidant and a vitamin. “Vitamin E” refers to eight different fat-soluble nutrients – four tocopherols and four tocotrienols. You’ve surely heard of the high-profile alpha-tocopherol, because it’s been studied most extensively. But researchers are discovering the benefits of the other seven nutrients as well.

For example, gamma-tocopherol is beginning to get attention. While alpha-tocopherol is superior as an antioxidant, gamma-tocopherol appears to be the better anti-inflammatory, making it a more powerful protective against inflammation-associated illnesses such as cancer, arthritis, and cardiovascular disease.1

In addition to its powerful antioxidant and anti-inflammatory effects, new research sheds light on Vitamin E’s role in muscle integrity.

It’s no secret that Vitamin E is good for muscles – body-builders routinely include Vitamin E in their diets. But just how and why this vitamin builds muscle has been unknown until recently.

It turns out that it has to do with the integrity of cellular membranes. You see, every cell in your body has a membrane, and they can and do get torn. But muscle cell membranes habitually get torn simply from use, and must be repaired to function. In the case of muscle cells, the repair of torn cell membranes is the essence of building muscle – muscle must be damaged slightly to strengthen.

Something else happens when muscles are worked during exercise: the energy-creating mitochondria within the cells increase their production of free radicals because they burn more oxygen than when the muscle is at rest. This increase in reactive oxidative species (ROS) can hamper cell membrane repair – unless Vitamin E is present.

Vitamin E is fat soluble, so it can enter the cell membrane itself (which is composed primarily of proteins and lipids), and act as a defense against the damaging effects of free radicals. In addition, Vitamin E facilitates membrane repair by enabling the regenerative action of phospholipids, which are major components of cell membranes.

So Vitamin E works directly on the membranes of muscle cells to speed and enhance healing, making it indispensable for maintaining and building muscle strength and integrity.

Scientists discovered this by dividing rats into three groups and feeding them regular feed, Vitamin E-enhanced feed, or feed without any Vitamin E. The rats, whose muscle integrity had been evaluated beforehand, then had their muscles analyzed after exercise. Those who were deficient in Vitamin E had smaller, inflamed muscles in contrast to the rats who received Vitamin E in their diets.2

What Does This Have To Do With Bone Health?

The answer is, plenty! Strong muscles help build bone as per Wolff’s Law, which states that muscle tension applied on the bone stimulates bone growth. Therefore, while exercise is a vital component to develop fracture-resistant bones, it’s crucial to have muscle-rejuvenating nutrients as well.

It’s interesting to note that the Vitamin E-supplemented feed did not have a better effect on the rats’ muscles than the feed that had Vitamin E naturally in it. That’s significant as we explore the various foods that contain Vitamin E.

Unfortunately, most adults who consume an average diet do not get enough Vitamin E. But the pH-balanced nutritional plan in the Osteoporosis Reversal Program is well above average! So if you’re on the Program, you’re already getting plenty of muscle-protecting, bone-healthy Vitamin E.

Should You Take A Vitamin E Supplement?

It’s not necessary to take a supplement if you’re regularly eating the Foundation Foods listed above. But if you do choose to take one, be aware of the labeling. I’ll explain.

Because of its eightfold nature, Vitamin E is not measured in milligrams. Instead, dosage charts refer to “milligrams of alpha-tocopherol equivalents,” or “mg ATE,” since this form of measurement does not denote which of the eight nutrients were used in determining the dosage.

Another unit of measure you’ll often see on Vitamin E supplements is IUs, or International Units. This measurement system allows supplement manufacturers to “spike” their product with cheaper, widely-available alpha-tocopherol. This skews the ratio of tocopherols to tocotrienols.

So if you choose to take a supplement, a good place to start is with 400IUs a day of mixed tocopherols – gamma, delta, and alpha, with a greater proportion of gamma than alpha. Then you needn’t worry that the IU measurement has been used as a loophole.

In 2007, a study linked Vitamin E supplementation with increased all-cause mortality. But a recent meta-analysis shows that this study, and others like it, are flawed.

Researchers carefully investigated dozens of studies that were published between 1988 and 2009, involving hundreds of thousands of participants. They found that many studies that seemed to correlate Vitamin E with mortality averaged 2.6 years for follow-up time, which is hardly enough to make a connection between mortality and supplementation.

In addition, no compliance data were included in the study results, meaning that those who stuck with the supplementation and those who didn’t were lumped into the same category when results were assessed at follow-up.3

The meta-anlaysis concluded that “supplementation with vitamin E appears neither beneficial nor harmful in terms of mortality.”3

So taking a quality Vitamin E supplement is fine, but it is not necessary if you eat foods from the list above.

Supplements And Exercise Work Together

Savers know that all Foundation Supplements work together to build and rejuvenate bone; no nutrient works in isolation. So eating the right foods is crucial; but the quickest way to restore your bone density as you nourish your bones is to exercise.

The Densercise™ Epidensity Training System targets specific areas that are prone to low density and fracture, such as the hips, lower back, ankles, and wrists. As the name implies, Densercise™ provides the mechanical stimulation that actually influences gene expression that regulates bone density. And the stronger your muscles, the more effective that stimulation will be.

Please feel free to share your thoughts on today’s topic with the community by leaving a comment below.