Leucine: The Amino Acid Scientifically-Proven To Build Your Bones And Your Muscles - Save Our Bones

Leucine: The Amino Acid Scientifically-Proven To Build Your Bones And Your Muscles 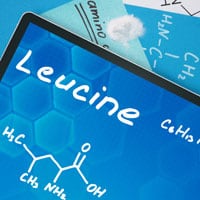 It may surprise you to learn that building muscle is an integral part of growing new bone and reversing osteoporosis and osteopenia. While you may recognize the essentiality of ingesting nutrients and antioxidants that build bone, alkalize the body and reduce inflammation, you may not realize that it’s equally vital to build muscles by exercising and getting enough protein.

That’s right – I’m talking about protein, the nutrient that can cause some confusion among seasoned Savers and newcomers alike. After all, aren’t most protein sources acidifying? Isn’t ingesting protein to build muscle just for bodybuilders?

Today I’d like to clear up some of the confusion about protein (which is composed of amino acids) and delve into the latest scientific research about one of these amino acids, leucine. This remarkable molecule holds particular promise for building muscle (and therefore bone).

I want to begin by answering the question of why strong muscles are so important for reversing bone loss.

Stimulation from muscle is a significant part of the bone remodeling cycle, particularly the modeling aspect. Modeling is the specific adaptation of bone to stimulation via osteogenic loading, or bearing weight.

This phenomenon is explained by a scientific principle known as Wolff’s Law. Julius Wolff first proposed his theory in 1892, claiming that new bone is formed (and essentially changed) in response to the application of muscle tension and gravity. His postulation has been proven true over and over, and is now a widely-accepted scientific law.

Obviously, strong, functional muscles are necessary to exert the appropriate pressure on bone to stimulate its formation. Exercise is the catalyst in building functional muscles and bones, but without the presence of key nutrients, neither type of tissue will respond optimally to exercise. That brings us to the role of protein in a bone-healthy diet.

A Place For Protein

Ample data confirms that your muscles must have protein to build and strengthen. This concept is not just for bodybuilders – it’s for anyone who wants to nourish their bodies to reach optimal health (including bone health).

There are two important aspects of protein ingestion: the timing of intake and the source.

Intriguing research into dietary protein reveals that spreading your protein intake throughout the day is most effective at building muscle. This is contrary to what most Westerners do, which is eating a high-carb breakfast and load up on animal protein at dinner. For more on the topic of timing your protein consumption and a review of the studies, I suggest you read this article: One Minor Tweak To Your Diet Can Make A Major Difference To Your Bones.

The second aspect of protein is the source.

All Proteins Are Not The Same

Savers are well aware that animal protein is acidifying, and while healthful animal-based sources of protein (such as grass-fed beef and free-range chicken) are not off-limits in the Program’s clinical nutrition-based diet, processed meats and excessive animal protein intake are not recommended.

Instead, the Osteoporosis Reversal Program’s nutritional plan points out the presence of protein in a rich variety of foods, many of which are not animal-based. In fact, as I wrote in an article not too long ago, “Amino acids are the building blocks of protein. Your body takes these building blocks from any source and builds a complete protein from them. So not only do you get all the protein you need from a varied, plant-based diet, but you also get all kinds of important bone-building nutrients that you can’t get from animal proteins.” (You can read the rest of the article here.)

We are going to look at one of those amino acids, leucine, next.

Leucine: What It Is And Why Your Bones Need It

Leucine may be new to many of you. This powerful amino acid is necessary for the proper synthesis of protein into muscle tissue. Encouraging research also indicates it promotes longevity. But just what is it?

Leucine is a branched chain amino acid (BCAA), which means its molecular structure includes a central carbon atom that is bound to at least three other carbon atoms. There are three BCAAs: leucine, isoleucine, and valine. BCAAs are known to increase muscle endurance and strength, and animal studies show striking effects of BCAAs, including leucine, on longevity.

Specifically, BCAAs work by inducing the generation of mitochondria, the microscopic energy-producing organelles within cells. This process, referred to as mitochondrial biogenesis, was observed in mice that were given drinking water containing BCAAs.

The BCAA mice lived significantly longer than their non-BCAA-ingesting counterparts – 12% longer, in fact. Since both groups of mice had the same food, body weight, and body fat percentage, the researchers credited the BCAAs with the increased longevity. Additionally, mitochondrial biogenesis was further enhanced by regular exercise, with the BCAA mice performing better on treadmill tests and motor function evaluations.1

The BCAA mice also exhibited genetic defenses that stave off the pro-aging effects of free radicals,1 shedding light on yet another mechanism by which BCAAs increase lifespan.

Leucine And Your Bones

Out of the three BCAAs, leucine is considered the one directly responsible for muscle tissue synthesis, and it shows promise as a preventer of age-related muscle atrophy. Leucine increases cellular energy by stimulating the production of protein in skeletal muscle tissue, making leucine intake especially important as we age.

The recommended daily allowance (RDA) for leucine is 2730mg daily for a 150-pound adult. Getting plenty of leucine is simple if you’re following the Program; many of the following seven leucine-rich foods are Foundation Foods.

All sorts of delicious nuts and seeds are high in leucine. Pumpkin seeds are the richest source, containing around 677mg per ounce (about 3 tablespoons), or 25% of the RDA. They are followed by sunflower seeds, which offer 17%, sesame seeds and almonds (15%), and flax seeds and cashews (13%).

Just three ounces of tuna contain 1949mg of leucine – that’s 71% of the RDA. Salmon, snapper, trout, mackerel, and halibut have around 65% of the RDA per three ounces, with salmon topping the list at 69%.

For information on the safest fish to eat and what fish to avoid due to toxicity and other concerns, please review the following article: The 7 Most Toxic Fish You Should Avoid To Protect Your Bones And Your Health (And Which You Should Eat Instead).

Crustaceans such as lobster and shrimp rank fairly high on the leucine scale. Three ounces of lobster offer 65% of the RDA, with shrimp, crab, clams, and mussels ranging from 61% to 52% per three ounces.

In the U.S., cheese typically comes in eight-ounce blocks or wedges. Parmesan cheese is the richest source of leucine, with one ounce (an eighth of a block or wedge) providing 3452mg, a whopping 126% of the RDA! Other cheeses, including Romano, Swiss, Fontina, hard goat cheese, and gouda offer around 30% per ounce.

This American favorite is yet another legume relatively high in leucine. An ounce of peanuts (about 3 tablespoons) will provide about 507mg, or 19% of your daily leucine. Peanut butter, not surprisingly, is a concentrated source of leucine – half a cup will give you 73%.

If you picture a deck of cards, that’s just about the size of a three-ounce piece of beef, poultry, or pork. Beef is the richest source of leucine, with three ounces of lean steak providing 2690mg – almost 100% of the RDA. Venison and lamb provide about 85%, ground turkey 81%, and chicken wings and drumsticks around 71%.

But Most Of These Foods Are Acidifying!

Yes, it’s true that with the exception of some of the nuts and seeds listed above, these seven foods are acidifying. But remember, the Program’s 80/20 pH-balanced nutrition plan allows for 20% of your daily foods to be acidifying. Because these seven foods do not need to be eaten in large quantities to provide plenty of leucine, they can easily be incorporated into that 20%.

If you need ideas on how to prepare leucine-rich meals and dishes, then you’ll enjoy preparing meals with Bone Appétit. The convenient digital format enables you to do a lightning-fast search for any ingredient, nutrient, category, recipe name, etc. you like. So you can put together a day’s worth of high-leucine meals and snacks in minutes!

Of course, you can also find tips and ideas for preparing dishes high in other nutrients, too; all recipes in Bone Appétit are composed of bone-smart ingredients and Foundation Foods for optimal bone renewal with every bite.

With Bone Appétit, you’ll never have to worry about getting enough nutritious food to build your muscles and your bones.