Lysine: The Essential Amino Acid That Builds Collagen And So Much More - Save Our Bones

Lysine: The Essential Amino Acid That Builds Collagen And So Much More 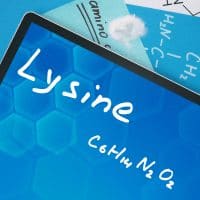 Lysine is an essential amino acid, necessary for many functions in the body. The word essential indicates that it is one of the nine amino acids that we need, but since we can’t synthesize it, we must obtain it from the foods we eat.

Lysine can also be considered essential because it performs many other important biological functions. It’s necessary for collagen production, for calcium absorption, has been scientifically shown to reduce stress, and more.

Savers will note that these three functions play an important role in bone health. Read on to learn about lysine’s benefits, and how to get enough of this amino acid in your pH-balanced diet.

Now let’s take an in-depth look at the bone health benefits of lysine.

In several studies, lysine has been shown to reduce stress levels.1,2,3

In two separate studies with human participants, lysine was found to reduce levels of the stress hormone cortisol. One study assessed the effect of one week of lysine supplementation among 180 Japanese adults.2 The other was a 3-month randomized, double-blind study testing whether lysine fortification of wheat would reduce anxiety and stress response in poor Syrian communities.3 Both studies found lysine to be effective at lowering anxiety and reducing cortisol levels.

High cortisol levels have been directly linked to reduced bone density and a host of other negative health effects.4

Lysine has been shown to reduce anxiety and levels of the stress hormone cortisol. The latter, chronically present in higher-than-normal levels, damages bones.

Calcium is the primary building block of bone. The ability to effectively absorb calcium via digestion, and to then retain it for use in new bone formation is essential for reversing and preventing osteoporosis.

Studies have shown that lysine supplementation both increased intestinal calcium absorption and decreased urinary loss of the mineral.9,10

Researchers demonstrated the bone-building power of lysine in a study that examined the impact of the amino acid on fracture healing in rabbits. In the test group that received the lysine supplements, the time of healing was reduced by two weeks.11

Lysine Is Necessary For Collagen Production

Lysine is required for the production of collagen, which makes up almost a third of our skin, bone, and connective tissue. The bone matrix is comprised of about 40% organic components, 90% of which is collagen.12

Without lysine, you can’t produce the collagen that makes bone tough and flexible.

Lysine directly contributes to bone formation by enabling the production of collagen.

In addition to the bone health benefits of lysine described above, the amino acid contributes to overall health in several other ways:

Cold sores or fever blisters, often appearing on the lips or around the mouth, are caused by the herpes simplex virus type 1 (HSV-1), a virus carried by about 65% of Americans.5 Lysine has been shown to prevent HSV-1 from replicating and to reduce the duration of cold sores.6,7

In one study with participants who regularly develop cold sores, a daily supplement of 1,000 mg of lysine reduced the number of cold sore breakouts.8 Researchers suspect that lysine has this effect because it blocks another amino acid, arginine, which HSV-1 utilizes to multiply.

Lysine has been shown to reduce the occurrence of cold sore outbreaks, and reduce their duration.

How To Make Lysine Part Of Your pH-Balanced Diet

Lysine must be obtained from the foods we eat since our bodies can’t produce it.

While lysine helps to alkalize the serum pH through calcium absorption and retention, its richest sources are acidifying animal proteins. Most meats, seafood, and dairy products are rich sources of lysine. If you choose to include animal products as part of the 20% of acidifying foods in your pH-balanced diet, then you’re almost certainly getting enough lysine.

There are also plenty of vegetarian sources of lysine, some of which are alkalizing:

Lysine For A Healthier Life

Incorporate these foods into your diet to ensure that you’re getting the lysine your body needs to produce collagen, absorb and retain calcium, and build strong and fracture-resistant bones.

1 Smriga, Miro and Kunio Torii. “L-Lysine acts like a partial serotonin receptor 4 antagonist and inhibits serotonin-mediated intestinal pathologies and anxiety in rats” Proceedings of the National Academy of Sciences of the United States of America vol. 100,26 (2003): 15370-5. Web. https://www.ncbi.nlm.nih.gov/pmc/articles/PMC307574/