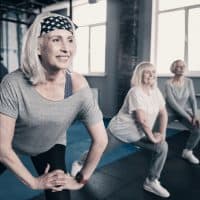 It is well known that exercise has a plethora of health benefits. In addition to strengthening bones, regular exercise has been shown to boost the immune system, enhance sleep, and ward off age-related diseases, such as dementia.

While the research is conclusive that exercise halts and even reverses aging, the biological mechanisms behind the process are only beginning to be discovered. What’s more, there is scant research on which type of exercise impacts our bodies at the cellular level.

Today we share with you new research that addresses just that. Mayo Clinic scientists have discovered that exercise, and in particular high-intensity interval training (HIIT) applied to aerobic activities such as walking or swimming, encourages cells to produce more proteins to feed energy-producing mitochondria, thus halting the aging process at the cellular level.

Study Confirms The Effect of HIIT On Mitochondria

Researchers at the Mayo Clinic conducted a study that included 36 men and 36 women.1 The participants were split into two distinct age groups. While the “young” group consisted of individuals aged 18 to 30 years old, the “older” group ranged in age between 65 to 80 years old. Then, the volunteers were randomized to one of three groups that would attend a 12-week supervised exercise program.

Study subjects in the first group performed high-intensity interval training (HIIT) on a stationary bike three days a week, and two days walking on a moderately difficult treadmill, for a total of five days a week of exercise. A second group did upper and lower body strength training with weights four days a week. Finally, the third cohort combined both strength training and interval training, albeit less intense than the first group, five days per week.

In addition to measuring various aspects of each participant’s physiology, such as body mass index (BMI) and insulin sensitivity, the researchers took biopsies of the volunteer’s thigh muscles and compared them to a control group of sedentary volunteers.

The researchers discovered that while strength training was most effective at building muscle mass, high-intensity interval training had the most significant effect at the cellular level.

More specifically, the high-intensity interval training impacted the cell’s mitochondria. Mitochondria are organelles within a cell that are responsible for the production of adenosine triphosphate (ATP), a source of energy our cells need to perform their functions. As the human body ages, the ability for the cells to generate energy naturally decreases.

While it was clear that interval training was beneficial, this type of exercise provided such impressive benefits because it increases RNA production. This, in turn, increases cellular production of mitochondrial proteins, as well as the proteins responsible for muscle growth. Further, ribosomes, the key components in the synthesis of proteins, improved their ability to build mitochondrial proteins.

What Does Other Research Say About Aging and Exercise?

The Mayo Clinic study is the not the first of its kind to delve into the relationship between exercise and cellular aging. In a study of nearly 6,000 adults, researchers from Brigham and Young University found that adults with a high level of physical activity had cells that appeared nine years younger than their sedentary counterparts.2

The study found that exercise prevents the shortening of telomeres, the DNA that caps each end of a chromosome and protects it from damage. Telomeres, which naturally shorten as we age, are associated with our biological clocks. According to researchers, the shortest telomeres were found in individuals who were sedentary.

Is High-Intensity Interval Training As Complex As It Sounds?

There is no doubt that any amount or type exercise has positive effects on the body, but this latest study appears to point to one particular type of activity: High-intensity interval training or HIIT.

High-intensity interval training is all the rage these days, and HIIT classes are popping up at gyms everywhere. Now, before you are scared off by this complicated-sounding exercise, you should know that you may already be incorporating HIIT into your workout routine.HIIT involves alternating short bursts of intense aerobic exercise with less intense recovery periods.

The great thing about HIIT is that you can easily incorporate it into your everyday training practice. Take, for example, one of our favorite bone-building exercises here at the Save Institute: walking. By simply speed-walking for two minutes, followed by walking at a moderate pace for one minute, you are doing a HIIT workout. In a previous article, I explain how I often alternate running with walking, which is another way to reap the HIIT rewards.

Exercise is crucial for generating more mitochondria and for building your bones. With the Densercise™ Epidensity Training System you can to turn on the “switch” that powers the creation of more bone. Click here to learn more about this bone-building, posture and balance-improving breakthrough method.