How To Stop Mitochondrial Dysfunction: The Silent Bone Killer - Save Our Bones

How To Stop Mitochondrial Dysfunction: The Silent Bone Killer 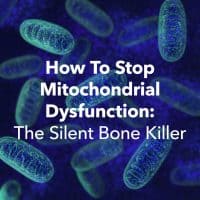 Mitochondria are the power stations of the body. Present in just about every type of human cell, including bone, their optimal performance is linked to overall health and longevity. Not surprisingly, your bones are also impacted by mitochondrial health.

Today we’ll dive into cell biology to gain an understanding of the function, and potential dysfunction, of mitochondria. We’ll cite several studies that confirm the effects of mitochondrial dysfunction on aging, health, and specifically on bone density. Then you’ll learn about a compound that works to facilitate and increase mitochondrial synthesis, and how it can improve your bone health and overall health.

A mitochondrion is a double membrane-bound organelle (a subunit of a cell), common to almost all eukaryotic organisms, which are organisms composed of cells that contain a nucleus and other organelles bound by membranes.

Mitochondria are essentially the digestive system of the cell, transforming carbohydrates and fatty acids into adenosine triphosphate or ATP. The latter is an energy-carrying molecule that cells need to perform their functions. ATP powers the beating of your heart, your lungs’ exchange of gases, the muscle contractions that allow you to move and support your own weight, even the firing of neurons in your brain. None of that could happen without mitochondria producing ATP. Other mitochondrial functions include:

The only human cells that don’t contain mitochondria are red blood cells. Every other cell in your body uses these tiny power generators, though different types of cells contain different quantities. Muscle cells contain the most mitochondria since muscle contraction requires massive amounts of ATP.

The mitochondria within your cells can self-replicate. This is called mitochondrial biogenesis. They possess this unique ability due to their evolutionary history. Mitochondria began as independent cellular life forms that had their own sets of DNA (called mtDNA) and the ability to replicate. Then they developed endosymbiotic relationships with proteobacteria, living inside of these bacteria to gather the nutrients they needed to survive. The bacteria in return received the ATP that mitochondria produce.

While millions of years of evolution have complicated and varied the relationship between cells and mitochondria, they have retained this ability to replicate inside of the cell. Mitochondrial biogenesis was first observed in the 1960s by biologist John Holloszy when he discovered that physical endurance training-induced higher mitochondrial levels.1

When your cells are instructed to use more energy than they can produce, they respond by increasing their capacity to produce energy. This is analogous to the process by which weight bearing exercise exerts a force on your bones, triggering new bone formation. The body is remarkably well equipped to adapt and grow stronger if you provide the right stimulus and the necessary components.

The reverse, however, is also true. A sedentary life doesn’t require as much ATP production, so muscle cells will reduce the number of mitochondria they contain, thereby diminishing your physical strength. Underused mitochondria in other cells suffer the same losses, and just as your body needs certain nutrients to build bone, it needs specific substances to repair and replicate mitochondria.

The Health Impacts Of Mitochondrial Dysfunction

The aging process has been linked to a reduction in number and function of mitochondria. As we age, mitochondria deteriorate and lose their optimal capacity for biosynthesis, ion transport, and oxidative phosphorylation. When the power generators of the cells in any body tissue slow or cease, its functionality is reduced. This applies to the brain, the cardiovascular system, muscles, and bones.

Failing mitochondria also produce excessive and aberrant reactive oxygen species (ROS) that cause further harm inside cells, leading to oxidative damage that affects nucleic acids, proteins and lipids. As mitochondria age, fail and produce more ROS, the damage caused by those ROS to cells throughout the body is a driving force of aging. Indeed, studies have shown an inverse relationship between mitochondrial ROS production and lifespan in mammals. The more functional and plentiful your mitochondria are, the longer and healthier your life will be.2

Several health conditions are associated with mitochondrial dysfunction, either as a cause or a contributing factor:

Mitochondrial dysfunction plays a role in osteoporosis, as shown below:

Clearly, mitochondrial health is imperative to conquering osteoporosis and providing our bodies with the necessary tools to produce strong, flexible bones.

How To Keep Your Mitochondria Healthy

A study, published in 2006, followed eight elderly volunteers (three women and five men) during a 12-week exercise-training program, in which they completed four to six exercise sessions a week, at least three of which were supervised. The activities included using treadmills, stationary bicycles and outdoor walking, increasing the intensity of the activities over the course of the program.

Before and after the program the subjects had a percutaneous muscle biopsy, a physical fitness test, and a blood sample during fasting conditions to determine markers of insulin resistance. The biopsy was used to examine the mitochondria in the subjects’ skeletal muscle. The results showed that routine exercise created a robust increase in mtDNA and mitochondria, as well as a correlated increase in mitochondrial function.

This research underscores what Savers already know, exercise is an essential prerequisite for increasing bone density and quality. An increase in the quantity and quality of mitochondria is yet another benefit of regular exercise.

Coenzyme Q10 (CoQ10) is an antioxidant present in all eukaryotic cells, primarily in the mitochondria. It is a key component of the mitochondrial electron transport train that produces ATP.

As an antioxidant, it protects from free radical damage, which is particularly valuable in the mitochondria, where ROS are a bi-product of ATP generation. CoQ10 also increases the absorption of other essential nutrients, recycles Vitamin C and Vitamin E and assists enzymes to properly digest food.

CoQ10 is synthesized in the body, but as we age, its production declines. We have two important tools for increasing our CoQ10 levels: diet and supplements. Combined, they have the potential to combat mitochondrial dysfunction and support the health of our bones, heart, brain, and more.

The following foods are good sources of CoQ10:

How To Ensure You Get Enough CoQ10

While the above foods provide a measure of CoQ10, a high-quality CoQ10 supplement can ensure that you’re getting adequate levels for your mitochondria to thrive. This is especially important for anyone who has taken statins or bisphosphonates, as both of these drugs deplete CoQ10 levels. In these cases, a supplement is essential to restore optimal levels and counter the effects of the drugs.

Not every supplement is created equal, and you should be vigilant about making sure that supplements you take have been certified as dose-accurate and safe. TrueCoQ10™ from NatureCity is an exceptional supplement that provides the most bioavailable form of CoQ10: ubiquinol. And TrueCoQ10™ contains the Kaneka QH™ brand of ubiquinol, which is the “active” form of CoQ10 and accounts for about 90% of the CoQ10 used by the body.

Until recently, the only form of CoQ10 that was available as a supplement was ubiquinone, the oxidized state of the compound. But due to improvements in production technology TrueCoQ10™ is made with CoQH-CF™ technology which protects the ubiquinol from crystalizing (aiding absorption) and oxidizing (maintaining potency). It has been shown to be eight times more effective than ubiquinone at raising blood levels of CoQ10.9

Our friends at NatureCity have offered a special 20% off coupon exclusively for Savers who want to improve their mitochondrial health and bolster their bones with this powerful antioxidant.

THE SAVE INSTITUTE RECOMMENDS:

TrueCoQ10™ is an excellent tool for fighting the effects of aging and building stronger more resilient bones.