The Amazing Tea That Builds Your Bones And Much More 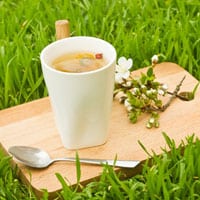 There are few things more heavenly than the scent of hot lemongrass tea. It’s delicious iced, too, and you might be surprised to learn that drinking lemongrass tea goes well beyond its taste and aroma.

It has an amazing number of health benefits, both for your bones and overall health, all backed by scientific research.

So if you have it on hand, go ahead and grab a cup of lemongrass tea and enjoy today’s post on this fragrant topic!

Some Facts About Lemongrass

Lemongrass is one of the “lemon herbs,” an unofficial class of herbs that gardeners and herbalists like to group together for their lemony scent. But while they produce similar scents from shared compounds such as citral, herbs like lemon verbena, lemon thyme, and lemon balm are distinct from each other and from lemongrass.

Lemongrass (Cymbopogon citratus) has long, grass-like leaves reminiscent of sea grasses. It’s native to India and the tropical regions of Asia, and it can grow up to nine feet tall. When grown in temperate regions, it typically stays under five feet. Lemongrass is commonly used in the cuisines of East Asian countries, such as Cambodia, Vietnam, and Thailand.

When used in stir-fries and salads, the bottom few inches of the grass are used. For brewing tea, as we’re going to discuss today, the main stalk is used, crushed with the side of a large knife and cut into one- to two-inch pieces. And it’s also available in convenient tea bags, of course.

As we explore the health benefits of this delicious tea, I’d like to begin with the specific ways that lemongrass, which is alkalizing, is good for your bones.

Did you know that quality sleep is important for your bone health? A great deal of bone remodeling takes place during sleep, and if you’re not sleeping well, your bones can suffer for it. Lemongrass tea can help you get the bone-building sleep you need, as noted in the following study.

When lemongrass essential oil was given to mice, researchers found an increase in sleeping time as well as an anticonvulsive effect on induced seizures.

The study, which refers to the folk use of lemongrass over the centuries, concludes that:

“Our results are in accord with the ethnopharmacological use of Cymbopogon citrates.”1

The study ends with the charge to assess lemongrass for its anti-anxiety, sedative, and anticonvulsant effects.

A cup of lemongrass tea between dinner and bedtime may be just the thing to help you sleep. In addition, alkalizing lemongrass helps you to avoid sleeping pills, which are not only acidifying, but have their own extensive lists of dangerous side effects.

And finally, lemongrass is full of potassium, which helps in the muscle relaxation process that makes for quality sleep.

Lemongrass tea contains antioxidants that scavenge for free radicals, protecting your bones from oxidative damage. Scientists measured the effects of lemongrass on free radicals in a 2005 study, identifying at least eight antioxidant components that had a significant antioxidant effect.2

Chances are your doctor never mentioned antioxidants when he or she discussed osteoporosis with you. But the research continues to back up the connection between antioxidants and bone health, and lemongrass tea is a fantastic way to add more of these important substances to your diet.

Lemongrass has anti-inflammatory, analgesic properties. Its sedative effect, noted above, plays into its ability to relax muscles and ease spasms. In addition, lemongrass eases joint pain through the inhibition of cyclooxygenase-2 (COX-2), an enzyme that is involved in the inflammatory process. It’s known to cause pain, particularly in the joints.

A 2010 study confirmed lemongrass’ ability to suppress this pain-causing enzyme, shedding light on the mechanism by which lemongrass accomplishes this, confirming that:

The study goes on to point out that citral, a key component of lemongrass, is “a major component in the suppression of COX-2 expression…”3

Keeping COX-2 from “running amok” is a very important aspect in relieving joint pain. That’s why drugs for arthritis, rheumatism, gout, and other joint conditions contain COX-2 inhibitors. But NSAIDs damage bone and can have disastrous side effects, while lemongrass avoids all of that. Not only is it alkalizing, but it has an excellent safety record.

And as you’ll read next, lemongrass’ benefits go beyond bone health.

This remarkable herb has benefits for your whole body. It even has anti-cancer effects.

A water extract of fresh lemongrass leaves was found to lower the fasting glucose level of rats who were fed the extract, and it also lowered lipoproteins (low and very low density), and triglycerides. Researchers noted that the study confirms lemongrass’ “folkloric use and safety in suspected Type 2 diabetic patients.”4

This herb also has been shown to lower cholesterol. Lemongrass has such a stellar safety record that human trials can be performed, such as this one where 140mg capsules of lemongrass oil were given to a small group of people for 90 days. The participants were put into two groups, and their cholesterol levels checked at 30, 60, and 90 days. The lemongrass group showed distinctly lower cholesterol levels than the control group, with a progressively greater benefit after each test.5

Lemongrass shows promising anti-cancer properties, rooted in its ability to stop cellular mutations. Both in vivo and in vitro studies have shown that lemongrass staves off cancer.

One study investigated the antimutagenic activity of lemongrass against chemically-induced mutations in various strains of Salmonella bacteria, and the results clearly showed inhibition of eight different mutagenic factors.6

“…inhibits the release of activated aglycon, methylazoxymethanol, from a glucuronide conjugate in the colon, and decreases the DNA adducts and ACF formation in the rat colon.”7

DNA adducts are bits of RNA that have bonded ionically to a carcinogen, and are considered precancerous cells. ACF, or aberrant crypt foci, are abnormal, tube-like structures that line the colon and rectum, and they are also considered an early indication of cancer.

Additionally, lemongrass shows promise in skin cancer prevention. Specifically, the citral in lemongrass was shown to induce the production of GST, or glutathione S-transferase, one of a group of enzymes that has a unique ability as far as the formation of glutathione (the Master Antioxidant) goes. After donating a free radical, glutathione is then conjugated by GST into a detoxifying substance once again.

Researchers studied this fascinating aspect of lemongrass on mouse skin, revealing the citral-induced antioxidant role of GST and “a new insight into skin cancer prevention.”8

While some of the studies used lemongrass extract, the point of the studies is the identification of active constituents in lemongrass, and their mechanism of action. Drinking lemongrass tea is clearly a healthy thing to do, both for your bones and your whole body.

If you decide to make your own lemongrass tea, there may be some confusion regarding citronella, a popular, natural mosquito repellent. Citronella can be derived from lemongrass, or it could refer to a separate plant altogether (Cymbopogon nardus). So for tea-drinking, make sure you get lemongrass (Cymbopogon citrates).

The Simplicity Of A Cup Of Tea

I love how simple and pleasurable it is to apply evidence-backed principles of natural health. From brewing a cup of tea to knowing which foods to eat and to avoid, and so much more.

But the Medical Establishment wants you to believe that reversing bone loss and staying healthy is impossible without drugs and other complicated factors; they make it out to be a complex “monster” when really, osteoporosis is a physical manifestation of a systemic imbalance.

Lemongrass tea is just one of many simple but highly effective steps you can take to regain your bone density. If you haven’t read through the Osteoporosis Reversal Program yet, then you may not know that the data-based premise behind the Program is really simple and easy to comprehend.

While Save Our Bones is a lifestyle, nutrition, and exercise program, balancing the pH of your daily food intake, exercising regularly, and looking at bone health with a fresh approach are simple actions that anyone can do.