The One Reason Why It’s OK To Not Exercise For Your Bones During The Holiday Season - https://saveourbones.com 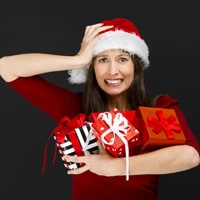 I love the holiday season, but there’s no question that it gets busy and even stressful this time of year. Combined with family and friends visiting from out-of-state, I sometimes allow my exercise routine to lapse in December.

The good news is, I don’t need to add working out to my list of holiday stresses, and neither do you – and that's because I invest in my bone health ‘deposit account'. More on this ‘deposit account' later, but first let's explore muscle memory.

It turns out that a phenomenon called muscle memory stays with us even when we’re not able to exercise for a time, meaning our body is “ready” as soon as we're ready to get back into the swing of things.

When you learned to ride a bicycle, you were probably told that you would never forget how to do it. There’s a fascinating mechanism scientists call muscle memory that explains this.

Here’s what happens: when you engage in movement of any kind, your brain communicates with your muscles along neural pathways. Your muscles, joints, and tendons have sensors called proprioceptors, and these send messages back along the pathways to your brain. It’s a nerve and muscle give-and-take that you don’t have to think about consciously, but it keeps you aware of where you are in space and tells your muscles what movement needs to happen next.

Even if you take a long break from a particular exercise or movement, your brain will remember the pathways, and you will be able to pick up the exercise again with little trouble. And the more you use these pathways, the more ingrained your muscle memory gets.

That’s muscle memory in a nutshell, but some compelling new research reveals another astonishing facet of this process.

Something was apparently happening in the muscle fibers themselves, and researchers now have a good understanding of what it is.

How Do Muscles Remember?

All cells have a nucleus, but muscle cells often have more than one nucleus due to their size and complexity. The nuclei contain the genetic blueprint for making more muscle cells, so their presence and number is pivotal in the body’s ability to retain muscle memory.

When researchers studied the muscles of mice that were put on an exercise regimen, they observed an astonishing increase in muscle cell nuclei as the muscle fibers grew. But even more amazing is this: the number of muscle cell nuclei did not decrease when the mice stopped exercising and their muscles shrank.2

Previously, it was assumed that muscle nuclei did decrease, because the nuclei of surrounding connective tissue do actually decrease in number during periods of detraining. But muscles apparently have a mind of their own!

As I mentioned above, cell nuclei contain genetic information that is required to make more muscle. These nuclei apparently wait for reactivation via exercise for months or even years, ready with their genetic information to build muscle back rapidly…more rapidly than in those individuals who have not exercised in the past and thus have to start with fewer nuclei.
The more you exercise, then, the more you are making a “genetic deposit” into your health “account.” This is especially important if you want to stave off the tendency to build muscle more slowly as you age.

Additionally, all the myriad benefits of exercise, such as increased immunity, longevity, and improved mood, are also “banked” for the future when you engage in a healthy exercise routine.

The Densercise™ Epidensity Training System recognizes the genetic component of exercise, tapping into the role of exercise in influencing gene expression. Densercise™ balances repetition and variety, which is vital – while repetition is important in building muscle memory, research shows that it is also crucial to…

Keep Your Muscles Guessing To Build Your Bones More Efficiently

When you repeat the same movements over and over day after day without any variation, it can cause muscle fatigue and even nerve damage. Plus, too much repetition can make your exercise routine too easy; a bit of a challenge is very important to get the results you want. Plus adding variety helps keep up your motivation.

Another term for this is “muscle confusion,” and it’s actually quite beneficial. Changing up your workout means targeting different muscle groups, giving some muscles time to rest and build while you work other muscles. It encourages your muscles to adapt, change, and strengthen in response to varied moves.

Densercise™ Applies The Principles of Epigenetics And Muscle Confusion

The Densercise™ Epidensity Training System gives you a complete workout for a full four weeks that takes just 15 minutes a day, three days a week. You’ll never do the same exercise for one full month, so your muscles are challenged to adapt and strengthen.

Based on Wolff’s Law, which states that pressure from muscle and gravity stimulates the formation of new bone, Densercise™ offers a variety of movements that build bone density all over, with a particular emphasis on fracture-prone areas like the wrist, hips, and ankles.

Exercise Is Crucial To Build Your Bones And Muscle Memory

The research is clear: to build muscle memory, you need to get started with an exercise program – the sooner, the better. And there’s no time like the present!

I would like to invite you to check out Densercise™ by clicking here.