The Revelatory Link Between Coral Reefs, Your Bones, And Acidification - Save Our Bones

The Revelatory Link Between Coral Reefs, Your Bones, And Acidification 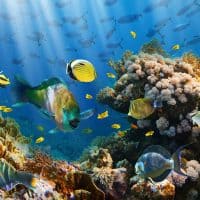 A brand new report confirms marine biologists' long-held theory that coral reefs are developing “osteoporosis” as a result of ocean acidification. While the gradual weakening of the reefs' skeletons has been evident for decades, new science has made it possible to observe why and how acidification is the cause.

Today, we'll give you the details of that study and compare it with a study on balancing the pH in the human body as it relates to diet and bone health.

Together, they reconfirm the science behind the Osteoporosis Reversal Program and draw a curious parallel between our bodies and the planet's oceans.

What Is Ocean Acidification?

The ocean has a pH, just like any water-based fluid, which describes how acidic or how alkaline that fluid is. The pH of the oceans is influenced by many factors, as you might guess, considering the vast amount of the planet they cover. One of those factors is global carbon dioxide emissions, which the oceans absorb.

Since the pre-industrial era, the drastic increase in CO2 emissions has caused an average 0.1 unit decline in seawater pH.1 Lower pH numbers indicate a more acidic solution, which means that the oceans are more acidic now than they once were.

When the oceans absorb carbon dioxide they become more acidic, lowering the pH. As CO2 emissions have risen, the oceans have grown more acidic.

The Impact Of Ocean Acidification

The most immediate and measurable effect of ocean acidification is the concentration of calcium carbonate ions in seawater. These ions are essential for ocean organisms that rely on calcium carbonate for their skeletons. Coral is one of those organisms.

That seemingly small 0.1 unit acidification of the ocean has caused a 20 percent decrease in the concentration of calcium carbonate ions. As a result, life forms like coral have been less able to form healthy and strong skeletons.1

Scientists have more than a century of data showing the density of coral reef skeletons. Archives date back to 1871 for certain reefs in the Indo-Pacific ocean, showing that coral is suffering a loss of skeletal density.

Scientists have previously struggled to prove that acidification was causing the skeletal loss and the resulting weakening of the reefs. However, new research led by Weifu Guo and Anne Cohen has combined that archival data with new examinations of coral in different locations to show that ocean acidification caused a significant decline in coral skeletal density in the Great Barrier Reef and the South China Sea starting around 1950.1

In areas with less pollution and overfishing– factors that increase localized acidification– they did not find comparable losses in skeletal density. This research methodology creates new possibilities for studying the relationship between global warming and ocean acidification so that changes can be made to protect coral.

Acid Balance In The Body

Just like the ocean, the fluids in your body have a pH that can be altered by various factors, including exposure to high concentrations of carbon dioxide.2 That's why the Save Institute recommends sleeping in well-ventilated rooms.

A much more prevalent source of acidification in the human body is diet. Modern Western diets in particular, include large amounts of acidifying foods, especially excessive amounts of animal protein. When you consume an acidifying diet, your body must respond to rebalance your pH, and it has multiple systems to buffer and titrate acid.3

One of those is the renal system, which utilizes your kidneys to excrete acid. The kidneys are your body's first line of defense against acidification, but there are also back-up systems in place.3

Bones are composed of alkaline minerals, including calcium. Once the alkaline bicarbonate reserves are depleted, your body pulls calcium from bones to alkalize its pH, helping the kidneys to create a desirable pH. The result of this secondary system on your bones mirrors the effects of ocean acidification on coral reefs: bone loss.

The body must maintain an alkaline pH. A diet with excessive amounts of acidifying foods forces the rebalancing of its pH. The renal system uses the kidneys to excrete acid, but if that system can't accomplish the goal, the body will pull alkalizing minerals from the bones, resulting in bone loss.

As we get older, certain bodily systems become less efficient. Unfortunately, one of those is the renal system. As kidney function declines, so does our ability to maintain the high level of acid excretion required to offset the acidification caused by a Western-style diet.3

Since our kidneys can't keep up, our body maintains its alkaline pH by the next most effective means: utilizing the alkalizing minerals in our bones.4

Aging is natural. Even though our kidneys grow less efficient with age, they are still healthy and capable. What isn't natural is demanding that our kidneys work overtime our entire lives to offset the acidification of a modern Western-style diet. They didn't develop to handle that level of stress, especially on top of the additional work of filtering toxins from drugs, pesticides, and environmental pollutants.

While we can't go back in time to a pre-industrial environment, we can make different choices about our lives and our diets.

A 2018 study entitled “Acid Balance, Dietary Acid Load, and Bone Effects– A Controversial Subject” looked at studies that supported and opposed the potential for alkali therapy to offset acidification and protect both kidney function and bone mass. Alkali therapy uses supplementation and dietary changes that have an alkalizing effect on the body.

The authors identified age as the determining factor for whether alkali therapy has clear benefits. They wrote:

“Thus, we suggest that those older subjects with diminished renal function, decreased renal acid-excretory ability, and lower buffering capacity due to lower muscle and/or bone mass, whose diets contain high net acid loads could potentially benefit the most from alkali therapies.”3

This analysis both confirms that diet contributes to bone-damaging acidification and that an intervention that focuses on changes to diet and lifestyle to alkalize the body's pH can be especially effective in older adults.

The body's systems for maintaining pH-balance grow weaker with age, resulting in bone loss to make up for the deficiencies of the renal system. Studies have shown that interventions to alkalize the body's pH can prevent damage to the renal system and maintain stronger bones.

Just as humankind must implement changes to reduce ocean acidification and protect coral reef skeletons, so must we as individuals make changes to our own behavior aiming to alkalize our bodies, thus protecting the health of our bones and our overall health as well.

That's the basis of the pH-balanced diet and lifestyle changes described in the Osteoporosis Reversal Program. While protecting your bones from the damaging effects of acidification, you're able to build new bone through exercise and nutrition.

This holistic approach provides both healing and growth, leading to increased strength and wellness that can transform the way you live your life.