Cracking the Truth About Eggs. Could They Affect Your Bone Health? - Save Our Bones

Cracking the Truth About Eggs. Could They Affect Your Bone Health? 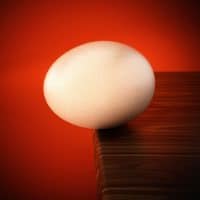 The Medical Establishment is quick to vilify natural supplements and foods, while they rarely, if ever, do the same to drugs, regardless of how dangerous they might be. Take, for example, the humble egg. Many doctors recommend not eating eggs to patients with elevated blood cholesterol levels, typically mentioning that eggs are in part to be blamed for the abnormal test results.

While demonizing the egg, doctors readily prescribe dangerous statin drugs such as Lipitor (atorvastatin), as a treatment to lower cholesterol. Scientific evidence, however, shows that eggs are highly nutritious, do not increase the risk of heart disease and that statins can have grave, and even deadly, side effects. In fact, eggs are listed as an acidifying Foundation Food in the Osteoporosis Reversal Program, thanks to their rich content of B-complex vitamins.

Today we use the egg to take you on a journey that will show you one more reason why you should not trust the Medical Establishment and why you should always search for alternative sources of information.

The Fall Of the Humble Egg

Eggs have long been consumed as part of a healthy diet. However, in 1968, the American Heart Association announced that individuals should restrict their dietary cholesterol consumption to less than 300 mg per day. As part of its campaign, the AHA advised people to limit their egg consumption to a maximum intake of three eggs per week.1 This recommendation came on the heels of scientific research that linked higher levels of cholesterol in the blood to an increased risk of cardiovascular disease. Physicians jumped to the conclusion that the intake of dietary cholesterol increased blood cholesterol levels.

As a result of the recommendations, egg consumption per capita in the United States fell by 30%. However, it was later discovered that dietary intake of cholesterol has minimal impact on blood cholesterol levels.

With mounting evidence regarding the impressive health benefits of eggs, as well as the lack of evidence that egg consumption caused increased levels of cholesterol – particularly the “bad” LDL type, scientists began to question their previous recommendations.2

In the year 2000, the American Heart Association revised its restriction on eggs to one a day but recommended reducing consumption of other cholesterol-laden foods to compensate.

In 2015, the US federal government lifted its recommended cholesterol limit of 300 mg per day. It was replaced with a more lenient stance, eliminating a limit altogether and stating that individuals should consume more vegetables and fruits, and limit their intake of saturated fat and cholesterol as much as possible.

With all this, it’s easy to understand why so many people are confused about whether or not they should consume eggs. Let’s take a closer look at the scientific evidence illustrating why eggs are not only safe but healthy.

The Evidence-Based Truth About Eggs

Several scientific studies have confirmed what the Save Institute has been saying for years: Eggs contain valuable nutrients and can be safely consumed as part of an 80/20 pH-balanced diet.

Some of the most recent and comprehensive studies on eggs have proven the following:

The health benefits of eggs are numerous. As mentioned earlier, although acidifying, eggs are a rich source of bone-smart micronutrients, and for that reason, they are listed as a Foundation Food in the Osteoporosis Reversal Program. One large egg provides approximately 6 grams of protein, and only 185 milligrams of cholesterol, less than previously estimated.

In addition to their rich content of Vitamins A, D, E, and B-complex vitamins, egg yolks contain lecithin, a natural fat that is an essential part of cell membranes. Lecithin’s main component is choline, a nutrient that aids brain development, helps digest fats, and moves wastes and nutrients across the cell wall.

Keep in mind that it’s always best to buy organic and free-range eggs.

The Medical Establishment Got It Wrong… Again!

Take cigarettes, for example. In the 1930s and 40s, the prestigious Journal of the American Medical Association began promoting cigarettes through advertisements in its journal. The television ads went as far as depicting physicians smoking their favorite “brands.” Philip Morris cited research conducted by physicians stating that their brand was proven to be “less irritating.”8 Back then, doctors recommended smoking to improve digestion and reduce stress, even though there was mounting evidence on the negative health effects caused by smoking.

Cigarettes are only one example of many in which the Medical Establishment has “gotten it wrong.” From the popular painkiller, Vioxx, which was finally removed from the market in 2004 after being linked to 60,000 deaths, to the war on dietary fat, there appears to be a disconnect between the evidence and recommendations.

The Medical Establishment Still Gets It All Wrong

While demonizing the egg, the Medical Establishment continues to promote the use of statins to aid in the reduction of cholesterol. Statins are a class of drugs that lower blood cholesterol levels by blocking HMG CoA reductase, an enzyme necessary for the liver to produce cholesterol, and like bisphosphonates, they block the production of Coenzyme Q10 (ubiquinone), a powerful vitamin-like antioxidant that plays many important functions in the body. Ironically, CoQ10 has been shown to improve cardiac health.

In 2016, the US Preventative Services Task Force recommended that all adults over the age of 40 be considered for statins, even those individuals without a history of cardiovascular disease.9 Statins are now the most widely prescribed medication, with one out of every four people in the United States taking them. Yet another example of the disease mongering that harms individuals and society as a whole.

The push to prescribe statins is similar to the continued efforts to promote bone-damaging osteoporosis medications. Savers know, however, that there is a natural and safe evidence-based alternative to build and rejuvenate bones.

In this day and age, it is vitally important that you listen to your inner voice, and that you don’t fall for the loud propaganda pushed by the Medical Establishment. At the Save Institute, we have always relied on scientific evidence to back our claims. The evidence is clear: the right foods have a remarkable ability to heal, build, and restore bones and overall health.

The Osteoporosis Reversal Program guides you to natural resources, all of which are available without prescriptions, and for that reason, without the adverse side-effects that medications can have. The Program offers a holistic approach so that Savers can rejuvenate and rebuild their bones without the use of toxic and dangerous prescription drugs.