3 Bone-Building Foods That Work Better Than Harmful Drugs For Acid Reflux, Arthritis And Migraines - Save Our Bones 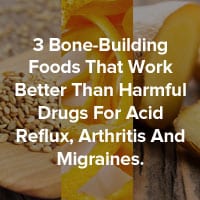 The pharmaceutical approach to healing is rarely challenged in Western medicine. From a very early age, we’re taught that drugs are the answer to whatever ails us, and that doctors, who are given the exclusive power to prescribe these drugs, are not to be questioned.

Thankfully, this acceptance of conventional medical methods is changing. Many patients are dissatisfied with medications that fail to show positive results and that can cause significant harm instead. So as information becomes more widespread, people are actively looking for answers.

So if you suffer from acid reflux, migraines, or arthritis, and you’re searching for natural alternatives to drugs, I encourage you to keep reading – today’s post reveals some effective (and delicious) drug replacements to treat these three common health issues.

Osteoporosis Is Not The Only Health Issue That Can Be Resolved Without Drugs!

What’s really exciting is that science continues to show certain foods and nutrients that really are as effective (or more effective) than drug therapy for treating most health conditions, and they are definitely safer (and more often than not, bone-builders, too).

What’s So Bad About Drugs (Besides Their Side Effects)?

While drugs have different undesirable side effects, the one commonality shared by all pharmaceuticals is their debilitating effect on the liver. This, in turn, can negatively impact bones as well.

You see, the liver is the body’s “gatekeeper” in many respects, acting as a sort of net to catch and remove dangerous toxins before they cause too much damage. Every toxic substance – more correctly, every substance perceived as toxic – must be dealt with by the liver. Many of our modern habits result in this crucial organ being bombarded with toxins on a daily basis.

The liver correctly treats prescription and over-the-counter drugs as toxic substances that must be removed from the body. So taking drugs – especially long-term – can tax and even harm the liver. Considering its many roles in bone health and overall health, liver damage is a very serious matter that carries whole-body implications.

For example, the liver has many metabolic functions. It is responsible for storing glucose as glycogen, releasing it as glucose again when energy is needed. It also helps regulate insulin and break down fats. That’s why the inability to lose weight could be a sign that the liver may not be functioning properly.

Like any filter that works constantly, the liver needs to be “cleaned out” and cleansed every so often. Stepping away from pharmaceuticals and turning to cleansing, healthful foods is an excellent first step.

If you suffer from acid reflux, migraines, or arthritis, then you know how debilitating these ailments can be. People often turn to drugs out of desperation, but given the increasing evidence that these substances do more harm than good, it makes sense to avoid them and seek out safer alternatives. And research shows that the following foods are just as effective as prescription drugs, and certainly much safer.

1. Orange Peel Extract For GERD Instead Of PPIs

Acid reflux and GERD are, unfortunately, quite common disorders. Various antacid treatments abound, from chalk-like chewable tablets to thick liquids. In the early 1990s, H2 (histamine) blockers like Zantac (ranitidine Hcl) came on the scene, but PPIs (proton-pump inhibitors such as omeprazole, lansoprazole, and others) have become the standard medication to “treat” this very uncomfortable and potentially dangerous problem.

PPIs block the production of stomach acid at the cellular level. They inhibit a gastric enzyme known as H,K-ATPase, which pumps hydrochloric acid in the stomach. The digestive system responds by increasing the number of acid-producing cells, which is why “acid rebound” occurs when PPIs are stopped suddenly. In fact, a 2009 Danish study showed that PPIs actually caused heartburn and reflux in people who had never experienced these symptoms before taking the PPIs.1

PPIs also increase the risk of fracture. The ability of these drugs to reduce calcium absorption has been well documented in past studies, and the following 2016 study reinforces and elucidates this fact.

In this study, researchers analyzed the data from 80 healthy volunteers, aged 20 to 45, with no history of osteoporosis or fractures. After following the participants for two years or more, half of whom took PPIs, the scientists found that the group that took the PPIs had lower femoral bone mass than those who did not take the PPIs. After adjusting for age, gender, and other factors, the researchers concluded that:

“…PPI use in subjects without risk factors of osteoporosis…was associated with increased risk of developing osteoporosis and osteopenia in the femur bones.”2

Study: PPIs Can Harm Your Kidneys

In addition, PPIs have been linked to kidney damage according to another recent study published in the reputable JAMA in February 2016. The study involved 482 participants with a mean age of 63 years.

According to that research, taking PPIs increases the chance of developing chronic kidney disease (CKD) by 20 to 50 percent:

Orange Peel Extract In Lieu Of PPIs And Other Antacids

Fascinating new research points to orange peel extract as an effective alternative. Orange peel contains a substance called d-Limonene, which has been shown to eliminate GERD. Studies in humans show that 1,000mg daily of d-Limonene taken every other day relieved symptoms in 20 days, and the symptoms did not recur for six months, suggesting that d-Limonene addresses the underlying cause of GERD.4

It’s also worth pointing out that none of the participants taking d-Limonene reported any unpleasant side effects. D-limonene is available in supplement form at most health food stores and online.

2. Sesame Seeds For Arthritis Pain Instead Of Liver And Bone-Damaging Acetaminophen

Here’s a bone-building food that has another highly-effective application. Sesame seeds were scientifically shown to be more effective than the popular over the counter pain and fever-reducer Tylenol (acetaminophen).5

You may have noticed that every bottle of Tylenol (as do all generic acetaminophen drugs) carries a “liver warning” because of it’s effect on this crucial detoxification organ. Acetaminophen overuse has not only resulted in many deaths annually, but it is the leading cause of acute liver failure in the U.S.

Sesame seeds not only help relieve pain; they are excellent for your bones, packing 88mg of calcium into just one tablespoon of these tasty, alkalizing little seeds.

In a study published in the International Journal of Rheumatic Diseases, 50 people with osteoarthritis of the knee (an all-too-common problem among older adults) were divided into two equal groups. One took 40 grams daily of powdered sesame seeds (a bit less than one and a half ounces), while the second group received 500mg of Tylenol twice a day and 500mg of glucosamine once a day (and no sesame seeds).

Remarkably, after two months of treatment the group that ate the sesame seeds experienced the largest decrease in pain, pointing to sesame’s pain-relieving, anti-inflammatory effects.

3. Ginger For Migraines Instead Of Triptans​

Migraine headaches are frequently treated with a class of drugs called triptans, such as Imitrex, Alsuma, and Sumavel. Triptans are SARIs, or serotonin antagonist and reuptake inhibitors. They are sometimes confused with SSRIs (selective serotonin reuptake inhibitors) and MAOIs (monoamine oxidase inhibitors), so I’d like to clarify the differences in these three classes of migraine drugs.

SSRIs inhibit bone formation and increase fracture risk, according to a Canadian study.6 Serotonin must be inhibited, not prolonged and increased, for bone formation to take place. That’s because serotonin modulates the bone-remodeling effects of parathyroid hormone. It stands to reason that SARIs also increase fracture risk, since their mechanism of action is along similar biological pathways and the result is the same: prolonged, increased presence of serotonin.

According to research published in The Journal of Cell Biology, serotonin “plays antagonistic functions on bone mass as a hormone to inhibit bone formation” while also playing an opposing role of “enhancing bone formation and limiting bone resorption.”7

Instead of these dangerous drugs, the humble ginger root shows promise as an effective migraine treatment.

In a double-blind trial, 100 people who suffered from acute migraines for an average of seven years were randomly assigned either 250mg of ginger powder or 50mg of a drug called sumatriptan, a SARI (50mg is the recommended dosage for this drug). The two substances produced comparable results:

Not only was ginger shown to be just as effective as the drug, but it “poses a better side effect profile than sumatriptan.”8 In other words (and not surprisingly), only 4 percent of study participants experienced minor digestive discomfort with the ginger, while 20 percent of patients taking the drug reported feeling drowsy, dizzy or heartburn.

Fortunately, ginger is a readily available herb that is generally very safe, so consuming moderate amounts or drinking fresh ginger tea and candied ginger root are tasty ways to ingest this pain-relieving root, and are a good place to start.

Ginger is also anti-inflammatory and excellent for your bones.

In this day and age of advanced scientific discoveries, it’s easy to forget about the healing power of foods. At the Save Institute, we’ve always focused on nutrition and the remarkable ability of foods to heal, build, and restore bone and overall health.

Two of the three foods we discussed today are Foundation Foods on the Osteoporosis Reversal Program (citrus fruits are Foundation Foods, but not the peel specifically), and it’s these foods that form the basis for Bone Appétit, the Save Our Bones companion cookbook.

If you’re looking for ways to ease arthritis pain and avoid NSAIDs all the while you’re rejuvenating your bones, for example, look no further than page 32 of Bone Appétit – there you’ll find a recipe for sesame seed-rich Treasure Trove Tahini. Or how about Pineapple-Orange Salsa (page 52), containing a whole tablespoon of grated fresh ginger to stave off migraine pain?

As you can see, the nutritional drug-free approach opens the door to enjoy creative and delicious ways to heal!