3 Natural, Non-Toxic Substances That Work Better Than Drugs For Alzheimer’s, Pain Relief, And Wound Healing - Save Our Bones 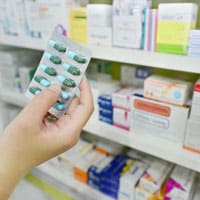 If you’ve been diagnosed with osteoporosis or osteopenia, the only treatment option you were most likely given by your doctor was a prescription drug. This lack of choice, along with common medical scare tactics, can make you feel trapped between taking a dangerous drug and succumbing to weakened bones and dreaded fractures.

But there’s good news! You’re not trapped, and there are safe, effective, drug-free options for all sorts of health challenges in addition to osteoporosis, such as the three natural alternatives we’re going to look at in today’s post: Vitamin E for Alzheimer’s, St. John’s Wort for pain relief, and chamomile for ulcers.

So for those of you looking to break free from (or avoid altogether) the Medical Establishment’s vicious cycle of treating symptoms with drugs and their side effects with more drugs, rejoice! Not only are the following three substances safe, bone-healthy, and backed by scientific research, they are actually more effective than drugs.

Among the neurodegenerative diseases that plague elderly adults, Alzheimer’s disease is one of the most common. Drugs like donepezil and galantamine are typically prescribed to “enhance cognition,” but with side effects like hives, fainting, seizures, chest pain, and vomiting – and the fact that these drugs do nothing to prevent the progression of neurodegenerative diseases – many people wish to avoid them.

Vitamin E was shown to be quite effective at delaying the progression of neurodegenerative diseases, particularly Alzheimer’s, in rats. Researchers induced the degeneration of brain tissue to mimic Alzheimer’s, and then evaluated levels of Alzheimer’s “markers,” such as homocysteine (tHcy), insulin-like growth factor (IGF-1), and tumor necrosis factor-α (TNF-α) after the rats were given Vitamin E. The rats were also given acetyl-l-carnitine (ALC) and α-lipoic acid (LA).

These natural substances “restored the above mentioned parameters to about normal levels comparable to those of donepezil,”1 the study authors report, providing “evidence for the importance of dietary supplementation in delaying the progression of age-related neurodegenerative diseases.”1

There is more good news – Vitamin E is abundant in many Foundation Foods, such as sunflower seeds, almonds, turnip and collard greens, asparagus, olive oil, and avocado.

To get more details on how to get more brain-protective (and bone-building) Vitamin E in your diet, please read this post on the latest research about Vitamin E and bone health: Just Confirmed: This Vitamin and Powerful Antioxidant Keeps Muscles And Bones Strong.

This herb may sound familiar to some of you as a natural remedy for depression. But St. John’s Wort is also a highly effective pain reliever, according to a study where mice were injected with an extract of the plant. The scientists observed “a significant analgesic effect”2 – 75 percent, in fact – which the researchers declared “twice more potent than Ibuprofen.”2

While I don’t suggest injections of St. John’s Wort extract, it is easily obtained in liquid or capsule form, and the dried herb itself can be made into a tea. St. John’s Wort can also be used topically. According to The University of Maryland Medical Center, St. John’s Wort is antibacterial and antimicrobial, and “when applied topically, it may relieve symptoms associated with minor wounds and skin irritation.”3

I love a soothing cup of chamomile tea. Given its wound-healing properties, chamomile soothes more than just jangled nerves.

According to a two-pronged study (in vivo and in vitro), chamomile is more effective than corticosteroids at promoting the healing of ulcers. While the study does not specify where the research rats’ ulcers were located, it’s likely this was a reference to oral ulcers, since these are typically treated with corticosteroids.

For the in vitro part of the study, cultured fibroblasts treated with chamomile “presented the smallest cell viability.”4 For the in vivo study, 125 rats with ulcers were divided into two groups: one that received chamomile and the other whose ulcers were not treated.

The study does not specify what form of chamomile preparation was used, although the researchers do point out that they used chamomilla recutita, also known as German chamomile. This species of chamomile is easily obtained in health food stores and online in tincture or dried form. For oral ulcers, a strong tea used as a mouthwash would be a good method of application, as would washing skin ulcers with the tea.

The Healing Power Of Clinical Nutrition

It brings so much peace of mind to realize that nutritious foods and plants are powerful healing agents without the side-effects and bone damage induced by drugs!

It’s truly remarkable (not to mention encouraging!) to discover how many prevalent health issues have natural solutions. For example, curcumin and saffron are highly effective anti-depressants, and the herb lemon balm is efficacious as an anti-anxiety remedy. Three ailments that plague so many people – reflux, arthritis, and migraine headaches – can be safely treated with three simple foods.

If you haven’t read our previous posts on this exciting topic, here are two more in addition to the links above:

So if you don’t want to take drugs for osteoporosis or any other health condition, you’ll surely find it comforting to know that you have natural, more effective options! And what’s even better is that…

Drug-Free Options Can Be Delicious And Easy To Prepare!

The world of healing foods is colorful, flavorful, and full of potential. The long-awaited Save Our Bones cookbook, Bone Appétit, celebrates the connection we have with food as a healing substance. You’ll find over 200 pH-balanced recipes for breakfast, lunch, dinner, snacks, and desserts, and you’ll love the variety.

Bone Appétit shows you how to “treat” yourself with delicious foods, and gives you the confidence of knowing that you’re feeding your body to improve the health of your bones and your overall health.