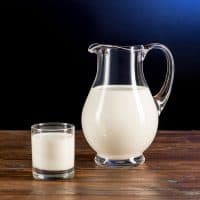 We've been told since childhood that drinking cow’s milk is necessary for good health. It's supposed to help build strong teeth and bones. You probably remember the long-running commercial that promoted milk because “it does a body good.”

Fortunately, Savers know that nothing could be further from the truth.

Cow's milk may be good for calves, but it is detrimental to humans. Drinking milk causes calcium loss in two ways: the animal protein in milk promotes calcium excretion in the urine, and its high phosphorus content binds to calcium, preventing its absorption.

And while the hormones naturally present in milk help a calf grow healthy and strong, these same hormones can cause serious imbalances in humans. And last but not least, since milk is acidifying, it increases fracture risk.

Why Drinking Milk Is Never A Good Idea

Modern medicine, which does not focus on nutrition, ignores the evidence of the damage milk can do to our bodies, recommending it routinely as a “healthy” food for growing children.

As adults, many people find they can no longer digest milk because they are “lactose intolerant.” In fact, the majority of the population cannot properly digest milk. To read more on this fascinating topic, please read this previous article, where you’ll find the scientific studies that back up the above statement:

Because most people cannot digest milk, they experience an inflammatory response. And, as Savers know, drinking milk also harms your bones. At the Save Institute, we recommend replacing cow’s milk with alkalizing almond milk.

The majority of people cannot properly digest milk, and experience inflammation when they drink it. Because milk is known to harm bones, we would all do well to avoid ingesting it at any age.

A large scientific study conducted in 27 countries among 29 populations found a strong correlation between cow's milk consumption and the development of multiple sclerosis (MS).1

MS is a central nervous system disease in which the immune system attacks the myelin sheath, the covering that protects nerve fibers and allows them to communicate with the brain and spinal cord. Once these fibers are exposed, the nerves deteriorate. Symptoms vary depending on the individual and which nerves are affected.

According to conventional medicine, there is no known cause or cure for MS. Yet the study found a significant link between cow's milk and the clinical appearance of MS.

A later study on the role of diet in treating MS suggests people with this illness should avoid milk because of “molecular mimicry”: that is, the proteins in milk mimic those innate to the body, disrupting the body's communication pathways. In susceptible individuals, this autoimmune interference would cause the body to reject its own protective sheath.2

Multiple sclerosis is a progressive disease caused by the deterioration of the myelin sheath that protects nerve fibers. Without this protective covering, communication with the brain and central nervous system breaks down.

A global research study found a significant correlation between cow's milk and the appearance of MS symptomatology. A second study found milk proteins can cause the body to reject its own myelin sheath.

Milk Proteins Increase The Risk Of Breast And Prostate Cancer

Milk plays a critical role in increasing cancer risk, due to the fact that high intake of dairy protein boosts the level of insulin-like growth factor-1 (IGF-1) in the body.3

IGF-1 is a naturally occurring hormone, primarily produced by the liver, that helps promote bone and tissue growth and development, especially in childhood.

However, like any hormone or other naturally occurring chemical substance, it can be harmful in excess. Because it is a metabolic growth factor, excessive IGF-1 can lead to tumor development.

Recent research has shown that a concentration of IGF-1 is positively associated with an increased risk for both breast cancer in women and prostate cancer in men.

The study authors write that:

“These observations have led to the hypothesis that high intakes of protein from dairy products might increase the risk for some cancers by increasing the endogenous production of IGF-1.”3

In fact, another study has shown that too much milk is deadly: three glasses or more a day can result in premature death.

Dairy proteins increase IGF-1, a naturally occurring hormone that boosts bone and tissue growth in childhood but can be dangerous in excess, particularly after adulthood is reached. Research has shown increased levels of IGF-1 promote tumor growth.

Cow's Milk Is A Trigger For Insulin-Dependent Diabetes

Contrary to the popular though misinformed belief that milk is good — even essential — for children, studies have shown that milk consumption can cause Type 1 diabetes, also known as insulin-dependent diabetes (IDDM), a chronic autoimmune condition in which the pancreas produces little to no insulin.

Typical IDDM onset occurs in childhood or adolescence and requires insulin injections to maintain proper blood sugar levels and bodily functions. The medical profession maintains Type 1 diabetes has an unknown etiology and no cure, although genetics, geography, and environmental factors are thought to play a role.

IDDM, especially if improperly managed, can be quite dangerous. Over time, the build-up of glucose in the bloodstream can affect the heart, kidneys, nerves, and eyes, causing life-threatening complications.

Researchers who compared age-standardized rates of diabetes and cow's milk consumption in various countries found a strong correlation between the two, leading them to conclude that cow's milk contains a triggering factor for the development of IDDM.4

Although the medical profession maintains that Type 1 diabetes (also known as juvenile onset diabetes, or insulin-dependent diabetes, IDDM) has no known cause or cure, researchers found a strong correlation between milk consumption and IDDM, concluding that milk contains a triggering factor for IDDM.

Milk Is One Of The Worst Food Allergens

As Savers know, keeping the liver healthy is key to bone health and overall health, since just about every substance we take into our bodies must pass through the liver. Allergic reactions are just one sign of an overtaxed liver — and milk is one of the top allergens.

Food allergies are the immune system's response to a trigger. Common food allergens include milk, shellfish, peanuts (and other nuts), soy, wheat, and dairy.

Even with dairy as a known allergen, milk has been marketed so effectively for generations that parents generally assume they must include it in their child's diet for healthy growth. This reliance on milk often continues into adulthood, when people routinely add a carton or a bottle of milk to their grocery-shopping basket.

Yet according to a scientific study across age-stratified respondents, milk caused the strongest allergic reaction! Quoting from the study:

When we ingest food or beverage that can cause harm, our bodies react by producing symptoms of distress. If you drink milk and have been plagued with strange aches and pains, tiredness, and brain fog, for example, your body is probably alerting you that it does not metabolize milk well.

Milk is a potent allergen that can cause a wide range of symptoms, from fatigue, aches and pains, to more serious digestive and health issues. In self-reported studies, scientists found milk to be the highest reported allergen, exceeding shellfish, peanuts, and egg. Giving up milk will ease the burden on your liver and help restore your overall health.

Give Up Milk to Reclaim Your Health

The bottom line: when you stop drinking cow’s milk, you'll not only help to avoid MS, cancer, diabetes, and food allergies, you'll also improve the health of your bones, bring your hormones back into balance, and reduce your exposure to a number of toxins. Your bones, your gut, and your liver will thank you!