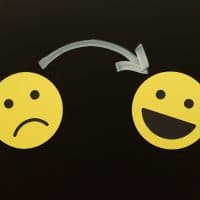 As advancing age brings increasing anxiety about fractures– made worse by the doomsaying and diagnostics of the Medical Industry– the anxiety itself can make you feel older than your age. In fact, the strain of anxiety does take a toll on your health and your bone density.

Part of the motivation for building stronger, fracture-resistant bones is to regain the confidence of youth and to be happy.

Today we’ll look at five techniques to feel younger and happier in your day-to-day life. They’re all backed up by evidence gathered through scientific studies. Try a few (or all five!) and discover the difference they can make in your life.

Overwhelmingly, participants reported that engaging in an activity or mindset that they consider childlike or youthful made them feel younger, happier and healthier.1 These activities ranged from nostalgic pastimes like playing favorite childhood board games, to simply letting loose and getting silly with a loved one, or on their own.

People cited making silly faces and voices, playing practical jokes, driving with the music turned up loud, blowing bubbles through a straw, and mimicking others among the actions that connected them with a youthful mindset.

Dr. Arrol noted that existing research has shown that nostalgia acts as a buffer against depression, and works to increase social connectedness, which is linked to healthier behaviors. Dr. Arrol adds:

“Perceiving ourselves as younger than our age is linked to a more future-orientated outlook, which means that we make better health choices such as engaging in exercise and healthy eating.”1

Lowering stress, engaging in physical activity, and a balanced diet are all essential components for building stronger bones. Who would have guessed that dedicating some time to silliness could help you prevent fractures!

Researchers at the University of British Columbia conducted a two-week study on nearly 400 participants to determine the emotional and psychological impact of engaging with the natural world.

They split the participants into three groups. One group was asked to take photographs of the natural world they came into contact with over the course of the two weeks, then write about the emotions or thoughts that arose. Another group was asked to do the same, but for human-made objects. The third group served as a control and was not given any instructions.

Here are the results, as published in The Journal Of Positive Psychology:

“Post-intervention levels of net positive affect, elevating experiences, a general sense of connectedness (to other people, to nature and life as a whole) and prosocial orientation were significantly higher in the nature group compared to the human-built and control groups.”2

The positive impacts mentioned in the quote above were the result of engaging with whatever natural elements were already present in the participants’ day-to-day lives.

A study published in the journal Medical Humanities examined the mental health benefits of group singing. British researchers followed participants in a community singing workshop called Sing Your Heart Out aimed at both the general populace and those with mental health conditions.

The purpose of Sing Your Heart Out was to provide a therapeutic group activity that would improve the quality of life and mental health condition of the participants. Researchers evaluated the effect of the workshops through 20 interviews with participants, two focus groups with organizers and participative observation over the course of 6 months.3

In a news release about the study here’s what lead researcher Professor Tom Shakespeare said:

“All of the participants we spoke to reported positive effects on their mental health as a direct result of taking part in the singing workshops. We found that singing as part of a group contributes to people’s recovery from mental health problems.”4

This success is in part attributed to the structure of the workshops. The choir was a low-pressure environment where people could come together and do something fun without the high stakes of a public performance, and without the emotional labor of talking about their conditions. It created an opportunity to be social and build community, which in turn improved participants confidence, function, and mood.

Sing Your Heart Out isn’t just for those seeking therapeutic programs to help with mental health conditions. It’s also open to the public and has proved a source of joy, personal expression, and social engagement for the entire community.

Seek out a local choir at a community center, church or music school to take advantage of the life-altering benefits of raising your voice in joyful harmony. (And don’t worry, it’s not about hitting the right notes!)

We all know that a nap can provide the extra energy you need to make it through the day. Now we know that the right kind of napping can also make you happier.

Research conducted by Professor Richard Wiseman from the University of Hertfordshire draws the connection between power naps and improved mood. For this study, he interviewed 1,000 participants about their napping habits and happiness self-assessment. He divided the respondents up into Short Nappers (those who nap less than 30 minutes at a time), Long Nappers (those whose naps exceed 30 minutes) and No Nappers.

These results align with research that has confirmed the health effects of napping, as summated by Professor Wiseman:

“Naps of under 30 minutes make you more focused, productive and creative, and these new findings suggest the tantalising possibility that you can also become happier by just taking a short nap.”5

So next time you’re feeling burnt out and worn down, set the alarm for a short nap to give yourself the boost you need, and reclaim the rest of your day with increased energy and improved mood. It might be just what you need to get in your regular dose of bone-targeted weight-bearing exercise, or to cook your own bone-healthy dinner.

5. Reverse Frailty And Depression Through Diet And Exercise

This study comes from the National University of Singapore, where researchers undertook a four-year study to examine how changes to diet and exercise could reduce the rate of hospitalization, mental decline, and early death in physically weak elderly people.

The researchers worked with 250 participants aged 65 or older, randomly divided into five groups with different regimens:

The participants’ level of frailty was assessed before the trial began, then at the halfway point and again at the end of the study.

Ultimately, each of the individual interventions produced positive results on the physical and cognitive health of the participants, as did the combination of the three interventions. Participants increased their walking speed, improved muscle strength (which is critical for new bone growth), had fewer cognitive problems and saw reduced levels of depression.6

Indeed, as little as 150 minutes of exercise a week sharpens memory and prevents dementia. New evidence from researchers at the Mayo Clinic confirms that for people diagnosed with Mild Cognitive Impairment, just two sessions of exercise per week can improve memory and cognitive function, slowing any eventual progression toward dementia.7

Powerful Tools At Your Fingertips

It may seem obvious that exercise and an improved diet will make you stronger, sharper and happier. Yet unfortunately, few doctors will make these tools their primary means of helping people to live fuller, healthier, longer lives.

These powerful, holistic lifestyle changes — backed up by reams of scientific evidence — are foundational to the Osteoporosis Reversal Program. When you incorporate the simple and straightforward steps suggested in the Program, you’re not just working towards preventing fractures and stronger bones; you’re improving the health of your entire body.