How To Beat Seasonal Allergies Without Harming Your Bones 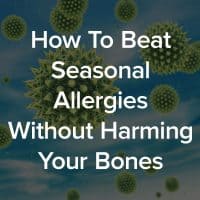 With the warmer weather come many exciting outdoor activities: leisurely picnics, hikes through forests, beaches or mountains, and everywhere you turn, flowers are blooming and golden pollen floats gently on the breeze. Actually, that last part might cause more problems than pleasure.

For as much as 30% of the world’s population, hay fever is a seasonal hassle that can turn what should be one of the most enjoyable times of the year into an itchy, runny, sneezy mess. And the culprit might even be inside your own home!

Today we’ll have a look at seasonal allergies, what causes them, and natural, bone-friendly ways to prevent and manage the symptoms. You’ll learn what to look out for and how to reduce the bothersome effects of hay fever without resorting to acidifying, bone-harming pharmaceutical drugs.

Read on to breathe easy this spring!

What Is Hay Fever?

You have probably heard and perhaps even used the expression ‘hay fever’ without really understanding exactly what it’s referring to. That’s no wonder given that this colloquial name is a bit of a red herring.

Hay fever does not occur in response to hay, and fever is not even one of the symptoms! Scientists prefer the term “allergic rhinitis” to describe this allergic reaction, though many lump this set of symptoms under the catch-all “seasonal allergies.”

Itchy eyes, nose, throat or ears, a congested nose, sneezing, wheezing, hoarseness, irritability, and even hives are the most common symptoms of seasonal allergies. It can also cause coughing, sinus pressure or headaches, postnasal drip, decreased sense of smell, snoring, fatigue and even asthma. At first the symptoms may resemble the onset of a cold, but they appear only after exposure to an allergen.

The allergen in question is pollen, released into the air by plants, typically in the spring or fall. Some definitions limit hay fever to a response to the pollen from wild weeds, like ragweed, but it’s commonly used to describe the symptoms created by a much wider set of irritants. The reason these harmless bits of floral matter trigger an allergic response in certain people is a protein they contain, which is misidentified by the body as a dangerous intruder.

While many sufferers have been dealing with this affliction since childhood, it is possible to develop hay fever at any age. Although it usually becomes less severe with age.

Spring has arrived earlier than usual this year, as much as two to three weeks early across much of the Southeast, according to a study led by the U.S. Geological Survey. So this year’s pollen season is likely to be longer and more intense than in recent history.1

What Should I Avoid?

Since most plants release pollen as a part of their reproductive cycle, the list of culprits is fairly extensive. Many trees, grasses and weeds send their pollen swirling on the wind in the hopes with the purpose of fertilizing a plant of their species. In the process, we end up breathing an awful lot of it!

Trees produce a rather large amount of pollen in their quest to propagate. Maple, elm, cedar, birch, alder, oak, walnut and ash trees contribute copiously. When they finally start to ease off, the grasses pick up.

Bermuda, Johnson, Kentucky bluegrass, timothy, fescue, orchard and sweet vernal are all grass species to avoid. That said, grasses have a relatively low pollen count, so most people experience a reprieve in this mid-summer June to July time frame.

Mold also contributes its fair share of irritants around this time. Allergy-inducing molds may grow indoors and outdoors. The outdoor varieties can be found around rotting vegetation and logs, in soil, in compost, or on grains and grasses. They’re not producing pollen, but the spores contain proteins that can trigger an allergic response. The most common molds guilty of this are alternaria and cladosporium, both of which grow both indoors and out.

Then in the late summer into the fall, weeds start to pollinate, including the biggest offender: ragweed. It not only produces a ton of pollen, but its allergy- triggering protein is released particularly fast once the pollen enters the body. Because the plant flourishes in disturbed soil, it often grows in cities, where there is also a slightly warmer environment.

Could My House Plants Be Triggering My Allergies?

While your indoor greenery can improve the air quality in your home, certain plants produce pollen that can cause your allergies to flare up.2 During the season, the last thing you want is the same irritants indoors. Here are some otherwise lovely indoor flora you should avoid:

If you’re curious about the severity of allergens created by other plants, you should look up that species’ OPALS Score. OPALS stands for Ogren Plant Allergy Scale, and it measures the potential of plants to cause an allergic reaction in humans. The scale considers all sorts of reactions, not just pollen allergies, so be sure to do the background reading about your plant!

How To Avoid Seasonal Allergies

Knowledge is your first line of defense against seasonal allergies. If you’re an allergy sufferer, figure out what you’re responding to by paying attention to the time of year, time of day and what is blooming around you. Once you have a sense of the culprit and when it’s at its most bothersome, you can avoid being in proximity to it while it’s at its worst.

The above list of plants is another source of knowledge to tap, so avoid them if you are prone to getting hay fever symptoms, and if you’ve already brought some into your home, it might be a good time to make a change.

Monitoring pollen counts, typically posted online in weather reports, provides information so when the counts are high, you can pick an indoor activity for the day. Keeping an eye on the weather can help you plan for this too. Schedule gardening activities and open-air excursions after a rainfall. You’ll find the air has been washed clean, and the wet plants are less likely to send any new pollen until they’ve dried out.

When you’re inside, keep your windows closed, and consider air conditioners or air purifiers to keep your home free of irritants. If you’re particularly sensitive, it might be wise to leave your outer layer of clothing in a separate room.

If you need to go outside at an inopportune time, wear sunglasses that provide a large area of protection. A little vaseline on the interior of the nostrils can help to catch the pollen before it wreaks havoc.

Eat Your Way Out Of Allergies

It shouldn’t be surprising to learn that making easy changes to your diet can combine with the tactics described above to help you avoid allergic reactions to all sorts of sources. Here are some effective suggestions:

On top of being an alkalizing food, mustard greens contain vitamin C and beta-carotene. They are anti-inflammatory and their nutrients help break down excess histamine in the body.

While the old “an apple a day” might be just a wives tale, the healthful properties of this fruit are very real. Apples are a rich source of several foundation supplements including a flavonoid called quercetin, which has been shown to stave off allergic reactions by “blocking” the release of histamines.4

This popular spice contains a compound called curcumin that has been shown to keep allergic responses in check as well as reducing the inflammation that plays a large role in the discomfort of allergies.5

Even though green tea is acidifying and contains some fluoride, when consumed in moderation, the antioxidant content of this soothing beverage makes it a good choice to help build bone. It also contains allergy-relieving, bone-healthy catechins. These compounds prevent the conversion of histidine to histamine in the body, reducing allergic reactions.

Probiotics are an important part of a bone healthy diet, have been shown by studies to improve allergic rhinitis symptoms, and thereby increase the quality of life of sufferers.6 This is an easy and doubly useful solution because of the many significant other health benefits of probiotics.

Thanks to so many effective, natural actions to prevent and manage allergy symptoms, there’s no need to take a pharmaceutical quick-fix drug. And as Savers know, the same applies to osteoporosis and osteopenia. The Osteoporosis Reversal Program details the research-based actions you can take to strengthen your bones without the dangerous side effects of osteoporosis drugs. The success stories of Savers who have reversed their bone loss continue to pour in.

Allergy medicines have undesirable side effects and are acidifying, burdening your body with rebalancing itself by stealing nutrients it needs for other purposes, including new bone formation.

For those reasons, it’s not advisable for anyone attempting to build their bones to take unnecessary medications. That applies to both seasonal allergy pills and ineffective, toxic (and dangerous) osteoporosis drugs. Have a look at what the Osteoporosis Reversal Program has to offer towards an integrative, 100% natural path to improved health and younger, stronger bones.